Don't use plagiarized sources. Get your custom essay on
“ Alone on a Wide, Wide Sea Michael Morpurgo ”
Get custom paper
NEW! smart matching with writer

Throughout the novel a key is used to represent hope and luck. The reader becomes aware of this when Arthur felt a sadness so deep within, but felt too that Just as long as he had kittys key he would be alright. ‘ The key causes Arthur to feel strong in his time of need. Having the key there is a reassurance that even though times are tough, there is always a bright side. Similarly, as Arthur says ‘it would be lucky for me’, it brings the same luck to his young daughter Allie.

When Allie is out on her expedition to England, to bring back a long lost family member, she keeps the key there in hope that it would bring the same luck that it brought her father. Each character seems very dependant on the luck the ‘lucky key brings. The ‘Ancient Mariner’ is a symbol of courage and family togetherness for many characters in this novel. This becomes clear when Allie continuously recites the ‘Ancient Mariner’ on board ‘Kitty four’, which ‘gave her a new determination every ime she read it out loud.

Reciting the ‘Ancient Mariner’ results in Allie feeling more connected with her deceased father and the sea itself. This connection causes Allie to confide in herself and her ability to accomplish her goals. Likewise, when Arthur recites the poem for Aunty Megs on her birthday her eyes were full of tears and full of love’. The ‘Ancient Mariner’ brings Arthur, Marty and Aunty Megs closer and their shared love for this poem results in them uniting as a stronger family.

Throughout the novel a boat is used to represent love and trust. This becomes evident when Arthur builds a boat for Allie ‘so they could each do what they love to do best together’. Arthur builds this boat for Allie because he knows how much it would mean to her to sail to England, which has been her dream ever since she was a little girl. The gift is also to prove to his daughter that he trusts she is ready to take on the dangerous seas.

The creation of the boat, as well, brings them closer together s they have not only the building to discuss and plan, but the expedition itself. During the adventurous novel an albatross is used to represent hope. The reader becomes conscious of this when Allie is on ‘Kitty four’ to England and sites an albatross. From that day on the same albatross visits her almost everyday, and shortly after this Allie begins to believe that it is her father ‘keeping an eye on her, doing with her what he always wanted to do with her’. Seeing the albatross everyday 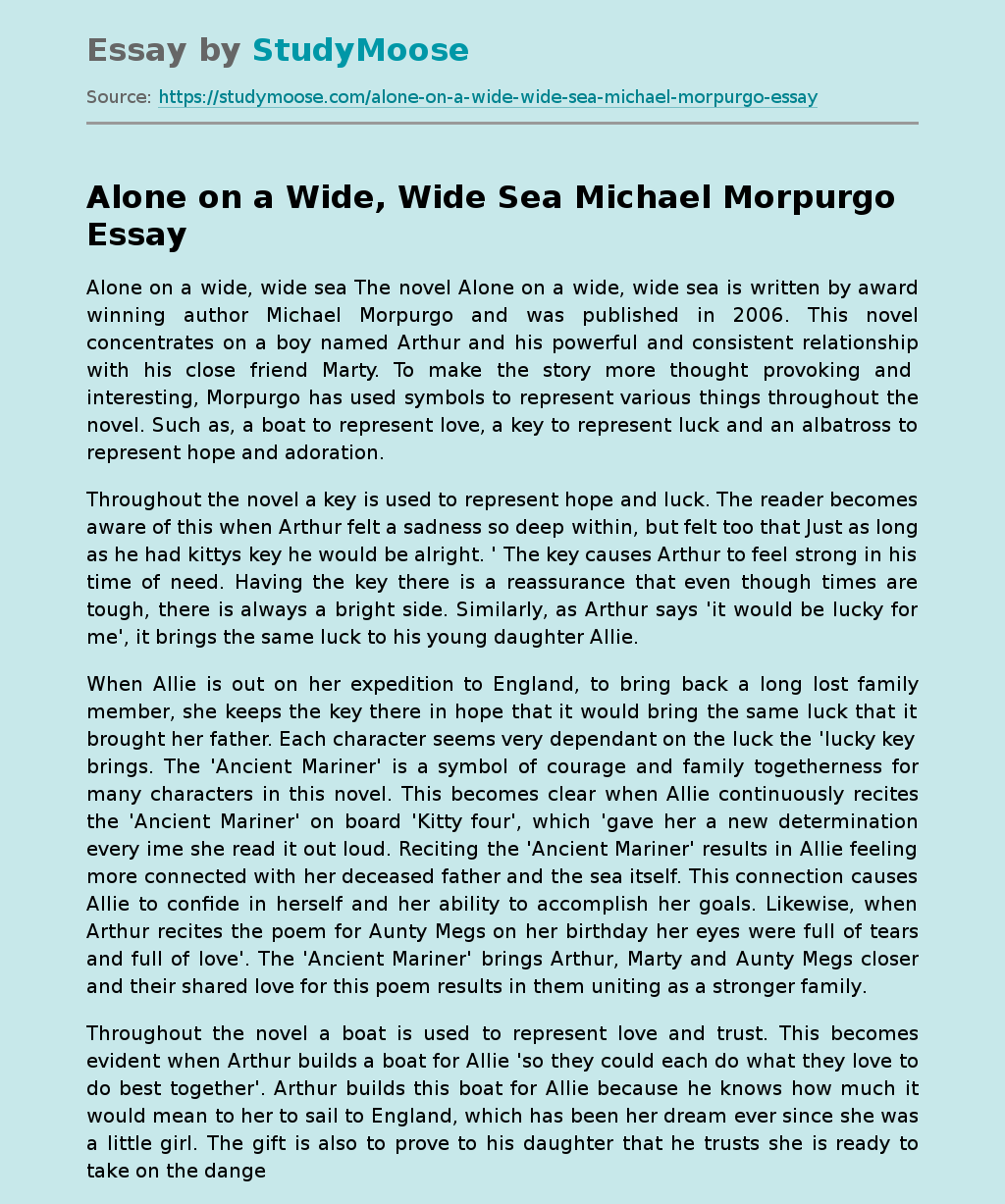