The Rediscovery of Crime Victims Essay

The late 1950’s and early 1960’s brought in a time of restoration for crime victims. For centuries they were disregarded and left behind to deal with what happened to them on their own. Somehow the victims of crime had gone unnoticed and the criminal had gotten all the attention. However, with thanks to several entities, the focus on the victim has been reclaimed and they are getting the help they desperately need and want. Self-help advocates, social scientists, journalists, criminal justice officials, and law makers are credited for helping to point out this crucial problem.

Don't use plagiarized sources.
Get Your Custom Essay on The Rediscovery of Crime Victims Just from $13,9/Page

Individuals from each group gathered together to deliberate about this issue and what could be done to fix it. These deliberations are how crime victims came to be rediscovered along with several other critical factions. During the 1970’s a social movement emerged. This movement consisted of activists, support groups, and advocacy organizations, which campaigned for, among other things, victims’ rights. The belief of these social entities was one of empowering the victim instead of leaving them feeling defenseless and out of control.

One way to empower them was to provide crisis centers and shelters with experienced and loyal professionals who have first-hand knowledge and comprehension of the many different processes that the victim might encounter. These processes might include the legal system, medical assistance, or financial claims. Three larger and more notable movements are responsible for the victims uprising. They are the law-and- order movement, the women’s movement, and the civil rights movement. The law-and-order movement focused on rising crime rates and fought for tougher policies against violence and theft of street crimes.

The women’s movement focused primarily on female victims who were hurt by males and did not get the help they needed afterward. They are responsible for setting up the first women’s safe house in St. Paul, Minnesota. The civil rights movement focused on protection of victims against bias crimes. It was influential in campaigning for harsher penalties against individuals whose attacks were fueled by discrimination. The social movement isn’t the only faction credited for the rediscovery of crime victims; elected officials also played a role. Legislators involved in establishing laws have aided in the rediscovery of crime victims.

The 1980’s brought about a time of naming laws after individuals who had endured extreme hurt due to crime, which was usually highly publicized. The legislators used this publicity as a useful way to gain support for passing laws related to the crime and for reelection purposes. Some popular examples are Megan’s law, which is named after a seven year old girl slain in 1994 by her neighbor, who was a habitual child molester. This law orders convicted sex offenders to register with the local police department and that community residents be notified.

Another such example is Caylee’s law, which is named after a two year old girl who wasn’t reported missing for 31 days. This law makes it a felony for a parent or legal guardian to fail to report a child missing, especially if it is known that the child is in danger. These laws will be instrumental in future similar cases. Another major faction in the rediscovery of crime victims is the news media. The news media perhaps merits the most credit for rediscovery of crime victims. Previously, it is the offender who received the media attention.

The stories would go on about what kind person they are, what they had done, and what kind of punishment they should receive and the severity of it. Now we still see the stories about the offender but the victim is also part of the story. The stories include how they were harmed, what they lost, their mental state during and after the crime occurred, how their families were affected, and how they and their case has been managed in the criminal justice system. Finally the victim is given a face and a name. They are no longer just a shadow in the background.

Victims now have a say in how their cases are managed and in what the outcome should be. The news media can also be guilty of fabrication at times, especially if the victim or offender dies. They may publicize things that they may not have otherwise published if they had lived. It turns into a matter of ratings and no longer a matter of human interest, which puts the victim’s family in the middle of some unwanted publicity. News media can lose their respect for an individual’s privacy, in order to exercise their First Amendment right of freedom of the press.

People do have a right to know about crime, especially if that crime may affect their lives but the news media must report it in a careful and respectful manner. There have been social movements, elected officials, and news media, who have all played their part in the rediscovery of crime victims, so let’s look at one final contributor, commercial interests. Commercial interests play its part in the rediscovery of crime victims by selling them security products and services. Companies that sell security products and services make their money by playing on a crime victim’s fear.

They make and sell their products flashy and make claims about how impressive their products are to draw the victim in to buying their product. Many companies will market a much greater selection of different products and bolster the claim that their product is the best. The victim will buy the product or service that they feel is the most effective without any regard for price. It is amazing what a crime victim will pay just to feel safe again. As you can see there are many contributors to the rediscovery of crime victims.

They each have advantages and disadvantages. The goal of each one is recover victims who shouldn’t have been forgotten about. The hope for the future is that current victims and new victims get the help they need, the help that they deserve. Bibliography Caylee’s Law. (2012, November 16). Retrieved October 19, 2013, from Nationsl Conference of State Legislatures: http://www. ncsl. org/research/civil-and-criminal-justice/caylees-law. aspx Karmen, A. (2013). Crime Victims: An Introduction to Victimology. Belmont: Wadsworth, Cengage Learning.

The Rediscovery of Crime Victims. (2016, Jul 11). Retrieved from https://studymoose.com/the-rediscovery-of-crime-victims-essay 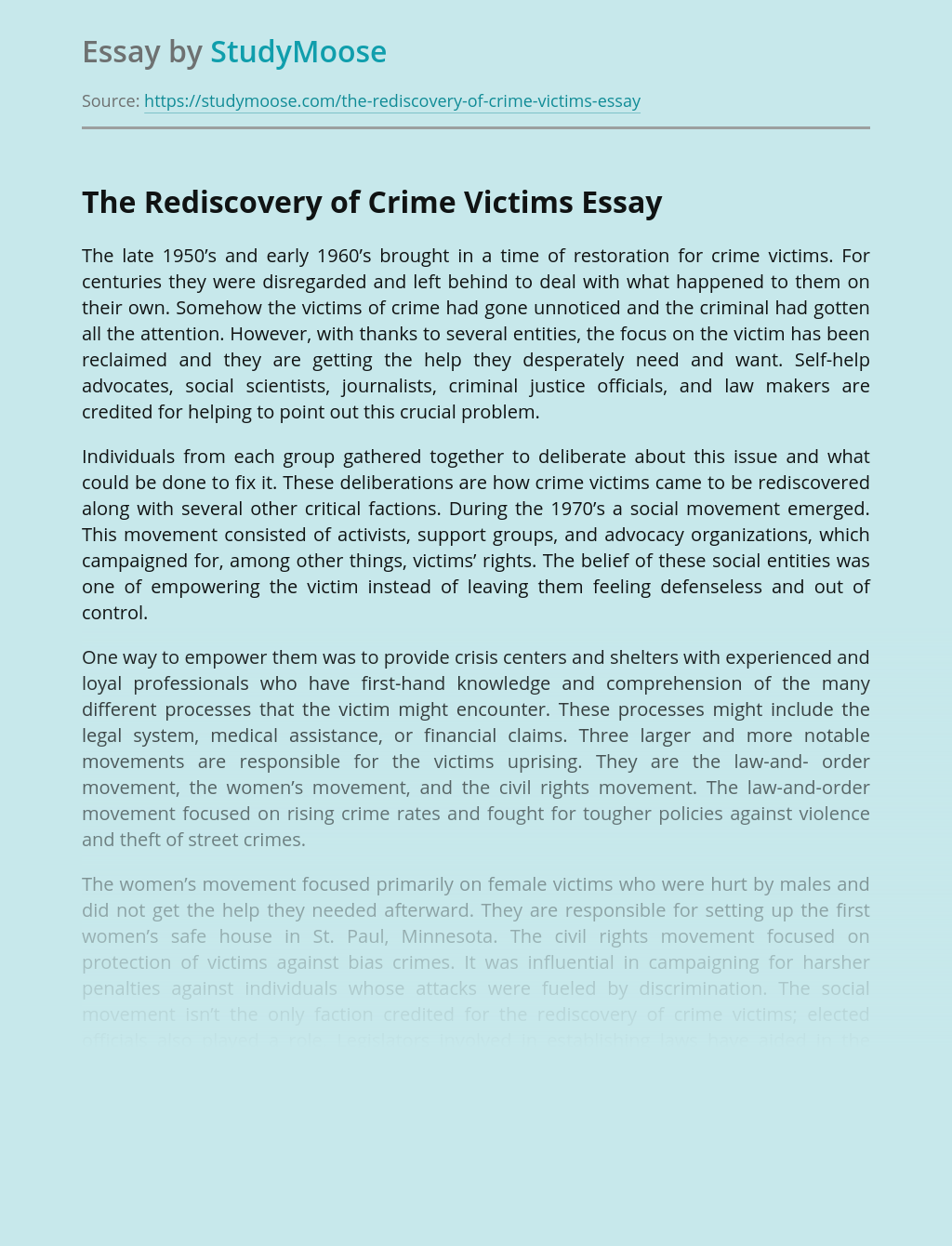 Tuesday, April 20, 1999, was a turning point in the lives of many Columbine students and families. Eric Harris and Dylan Klebold, two former students at Columbine High School, went to school on that day for one purpose, to annihilate the school building as well as the student body. Although Eric and Dylan’s bombs did... VIEW ESSAY

View sample
Get Essay
Stages of Crime- an overview

Criminal law is a body of rules and statutes that defines conduct prohibited by the state because it threatens and harms public safety and welfare and that establishes punishment to be imposed for the commission of such acts. Criminal law differs from civil law, whose emphasis is more on dispute resolution than in punishment. The... VIEW ESSAY