Othello presents women as the victims of men

To what extent do you agree that in “Othello” Shakespeare presents women as the tragic victims of men?

Throughout ‘Othello’, Shakespeare uses the manipulation of the protagonist, by the antagonist, Iago, to present a play controlled by men. In such a male dominated society, Shakespeare presents the women in the play as tragic victims at the hands of their husbands, in particular Desdemona and Emilia. Throughout this essay I will relate to the Aristotelian and Senecan descriptions of tragedy to come to a conclusion of how in ‘Othello’ Shakespeare presents women as tragic victims of men.

+84 relevant experts are online
Hire writer
Turn in your highest-quality paper
Get a qualified writer to help you with
“ Othello presents women as the victims of men ”
Get high-quality paper
NEW! AI matching with writer

Firstly, throughout ‘Othello’ Shakespeare presents men as the dominant characters of the play, whereas the women are portrayed as characters to always be suspicious of. No female character is given as many lines in the play as any male character, in particular Iago. This is reflective of Iago’s dominance in ‘Othello’, therefore meeting one of the Senecan definitions of tragedy presenting women as tragic victims of men. Furthermore Othello’s suspicious nature towards his wife, Desdemona, is false, and though the women are constantly thought of cheating, they never do. In act 3 scene 4 of the play Desdemona claims that Othello is “true of mind”.

The dramatic irony of that statement once again implies that Desdemona is a character who follows social conventions, yet her husband’s false accusations relate to the Aristotelian definition of tragedy in the Desdemona is pitied by the audience due to her pure feelings of love towards Othello. The use of the adjective “true” further shows Desdemona as a tragic victim of Othello as she is unaware of Othello’s beliefs that she is cheating on him with Cassio, which is false.

Though women may be portrayed as tragic victims in ‘Othello’, Emilia gives the audience reason to believe that women are far from tragic victims in the play. She challenges social convention in that women should be passive to their husbands. In defiance of Iago’s “Be wise, and get you home”, Emilia here opposes the model of a “good” wife, who should be silent and marginalised. Though Emilia is undoubtedly ultimately a tragic victim of the play, she reveals how corrupted a male dominated society is when she clears Desdemona’s “reputation”. Her death opposes an immoral conviction against her sex, exonerating her part in the tragedy.

In act four scene three of the play, Emilia implies that she is equal to men, which suggests to the reader further that she is a character who once again defies society’s expectations of women. Emilia criticises the way men behave, in which she asks “have we not affections/desires for sport-and frailty-as men have?” claiming that women’s needs are just the same as men, although it is acceptable for men to cheat on their wives. This is supported earlier in the play when Emilia likens men’s behaviour to that of belching, which itself is a vulgar activity. “they are all but stomachs, and we all but food/they eat us hungerly, and when they are full/they belch us” this corrupt truth is also reflective of how men treated women, and that it was ok for men to cheat on their wives, but had women done the same, it would have been considered a sin. On the other hand, Emilia could be interpreted as a tragic victim at the hands of men in ‘Othello’. As oppose to Desdemona’s marriage to Othello, Emilia’s marriage to Iago has lost all signs of romance and affection, and her victimisation could be interpreted through her satirical attitude towards men.

Her death at the hands of Iago, her manipulator, shows that Iago was truly to blame for Othello’s murder of Desdemona, as it was him whom Emilia stole Desdemona’s handkerchief for. Her death is therefore her punishment, furthermore making Emilia a tragic victim as she has died through no fault of her own. Like Emilia, Desdemona is also a tragic victim of the men in ‘Othello’. Her murder, like Emilia’s, is through no fault of her own is a result of Othello’s jealousy and Iago’s interference. What makes Desdemona even more tragic to the audience is the fact that even in death she tries to protect her husband, telling Emilia that she has killed herself, “nobody, I myself”, this further depicts to the audience that Desdemona is a good and pure character. Her devotion to her husband makes her a tragic victim in the play as she can not be blamed for her death. Contextually it is important to understand how women are presented as tragic victims of men in ‘Othello’.

Contemporary views of women were, according to Sir Thomas Elyot “to be mild, timorous, tractable, benign, of sure remembrance, and shamefast.” Conversely men were seen to be “fierce, strong in opinion, covetous of glory, desirous of knowledge, appetiting by generation to bring for his semblable.” Elyot’s views of the contemporary man, though much grander than those of women, could prove to be their downfall in ‘Othello’. Shakespeare’s protagonist’s downfall could be based on the fact that he is desirous of knowledge, and Iago’s manipulation of Othello’s trustworthy nature suggests that not only are women the tragic victims of men, but it is men who are also victims of men. The use of derogatory language and coarse sexual imagery is used by Shakespeare to show the male character’s misogynistic attitudes towards women, and this is evident whenever Iago speaks of the opposite sex. His lamenting of Desdemona, a character who is pure and good throughout the play, particularly portrays how women are presented as tragic victims of men. He tells Brabantio that “a black ram is tupping your white ewe”, referencing Othello and Desdemona’s romance.

The contrast of black and white suggests that Iago views Desdemona and women in general as guilty beings, which further suggests to the audience that women are tragic victims of men in ‘Othello’ as it is the men who are guilty, not the women. Desdemona’s father, Brabantio, holds a highly misogynistic view towards his daughter upon hearing of her affection for Othello, when he answers the question “is she dead?” with “aye to me”. Iago also views women as objects- “look to your house, your daughter and your bags”, his materialistic view of women, in which equating Desdemona to material good, suggests that Iago is a misogynist as he does not hold women in high regard at all. In conclusion, women are certainly presented by Shakespeare as tragic victims in ‘Othello’, however it is not completely at the hands of the male characters. Yes, both Emilia and Desdemona die at the hands of their husbands, but it is through society’s expectations of women that they are murdered, as well as Iago’s evil manipulation of The Moor.

Desdemona dies through no fault of her own, this making her a tragic victim at the hands of Othello, as she has not committed any sin, and she is only murdered through Iago suggesting to Othello that she had been cheating on Cassio. Desdemona is also a tragic victim as not only has she done nothing wrong, but throughout the play she is portrayed by Shakespeare as a genuinely good and pure character. Emilia is a tragic victim as ultimately she dies from knowing that Desdemona’s murder was due to the actions of her husband. Finally it was the women who were tragic victims at the hands of a society where the man is judge, jury and executioner, as well as manipulating them to satisfy their selfish needs.

Othello presents women as the victims of men. (2016, Apr 27). Retrieved from https://studymoose.com/othello-presents-women-as-the-victims-of-men-essay 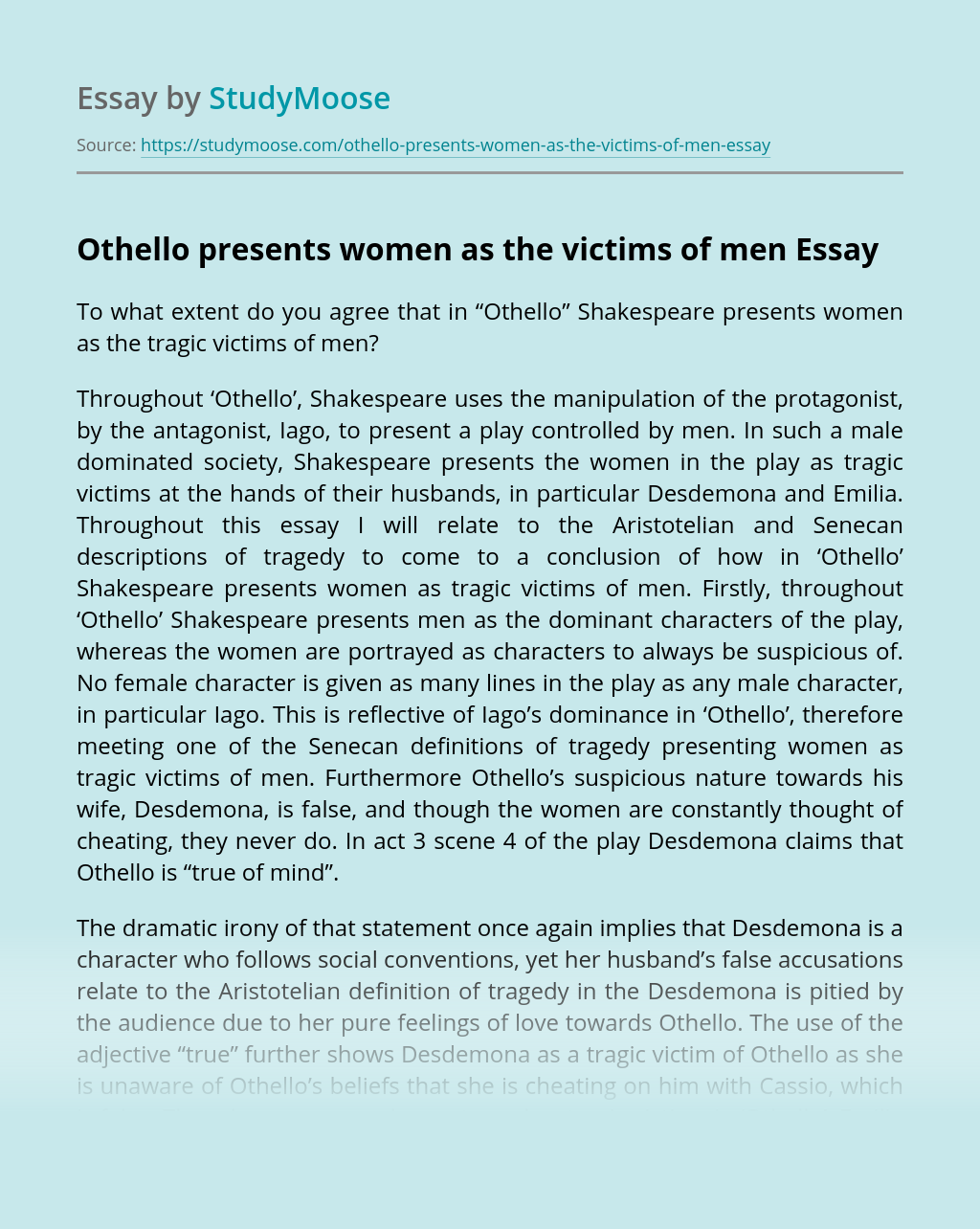 Turn in your highest-quality paper
Get a qualified writer to help you with
“ Othello presents women as the victims of men ”
Get high-quality paper
Helping students since 2015
Stay Safe, Stay Original