The Chutzpah Academy of Higher Education (CAHE) was established in 1999 AD. Since then, in nearly two decades some notable milestones which have been achieved are; continual increase in the approved quota of student enrollment, ADDIN RW.CITE{{doc:5d843b64e4b074875bbee8c9 Bruks,I 2011}}(Bruks, Weatherston et al. 2011) addition of an undergraduate program , publishing of a journal, move to own premise and an alumni base of more than 2000. Founders & mentors associated with this institution since its inception, believe that CAHE has underachieved given the expectations and potential it is endowed with.

Don't use plagiarized sources. Get your custom essay on
“ The Chutzpah Academy of Higher Education (CAHE) was established in 1999 AD ”
Get custom paper
NEW! smart matching with writer

Expectations not being realized is evident from the outcomes CAHE has, as well as not, achieved. For instance, enrolment trend of last couple of years have been ominous; the institution has been unable to complete the quota of approved student enrollments. Design and delivery of student experience, visibility and promotion of the academic portfolio, the research culture, a vibrant campus life, academia – industry network, and confident, motivated, engaged and inspiring staff, it is believed are all in state of comatose.

The industry entry barriers are low; number of ADDIN RW.CITE{{doc:5d843975e4b0d34d33267116 Costley,Carol 2010}}(Costley, Elliott et al. 2010)Higher Education Institutions (HEI’s) in Nepal has grown strongly in recent years – 705 new HEI’s were established between 2005/06 and 2012/13 alone. As of 2015/16, there were 777 private, 532 community and 98 constituent colleges throughout the country. With globalization and international mobility a norm rather than exception, the option for studying in an HEI beyond Nepali borders is as easy as enrolling for higher education within the borders of our own country.

The British Council, in a recent study has noted that by 2027 Nepal will be one of the top ten countries with the strongest growth rates in outbound mobility along with countries like China, India, Pakistan, and Nigeria. In midst of blurred lines between domestic and international industry rivalry, standing tall and as first choice among the students will get ever more Herculean with each passing academic session for CAHE.

It is estimated that the total number of students enrolled in Higher Education in the year 2016 in Nepal stood at 0.36 million, of which an overwhelming majority (88.3%, about 0.31 million) were enrolled in Bachelor’s programs. Further to this, if we take into consideration that in the year 2014/15 the percentage of student graduates only in Management Faculty when compared with total student graduates stood roughly at about 46%, it gives us enough base of student learners to target.

Another challenge would be the pattern of student distribution across universities within Nepal. Based solely on sheer numbers Tribhuvan University (TU) seems to be the destination of choice for higher education with 78% of total graduate students. TU is followed by Pokhara University (PokrU) and Purbanchal University (PurU) each with 9% while Kathmandu University (KU), has the least share of the pie with only 4% of the total.

A related issue would be strength (% of students) of Management Faculty in a university’s portfolio. 64% of total graduate student are in Management Faculty for PokrU. PokrU is followed by TU with 46%, PurU with 40% and KU with only 21%.

The statistics above give an overview of the landscape from which to source current approved annual enrollment quota of student learners. In addition, if we take cognizance of a recent study done by educational consultants Hobsons, which questioned 62,366 students from 65 universities around the world, high-quality teaching and the availability of scholarships were two of the most important factors (30 and 29.9% respectively) that students looked at when choosing an institution for their higher education, we have fair idea of how the student experience has to be packaged. The same study also lists quality of teaching staff, high graduate employment rate, and up-to-date technology and online learning options (69%, 52%, and 49% respectively) as the major indicators of quality education provided by the concerned institution.

Teachers have a critical role in establishing credence of a learning center. Aristotle, we know from historical accounts ‘taught’ at The Lyceum, while few would know the name of the institution where he studied – Plato’s Academy. Closer to our geography and context, Chandragupta – the famous Mauryan Emperor and Charak – famous for his contribution to Ayurvedic medicine might have studied in Taxshil, but Taxshil is more readily associated with Chanakya who taught there. We do not need to cite a string of research, just our experience even if anecdotal, is evidence enough that for morphosis of learners into better thinkers and scholars, for confidence in their own abilities and for their re-integration into the society as worthy contributors; quality of interaction between faculty and learners is of critical significance.

Staff and faculty, if on one hand are expected to be more student-centered and responsive to students’ needs and concerns, then on the other hand, part-time nature of their employment challenges them to juggle research productivity, student interaction, their positions across multiple institutions and their own personal lives. This socio-economic reality entails that faculty are forced to behave in reverse priority of their expected roles – Developer, Mentor & Expert. Most limit themselves to Expert, with very few venturing into Mentorship and negligible taking on the role of a Developer. Faculty spread is thin in terms of frequency as well as quality of interaction.

Qualification, nature of tenure and activities undertaken by faculty are crucial in judging academic institutions worth can also be evidenced from the importance given to them in rating scales designed by various accreditation/regulatory bodies. In UGC-Nepal’s scale of ranking academic institutions of higher education, the weight (out of 100) allotted to Research, Publication & Qualification is 20, while a similar scale – National Institutional Ranking Framework developed by Ministry of Human Resource Development, Government of India, assigns a cumulative score of 35 to similar parameters.

Getting closer to CAHE’s vision will be highly contingent on the staff and faculty entrusted with the task; therefore, attracting and retaining outstanding staff & faculty will be critical. Commitment to selection must be purposeful and ongoing development of its internal talent an important agenda in the scheme of things. As an employer, CAHE’s commitment to providing full opportunity to all qualified persons regardless of ethnic origin or religion and welcoming candidates with diverse backgrounds, are precursors to it becoming an institution of first-choice for all concerned stakeholders.

CAHE is sufficiently endowed; the programs it currently offers are affiliated to the best university of the country, ownership of ideally located premise, a presence of two decades and an alumni base of 2000 plus to name a few. Despite, there is amiss between where CAHE stands today and the heights it can achieve. Given the state of affairs of higher education in Nepal; high outward mobility of students, heavily skewed enrollment statistics of higher education in favor of Tribhuvan University, low industry entry barriers leading to new entrants easily coming into the competitive landscape etc., need to be urgently navigated. Possible internal chronic ailments in aspects such as design and delivery of student experience, visibility and promotion of the academic portfolio, the research culture, a vibrant campus life, academia – industry network, and confident, motivated, engaged and inspiring staff, must be diagnosed and a clear prognosis established.

CAHE cannot afford to let the search for a strategic inflexion thrust be a mere “cosmetic ideology”. Foundation to un-becoming of “cosmetic ideology” must start with a search for indicators (concepts) of excellence on which to build a sustainable excellent organization. The concepts once identified and agreed upon will serve as unifying attributes which perpetually inspire all concerned in the strive for excellence; both individual as well as collective. However, only when the indicators are related in a cause-and-effect schema with transparent and efficient mechanism to assess excellence achieved will they be readily understood and willingly applied. A disclaimer here is pertinent: unless Board and Top-Management jointly commit themselves ADDIN RW.CITE{{doc:5d843b27e4b074875bbee8bf Koontz,Harold 2010}}(Koontz 2010)towards the cause, most probably at levels unprecedented in CAHE’s history, the whole exercise will be like losing the substance while grabbing at the shadows.

The Chutzpah Academy of Higher Education (CAHE) was established in 1999 AD. (2019, Nov 24). Retrieved from http://studymoose.com/the-rationale-example-essay 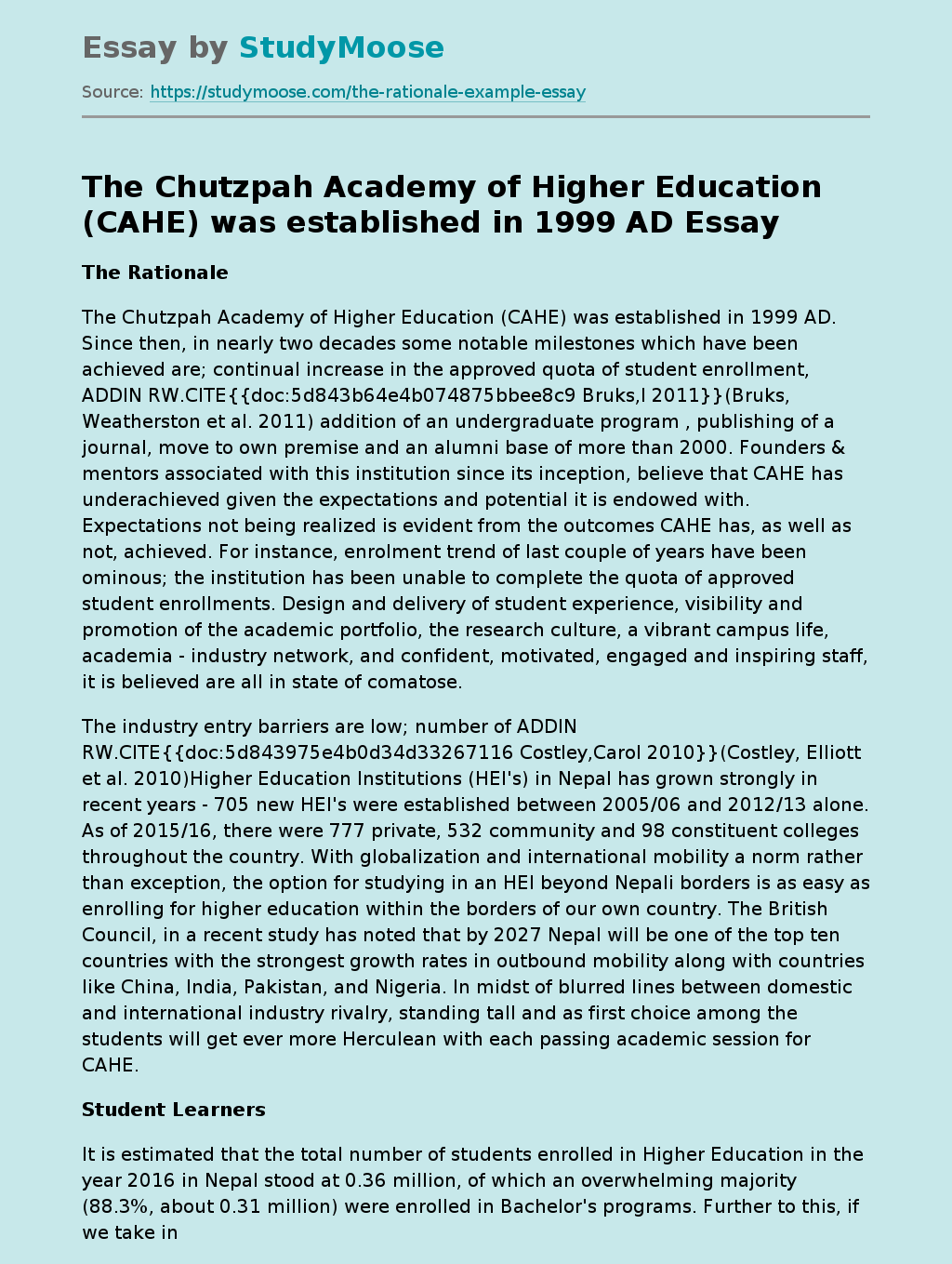