“As exemplified by the city government of Marikina, the development of the riverbanks depends mainly on the local government. The political will to evict people from illegally built establishments and structures and to maintain the developed areas along the river has driven local governments to lengthy debates with concerned groups. In addition, funding for the construction and maintenance of parks The PRRC sketch design of the Pasig River in the future along the river is scarce.

This is aggravated by the fact that the zoning ordinance that stipulates that waterways must have a 10 meter clearance on both sides, is hardly put to effect” – “Case Study III – Pasig River, Philippines” by: Renato T.

Cruz. Last July 17, 2010, the class as fundamental requisite for the completion of the course in Urban and Metropolitan Administration and Development in Masters in Government Management – Executive Special Program (MGM-ESP), Pamantasan ng Lungsod ng Maynila under Professor Gilbert Lozada toured the stretch of Pasig River.

Boarded in a Ferry Terminal the class at about 9:00 a.

m. as filled with eerie of feelings and excitement anticipating of what it might see the condition of “Dying River” and when it will ultimately come back to life. Urban and Metropolitan Administration & Development – Batch 2010 To my dismay and to borrow the words of Menchit R. Santelices retired Information Officer IV, Philippine Information Agency article on Pasig River “the Pasig of Maria Clara’s time is a far cry from the Pasig River we see today. No thanks to the more than 300 factories and the homes of 10,000 families lining the banks of Pasig which have virtually turned the river system into a waste basin”.

In the present situation, the Pasig River is one of the greatest casualties of the movement of large and high degree of concentration of people in Manila attributable to Urban Revolution. Currently, its waters are very turbid, and became more and more silted with organic matter and non-biodegradable materials. This is obviously not suited for life, and as of 1991 study by the Department of Environment and Natural Resources (DENR) only six species of fish and two types of plants can tolerate the polluted waters.

Relatedly, the focus of this reaction paper is to identify the root causes of the decay of the River and determine what the government did and should do more to address this problem. The chief reasons of the river’s deterioration are industrial pollution, solid and liquid waste dumping, and urban migration. It was determined that about 315 of the 2,000 or more factories located beside the river are the principal polluters of the water, most of which are in the textile and food manufacturing industries.

Domestic liquid waste also contributes a huge amount of pollution load in the river, as the wastewaters discharged into the river’s many tributaries are directly deposited without being treated first. And most noticeable is the increasing number of squatter colonies living beside the river. These inhabitants do not have proper waste disposal systems, and their refuse is directly deposited into the river. By and large, the banks of the Pasig River are lined by shanties consisting of approximately 12,000 households.

About 2,000 families live in houses on stilts or under the bridges, in sub-human conditions, where they present a danger to themselves and to the vessels using the river. These settlements have no sanitary facilities and their liquid and solid wastes are discharged straight into the river. Urbanism and the various subcultures existing in Metro Manila result in many problems that reflect the complex socio-economic characteristics of the city. With the continuous dumping of wastes, the river bed has become more and more silted with organic matter and non-biodegradable rubbish.

This results in serious flooding along the river, affecting nearby communities and carrying polluted water to the households living close to the river. Factories near the Pasig River Shanties beside the river and under the bridge Urban development basically is the not problem but a solution. The building and rebuilding of permanent structures over land near the river for purposes of creating or producing of the built environment is part of the growing industrialization of the metro cities and therefore inevitable. It is not therefore about urbanization, globalization, and free trade , but comprehensive planning, organization and discipline.

Yet, for centuries the Pasig River has been used, abused, and neglected. Since the early 1500s, commerce and day-to-day needs have pressed Pasig and its tributaries into tireless service. The river has now been declared a critical water body because of the unspeakable amount of waste dumped into it daily by households and industries. About 330 tons of industrial and domestic wastes are discharged everyday in this waterway, depleting the biochemical oxygen needed to support marine life. Until recently, little has been done to protect the river system.

Past efforts to rehabilitate Pasig river were unsuccessful because they failed to take into account the larger context of the urban environment of which Pasig river is a part. To solve this perennial problem, Pasig River Rehabilitation Program (PPRP) was created. It aims to upgrade the environmental state of Pasig within 15 years. Its scope of work includes projects that focus on commercial, industrial, and household pollution; solid waste management; squatter resettlement; waterways dredging; hauling sunken barges; riverside development; and public awareness.

Apparently, the rehabilitation of Pasig River became one of the priority programs of government premised on the principle that sustainable development is a key element in providing people with a clean and healthy environment. The Pasig River Rehabilitation Commission (PRRC) was created pursuant to Executive Order No. 54. It deals primarily on management, rehabilitation of the river and regulation of the dumping of untreated wastewater and solid waste on the waterway. It also involves resettling squatters along the Pasig and the development of parks by the riverside.

The PRRC adopts the goals of the Pasig River Rehabilitation Program, especially that which includes relocating squatters in the river area, developing parks, keeping watch on industries along the river, and monitoring water quality. The relocation of squatters is consistent with the “no relocation, no demolition” policy. Moreover, Presidential Decrees No. 600 (1974) and 979 (1976), or the anti-marine pollution laws, are the bases for prosecuting river polluters, including those that pollute the Pasig tributaries.

The government, through the DENR, vigorously implement pollution control laws, rules, and regulations including the apprehension and imposition of penalties on violators of these laws. It has likewise initiated linkups with the private sector like the Sagip Pasig Movement and the Piso Para sa Pasig which have been most helpful in community organizing, promoting community-based waste management program, and launching beautification projects on policy in implementing its socialized housing program for squatters. In summary, these are government measures to save Pasig River from rot. 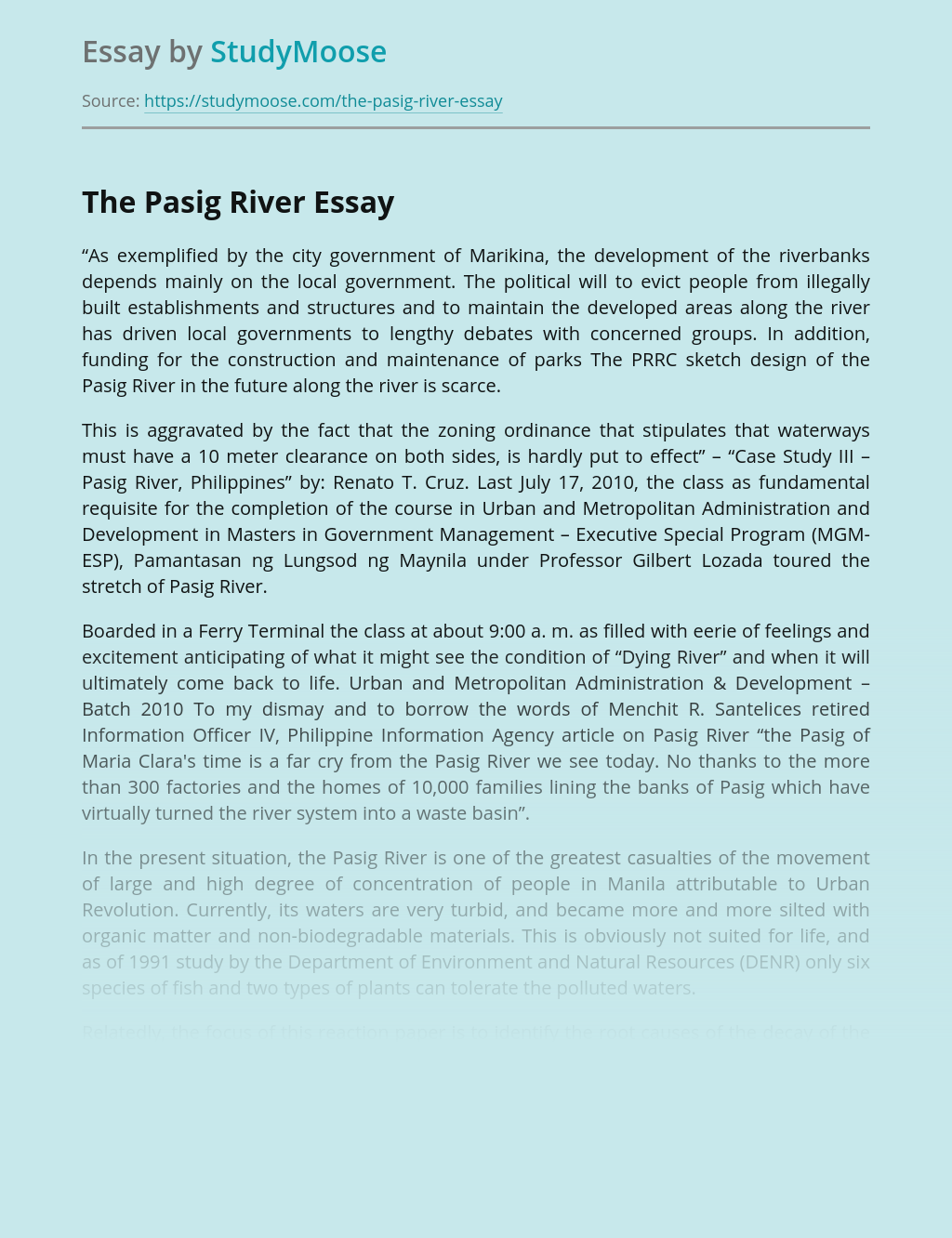