The Party’s Over by Richard Heinberg

The Party’s Over: Oil, War and the Fate of Industrial Societies book by Richard Heinberg tells us how and when the beginning of energy declination takes place, and make series of suggestions in overcoming the phenomenal issue.  Chapter 1 says the importance of energy and how are we using it.  Chapter 2 elaborates the evolution of energy consumption.  Chapter 3 focuses on the prediction of a certain M. King Hubert, US geologist, who by using his own method says his study of the oil peak to be occurred sometime in the middle of the 20th century.  Chapter 4 enumerates some alternative fuel to oil such as natural gas, coal, nuclear power, wind, solar power, hydrogen, hydroelectricity, geothermal power, tides and waves, biomass, bio-diesel, ethanol, fusion, cold fusion, and free-energy devices.

However, the book also says that although there have many options, nothing in the list is perfectly created yet as substitute for oil energy.  Chapter 5 discusses the consequences we are going to face should the oil energy continues to decrease and the harm we could probably encounter in our day to day living with the kind of life our generation has.

Chapter 6, the final Chapter entitled Managing the Collapse, intelligently suggests strategies and recommendations stating that it could be done even by one individual, one’s home and family, community, country, and even the global level.

The book basically is to introduce us the concept of oil energy’s peak era as well as the fossil fuel’s reduction and falling down period.

I agree to Richard Heinberg’s points of view and study as it is very timely and very informative, to the point that every reader can be seen this book as an eye opener to change various ways in his lifestyle.

How rising prices and shortages will affect me and the American society?

As the law of supply and demand says the higher the price is, the demand tends to be lower.  Shortages of supply will take place and the lifestyle of every American consumer including me will also suffer as the usual budget gets smaller and smaller.

What was the most important idea I gained from this book?

Honestly, only after further reading of this book, I do not have any idea that there is a possibility of depletion in oil and petroleum consumption and that those fossil fuels are threatened to subside.  That is the most important idea I gained from reading this book The Party’s Over because it is really an awakening on my part.

How should we respond to the oil shortage as individuals, city, state, and nation?

If we believe in the oil declination phenomenon, we should also do some actions such as lessen our energy consumption to help save fossil fuels.  That is the only possible thing as a positively response to the oil shortage.

US President George Bush on his April 2005 speech make an appeal to the public especially to American people.  He makes series of initiatives in energy consumption.  These include putting more oil refineries and nuclear plants.  He also encourages American to have another alternative fuel usage in helping reduce oil spending.

Some of us do not believe in Bush’s policy.  I myself either.  For me, it is not the best possible way.  It is merely politically motivated.  His proposal will not help change my current energy consumption.  It could be useful in some other ways such as companies and industrial oil expenditures, but not in most individuals who are still dependent on oil energy alone and does not have any knowledge and alternative resources to help save oil spending other than lessen its consumption level.

While media, authorities and people participate in a long-running debate about the same topic of energy consumption and the ways to minimize it, here comes an informative book that will help us understand the nature as well as the upcoming problems to balance each one’s points of view.  I therefore agree to the views of the author that each one of us has its own fair share of sacrifices and effort for us to overcome this phenomenon of energy running out.

The Party’s Over by Richard Heinberg. (2017, Mar 28). Retrieved from https://studymoose.com/the-partys-over-by-richard-heinberg-essay 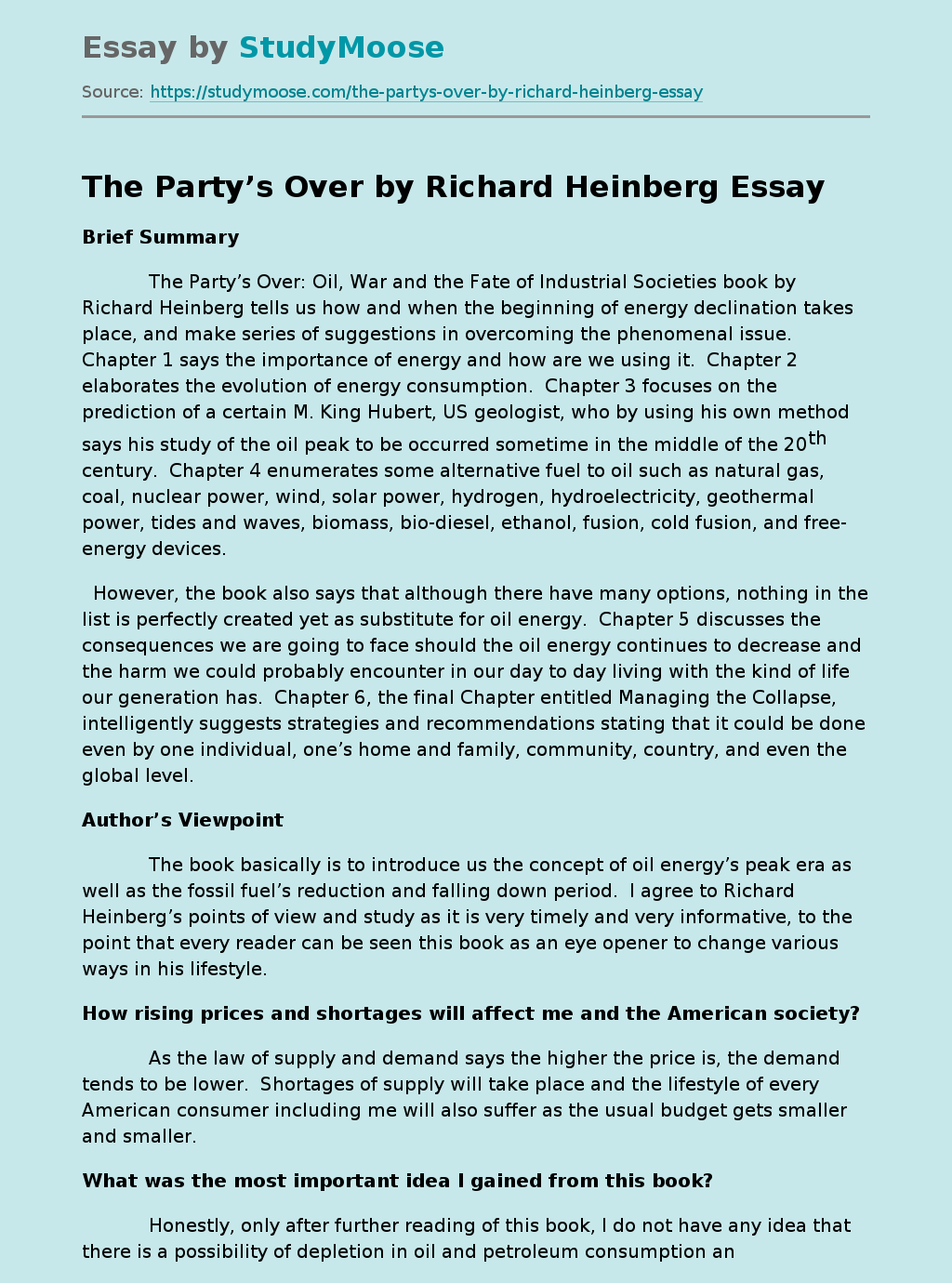