A Comparison between British and Indian Political Party Systems

It is a cardinal truth that party system has now become an inseparable part of the political tradition of any country. But due to the differences in perception, values, outlook, beliefs, culture, party system varies from country to country. Thus, some countries are dominated by a single party, some others have developed a two-party system, but still others have evolved a multi-party one.

Of course a comparison between India and Britain will make the issue crystal clear. India had been under the British rule of nearly two centuries and, hence, it was legitimately expected that they would have some basic similarities in political system and structure.

Don't use plagiarized sources. Get your custom essay on
“ A Comparison between British and Indian Political Party Systems ”
Get custom paper
NEW! smart matching with writer

But, as a matter of fact, their political system has engendered queer dissimilarities in practical politics.

But Sir Jennings has aptly shown the folly of such contention. According to him, the real function of the opposition is to oppose the wrong policy of the Government and to support its beneficial actions.

This is why often the Prime Minister and the opposition leader meet together and discuss the matters of public importance. They even try to formulate common policy and draft the Bills on the basis of an agreement. In this connection, Sir Jennings observes, “Many proposals of the Government are not opposed, because there is general agreement” (p. 89).

During two World Wars, two major parties sunk their differences and worked together through the War-Cabinet. Even during the peace time, they come nearer in order to fight out national crisis. Thus, when in 1931, the Labor Prime Minister, Mr. Ramsay MacDonald, “…intended to resign due to a split in his party, the cabinet was saved by the Conservative Party which joined it in order to avert a constitutional crisis (Majumder, p. 375).

This ‘National Government’ functioned till 1936 without any internal crisis and it clearly indicates that the political culture of Britain has taught the leaders to unite together during any national crisis. Sometimes, the point of view of two different political parties was opposite. But the Prime Minister allowed the Conservative Ministers to express their own view. This is known as ‘Agreement to Differ’.

But political system in India is quite different. The Government hardly listens to the Opposition and the later, in its turn, is never friendly to it. While the former depends upon it brute majority, the later is depended upon a policy of obstruction. The discussions in the Parliament, thus, often become a “worse than a primary-school debate” (Sikri, p. 184). The opposition leaders are sometimes arrested or abused or humiliated in an unseemly manner. In fact, politics of power in India has thrown the Government and the opposition to two hostile camps and nothing seems to be unjust in such tussle. For example, in 1999, the Central Government was ousted by one vote in an ugly manner.

But the parties in the opposition which united together in order to topple the Cabinet, could not tie up for forming a new one. Similarly, the Central Government of every political color has lavishly used Art 356 of the constitution with a view to dismissing the state governments formed by the opponents. Thus, between 1950 and 1996, such President’s Rule was promulgated 93 times for political reasons (Source: Lok-Sabha Secretariat, India). In this sense, it can be held that the central weapon has been more abused than used. In other words, a constitutional, lacuna has often been exploited by the power mongers at the Center in order to let the opponents down.

Secondly, the British political system has also convinced the leaders to give more importance to public service than to party interest or personal gains. Thus, in 1923, Bonar Law, the Prime Minister, resigned on grounds of health. But in India, the leaders are more concerned with power – they are prepared to retain or snatch it by means, foul or fair.

If they can capture power, they try to stick to it till death or defeat. It is to be remembered that in 1834, Lord Melbourne, the British Prime Minister suffered a setback due to a split in his party. He then asked the King, William IV, whether or not he would remain in his office. Acting upon the royal advice, he actually stepped down. But in India, neither a Prime Minister nor a Chief Minister quits his office in this way. It too suggests that political system in India is quite different.

Thirdly, Britain has a two-party system. However, Ogg admits that, “…besides the Conservative party and the Labor Party, there are also the Liberals” (p. 552). But, in fact, the liberals faded out during the nineteen thirties. But, in India is a multi-party system. In 1991, 445 parties registered their names with the Election Commission. True that, at the beginning, the Congress dominated the political scene and, consequently G. Austin held that, “The Congress was India and India was the Congress” (p. 8).

Truly, India had “one-dominant party-system” (Morris-Jones, p. 174). But gradually, various parties based on religion, region, localism, language, caste, creed and personal ambition came up in rapid progress. In fact, the “…diversities of population have now created a pluralistic society and this mushroom growth of political parties has affected Indian unity in an alarming way” (Rout, p. 200).

Fourthly, it is true that on occasions, the British leaders like Robert Peel, J. Chamberlain and W. Churchill defected from their party. But such defection was motivated by lofty idealism and not by personal ambition and party integrity. But in India, defection has become a highly profitable business. Between March and April of 1969 as many as 550 legislators crossed the floor and as some of them did it on several occasions, the number of such defection finally reached to more than one thousand. Some of them even changed their loyalties from times within a month. So Dr. Kashyap has rightly observed that such “large-scale defection has often resulted in the ups and downs of the Cabinets” (p. 6).

Sixthly, while public involvement in the election in Britain has made it a popular democracy, India is, in this respect, lagging far behind. In Britain, 80-90 percent people cast their votes, because they know that voting is the basis of indirect democracy. But political system in India is pathetically otherwise. In 1984, the percentage of popular participation in election in India rose to 64, but normally it remains below 62 and in 1962, it came down to 55 percent. Moreover, this percentage is based upon huge number of false votes. “While British polls reflect honesty and purity of purpose, elections in India have become a costly furze. Capturing of booths, use of armed criminals and dacoits, manipulation in the voter-list, looting of ballot papers and so on have become essential parts of election” (Kapur, p. 425).

Seventhly, India has also failed to accept the idea of neutral speaker-ship which is an important aspect of British political tradition. “He is, as near as a human being can be, impartial” (Finer, p. 475). So, as soon as he takes the chair, he cuts off all relationships with his party and acts as the non-partisan chairman of the House of Commons. But, the speakers in India remain party-men and they often give their rulings in their political interests. So, Dr. Dash has rightly remarked, “We have not been able to reach the standard of aloofness prevailing in this matter in England” (Dash, p. 262).

Last, but not the least, the British political system does not, by any means, admit corruption or turpitude on the part of Ministers or Leaders. Strong public opinion has always condemned such affairs and, on occasions, Mr. Profumo and Mr. Parkinson have to resign from the Cabinet. But in India, a person with nearly a dozen criminal charges can be and remain in the Cabinet. Most strangely, even the people of the country do not bother much with such ugly affairs.

Party, Government and the People

In modern times, the party system is an essential part of political life. However, in the dictatorial system, a particular political party monopolizes all political power, because it is essentially a one-party rule (Neumann, p. 244).

But, in a democratic system like India and Britain, the government is formed by the people and it is keyed to public opinion. So, the political parties keep up a link between the government and the electorate. In fact, they keep the national life politically (Agarwal, p. 386). Democracy means the rule of the people and as they are guided by the political parties, political life veers around the party system. “It is the electorate who determines the form of Government and chooses who guide and dictate its affairs” (Garner, p. 495)

But in realistic considerations, people hardly become unanimous – there are conflicting ideas and interests. “It happens, as in the case of the slavery question in the United States or the Free-trade problem in England, that some paramount issues divide the community” (Leacock, p. 313). Different political parties mould the opinion of different groups and the elections are actually fought on the basis of such issues.

But ultimately, the bi-party system is far better than the multi party system in linking up the government and the people. In a multi party structure, people’s votes are divided among different political parties, and thus, often popular opinion is hardly reflected in the formation of the government. Often coalition governments come up without the popular intention. But in a bi-party system, the people choose either of the two parties and, hence, the election brings out a better coordination between the party and the Government.

From this analysis, it would perhaps be amply clear that at least in a democracy, political life is determined by the party system. Particularly, a bi-party system like that of England creates a close link between the people and the government.

The President’s Rule in the States and Union Territories, Lok Sabha Secretariat, Vol. 1,

A Comparison between British and Indian Political Party Systems. (2017, Feb 22). Retrieved from https://studymoose.com/a-comparison-between-british-and-indian-political-party-systems-essay 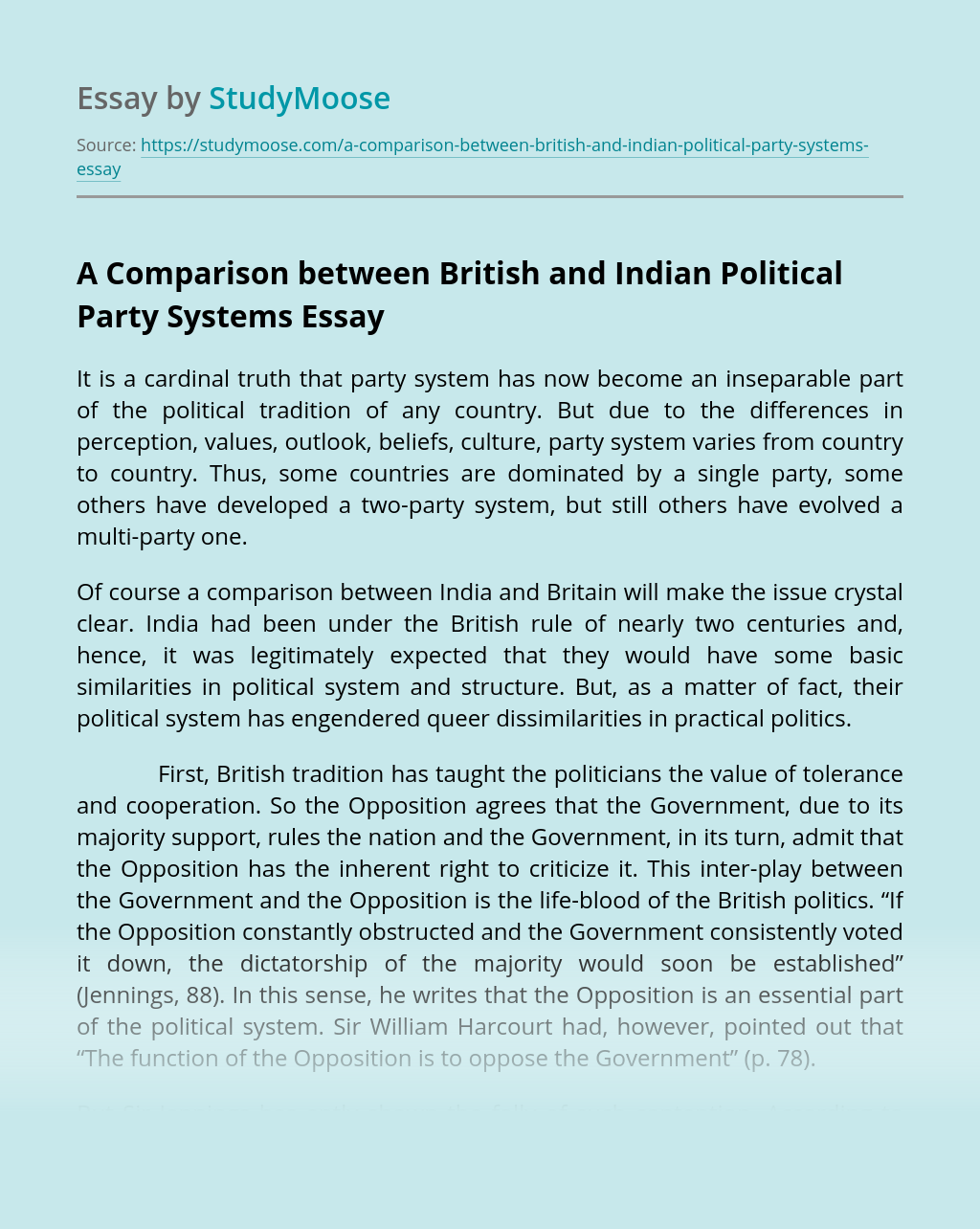