Differences Between Vietnam and British Food

When we talk about the differences between Vietnamese and English culture, we can think of many things, namely literature, style of music, arts, … One of these highlight culture is culinary. And I will tell you some differences of the two cuisines. Initially, both English and Vietnamese have 3 meals per day, but British food has traditionally been based on beef, lamb, pork, chicken and fish and generally served with potatoes and one other vegetable while people in Vietnam have rice, pork and vegetable as the main ingredients.

Turn in your highest-quality paper
Get a qualified writer to help you with
“ Differences Between Vietnam and British Food ”
Get high-quality paper
NEW! AI matching with writer

Secondly, the most common foods eaten in Britain include the sandwich, fish and chips, trifle and roasts dinners, opposite to pho, banh mi, xoi in Vietnam. For example, a typical English breakfast is more likely to be a bowl of cereals, a slice of toast, orange juice and a cup of coffee but in Vietnam, people usually eat pho, banh mi, xoi or instant noodles. Another differences is eating manner.

English people eat with a knife, fork or spoon (with the fork in the left hand and the knife in the right one) while Vietnamese usually use chopstick and spoon.

In the meal, the British usually use napkins and drink during meal meanwhile Vietnamese do not use napkins but wash their hands and their faces before and after every meal. They don’t drink during eating, they drink afterward.

In addition , in Viet Nam, rice is the main starch and meat is cut into small pieces before cooking because they never use knife during meal but in Britain potato or bread is the main starch and meat is cooked in big pieces, they cut it during eating Finally, before having meal, people in England normally pray for the God because of providing them with food, however, in Vietnam, everybody (especially young people) have to invite other members having meal.

There are so many differences in British and Vietnamese cuisine. The differences indicated above can show that the British culture is significantly different from the Vietnamese one. But in the trend of integration Viet Nam and Britain have more acculturation, especially cuisine. For example, there are so many places in Viet Nam selling British food such as sandwich, fish and chips and vice versa.

Differences Between Vietnam and British Food. (2016, Oct 03). Retrieved from https://studymoose.com/differences-between-vietnam-and-british-food-essay 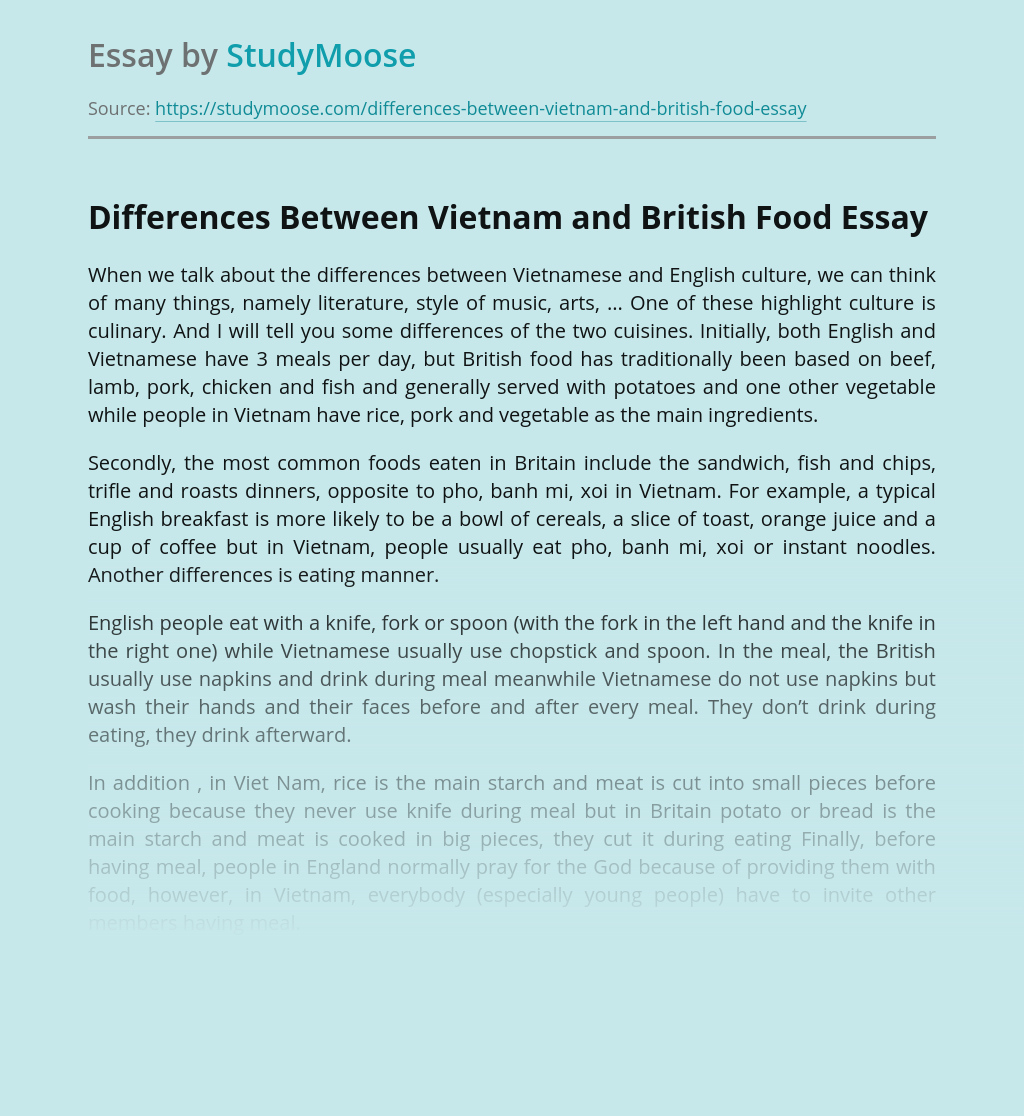 Turn in your highest-quality paper
Get a qualified writer to help you with
“ Differences Between Vietnam and British Food ”
Get high-quality paper
Helping students since 2015
Stay Safe, Stay Original