Theatrical features of the birthday party

The birthday party considered as one of the greatest Pinter’s work which reflect his own rules and features of his own drama. Perhaps Pinter is very different from other absurdist writers as the Irish Samuel Becket and Inesco.but in anyhow I can assume that the theatre of the absurd as called by Martin Essllin has witnessed some other themes and set of ideas that makes it relevant .This is partly as a results of Pinter’s style of writing ; he does not preach lecture or categorical statement , but instead present his audience with incident ,characters ,language that suggest that something of great significance is taking place ,without ever being specific about what is it .

Don't use plagiarized sources. Get your custom essay on
“ The Birthday Party Play Analysis ”
Get custom paper
NEW! smart matching with writer

So that the birthday party is an exploratory work that stimulate the audience into a wide range of topic , and perhaps the most vital thing to remember it is at one and the same time a play about the status of the artist in society , and how people fail to communicate, and about people need for security .

Language is a tool to articulate and express opinions, but in the birthday party people used language in other aims. we have the undesirability of communication characters do not want to talk with each other they use language as an escape from truth we do not know whether the word they said are true or false and that is related to lack of verification and unverifiability which is between truth and falsehood cannot be detected.

In the opening of the play we have a talkative woman that speaks a lot with her husband in an absurd manner communicating things with no real value. Pinter suggesting that people are too frightened of real communication to use language for this purpose, because real communication may reveal other weakness and deficiencies thus much language in the play is an attempt to cover up and evade the truth.

Goldberg’s memories of youth as an example used in order to remove from Goldberg the obligation or need to talk about what is happening now. So the whole theme in the birthday could be summed up by saying that in the birthday party people are shown as being either unable or unwilling to convey accurately their feeling and thoughts to other people. Also in this play we have a struggle or a paradoxical situation between individuality presented by Stanly that presented as an artist in society. in this interpretation in which Stanly represent the man with creative talent who defies the conventions of society by his mode of living as someone who refuses the traditional way of thinking and the values of society , and by refusing to accept it , and insist remains outside .therefore the character of Stanly considered as a menace to the system of society he may encourage other people to revolt against it.

If this could happen people doesn’t do what society demand from them it mean the collapse and a total distraction of society as a whole . therefore Stanly has to be drawn back in order to obey to the rules and being conformist by force if necessary .and the second part the two conformist man Goldberg and McCann whom considered as symbol that shattered the illusion of security of Stanly .that least one is an artist means freedom of artistic expression furthermore Stanly appears at end of the play in dark suit and white collar , shaven and unable to articulate or express himself this notions means Stanly start to fit in society . he has been made respectable, from this it is easy to argue that this is what society demands of its members an unthinking obedience and lack of any individuality . All Pinter’s play has the same scenario that have in the middle of it an unknown menace that come from the outside world.

The first play was the room wirriten in 1957 that contains that idea of outsiders force. In the Birthday party the room have also a great significance that made by Harold Pinter, it means the security for Stanly also as a womb of a mother , somewhere warm secure for its inhabitants . This significance of the room is related to the isolation of Stanly as an individual member. But this security is shattered by outsiders’ forces which considered as metaphysical that comes from outside the room and show that this security is unrealistic, a vain of hope. We can say that outsider menace is the result of being strange and not like the majority of society. Stanly as an example he isolate himself from others and that what considered as a threat to the government.

Finally we can assume that the play of the birthday party is an illustration of the state of modern man in the historical context after the second world war. I suggest that it main purpose is to describe the modern man who was influenced by the wars and violence he is lost and this feeling of lost is clearly shown in the play when Pinter used darkness in his play and this action made the reader and audience lost too. Obviously that theme of obscurity is also applied at level of communication and use of language when people fail to express their real emotion and opinion. There is an undesirability of communication people are frightened to tell other what they feel rather they keep silence and this use of pause by the writer is deliberately in a manner to show the audience that not everything we communicate is in purpose, but the truth is what isn’t as Pinter said : I think we communicate only too well in our silence, in what is unsaid. Also in this play we have the use of language as a weapon to distract and make other obey to other’s willing and that is a part of the menace which comes from the outside of the secure room. 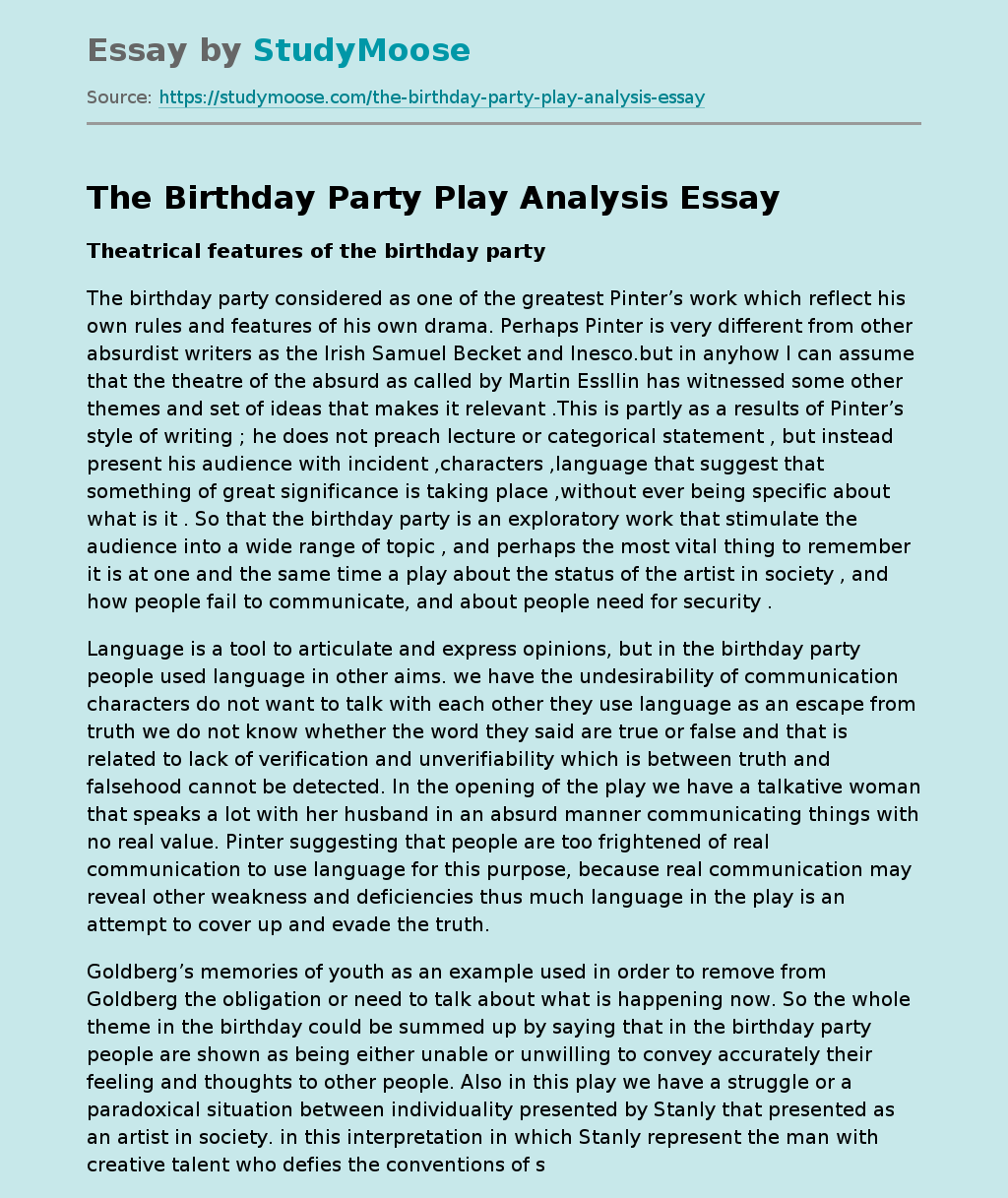