The text under analysis is named The Dinner Party, written by Nicholas Monsarrat. Monsarrat is a British novelist known for his sea stories and his novels, The Tribe That Lost Its Head and its sequel, Richer Than All His Tribe. The Dinner Party is a piece of narration. It tells us about a rich man (uncle Octavian), who was a hospitable and friendly man, and liked to give parties – until January 3, 1925. It was his fifty-fifth birthday. As usually on such a day he was giving a party, a party for twelve people.

Don't use plagiarized sources. Get your custom essay on
“ Analysis of Dinner Party ”
Get custom paper
NEW! smart matching with writer

All of them were old friends. During the party he was admired a magnificent diamond ring on the princess’s hand. Then the ring was passed from hand to hand, and so it was lost or stolen although all the guests were close friends. Nobody returned the princess’s ring back, so it was never found and it never appeared. Since that event Uncle Octavian never gave a single lunch or dinner party for the last thirty years of his life.

He died a comparatively poor man with the special sadness of a hospitable host. The purpose of the author is to show how it’s significant to have values, principles and it doesn’t make a difference if you are poor or rich. Uncle Octavian believed in his friends and suffered from this at the end as one person, one of his close friends is appeared to be a thief. Uncle Octavian lost all his friends and was never able to believe anyone from that day.

The story is well-structured, so it may be divided into the following parts: exposition, complication, conflict, climax and denouement. The first part begins with “There are still some rich people …” and ends with “…until January 3, 1925.“ It tells us about rich people in their princess world and claims that even those have their problems. In this part we meet with the author, unnamed, and the main character (my uncle Octavian), who is described as a charming, hospitable and most amiable man with the help of epithets.

The second part begins with the words “Let me tell you a story …” and ends with “all old and intimate friends of my uncle Octavian.” This passage describes the author’s feelings about staying at such event – the 55th birthday of his uncle, and the party itself. Here we observe a description of uncle’s friends and to stress how rich and important the friends of Octavian were the author uses metaphor “old flames”, and epithets such as “respective husbands”, “exceptional intelligence and his fabulous American wife”. The next part begins with “Towards the end of a wonderful dinner …” and finishes with “…saw her pass it on.” Here we become acquainted with a princess and her magnificent ring, loved by everyone at the table. The ring itself is described very vividly to stress its importance for example here the author uses an allusion to Genghis Khan. The climax of the story is the moment when everyone understands that the ring is lost or stolen.

Here the author describes dreadful embarrassment of Uncle Octavian’s cherished friends and uncle’s belief in good of his close friends. Colorful epithets are used to show growing anxiety among the guests: dreadful, fruitless. In the epilogue we see that the ring was not never found and Octavian died poor man, never throwing a single party again as he lost his trust in people. Monsarrat uses antithesis to express how uncle’s life has changed since his 55th birthday: at the beginning he writes that he was “a happy rich man”, at the end “comparatively poor”. Poor here is also a metaphor used not only to describe his financial status, but also to show his inner feelings after that date – he lost his trust, his beliefs were deceived. The tone of the story is grammatical and ironical at the same time, as the theme is judging people of being such liars even among friends – the theme itself is quite ironical. 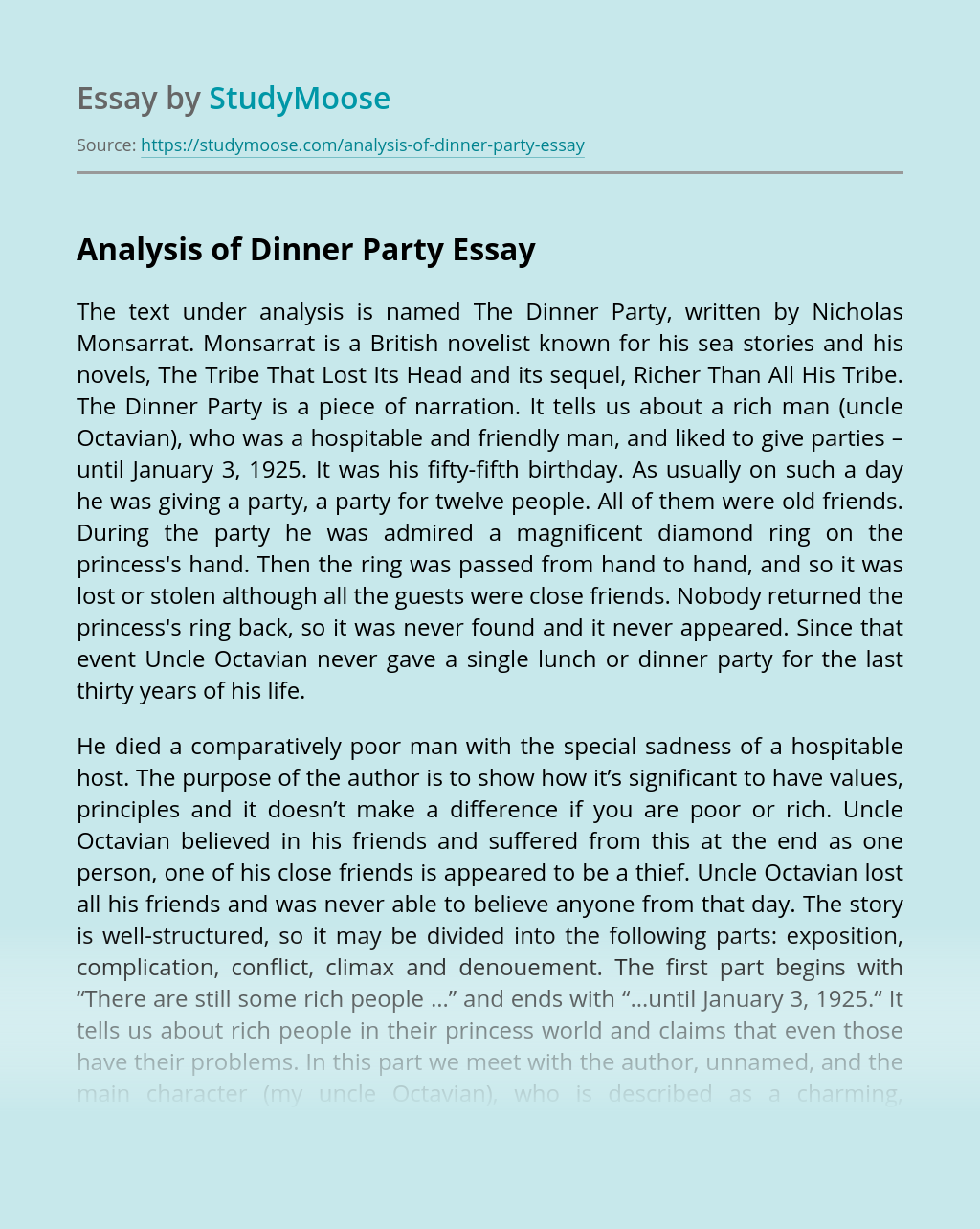