Analyse "Giving a Little Dinner Party" from a gender perspective

The text “Giving a little dinner party” represents gender in a very specific way. The female gender is represented as submissive, and the male gender is represented as dominant, as is common within a patriarchal society, which is typically male dominated. This text is written by a woman, which is surprising as the general register of the text is commanding and bossy, which does not relate to the message which she is trying to give about gender in her instructions on how to give a dinner party.

Don't use plagiarized sources. Get your custom essay on
“ Analyse “Giving a Little Dinner Party” from a gender perspective ”
Get custom paper
NEW! smart matching with writer

The first feature which really stands out in the text is the use of the adjective “little” in the title and throughout the text. The lexeme itself is diminutive, and it is also an empty adjective. This implies already that the dinner party is an easy to manage, fun event to host. However it is patronising, and as it is placed at the beginning of the article, it makes the reader feel patronised early on into the article.

Empty adjectives and adverbs are prevalent throughout the article. The writer uses lexemes such as “perfectly”, “nicely”, and “little”, which don’t have any specific meaning which is relevant to the subject. Lakoff states that women typically use empty adjectives to enforce what she is saying, as she needs to feel that her words have significance in the conversation. This is a sign of status anxiety, which shows the woman as being very conscious of her status in the world. This reinforces the theme that women are inferior in this article.

More diminutive forms are used in the article, such as the marked term “hostess”, which makes it clear to the reader that the meaning of that word is definitely female, as opposed to “host” which would be specifically male. By adding the suffix “-ess” to the end of the noun “host”, it is implying that the original form of the word is the purest and the more ‘correct’ term. In the fourth paragraph, the two terms are placed next to each other, however the word “Host” comes before the word “Hostess”, as this is seen as the natural order to put the words in, which implies yet again that the male is the superior, and therefore his name deserves to come first.

The writer states “The host (…) leads the way to the dining-room with his partner, and the hostess comes last, with hers.” This phrase implies that there is an order of precedence within the dinner party, as the male is seen as being the most important and therefore having the right to leave before the hostess. This is enforced by the phrases “…seat the most important lady” and “the second in importance at her right.” This would be outdated in modern times, however at the time that this article was written it was obvious that people would sit according to their importance, which would perhaps be judged by wealth.

The adjective “chief” when used within the adjective – noun phrase “chief man” has strong connotations of the man being a leader and of him having power over the rest of the guests at the party at that time. It also goes on to state “sits at his hostess’s left hand”. The possessive determiner “his” is used to state that the hostess is owned by him, which reduces her to a possession which is under ownership of her husband. This implies very strongly that the man should have power over the woman.

The noun “maid” connotes that the target audience of this recipe would have been wealthy, and it would be assumed that you would have a maid to participate in events such as throwing a dinner party. It is also exclusively female, which connotes that it should be female servants who serve the more important male counterparts who are eating at the dinner party. The noun “housewife” is a term used to connote a woman who stays at home, cooking and cleaning and throwing dinner parties. This is a traditional role which would fit into a patriarchal household and society, where the man has the responsibility of working and earning money to support his wife and children at home.

The text states that “carving is done by the host”. This is a primitive statement, which implies that carving is a dangerous job, and that it should be done by the man who is of superior physical strength. “Carving” is a verb which has connotations of cutting into a large animal. However, it also states that “Soup and sweets are done by the hostess”. This implies that soup and sweets require smaller ‘manpower’ and that they would be easier to inevitably serve at the meal, as they do not involve cutting meat with knives or other sharp objects which could pose a threat. “Sweets” are not a main part of the meal; they serve as a sort of aftertaste to the main part of the meal which was the meat, which had been carved by the male. This implies that women are not important enough to deal with the main part of the meal properly.

Alliteration has been used in the text to create a more leisurely feel to it. Phrases such as “menu according to your means” and “capabilities of the cook” are used, which help in creating a sing song register to the article. This is patronising to the reader and it also makes it feel like the task that they are partaking isn’t very important.

Imperatives are used in this text, which reinforces the author’s authority over the reader, and emphasises the point which she is making to make sure that whoever is following this does so correctly. The imperative “arrange” is used at the beginning of a sentence, which makes it seem instructional and almost as though it is the most important part. The imperative “seat” is used in the sentence “sea the most important lady”, which also adds to the author’s instructional register and makes the reader almost feel patronised, again. This is surprising that the author is so authoritative, when she is making it clear in the text that women are the ones who are supposed to follow orders. However the target audience of this text would have been women, so it still keeps the woman’s position in society the same.

The noun “cook” is used on the presumption that we assume that the cook is a woman. “…capabilities of the cook, whoever she be” The use of the pronoun “she” makes it clear that the author assumes that the person doing the cooking at the party would be a woman. The term cook is not a professional term, and therefore it makes it seem more home-friendly. This ties in yet again with the patriarchal society, with the woman staying at home cooking and cleaning. 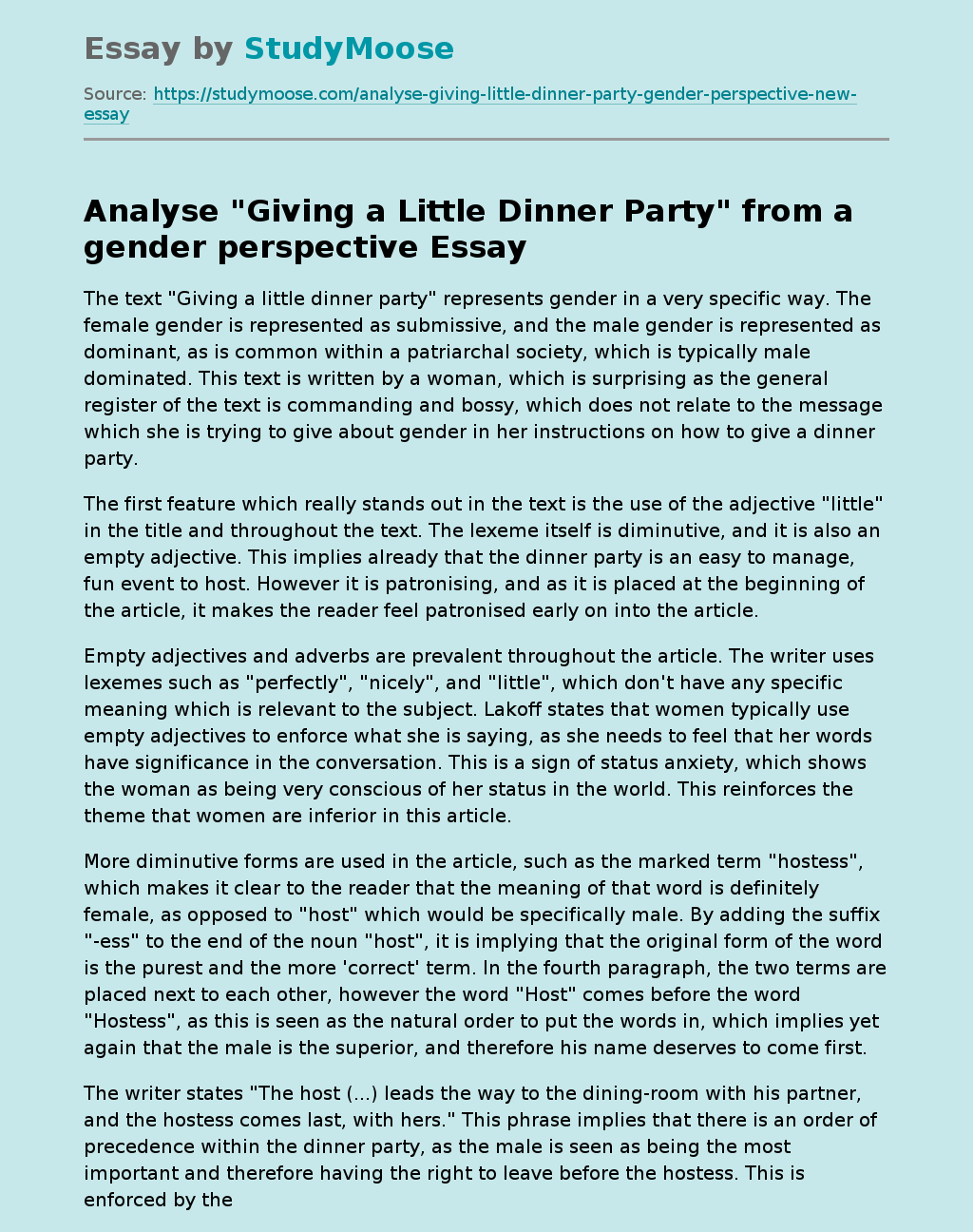