Family can mean many things. However, typically when someone say family it is often taken for granted to mean a married couple with children. This stereotypical view does not consider a changing society with changing norms and values. It is important when discussing the family, it should define in a wider perspective. I was not grouped into what people called the “perfect family”. My mother was a single parent raising 4 kids, and most of our childhood she was active in the Navy at the time.

Don't use plagiarized sources. Get your custom essay on
“ Personal Narrative: My Experience with Gender Roles ”
Get custom paper
NEW! smart matching with writer

Me and my siblings lived with my grandmother while my mother was away. I can tell that it was hard for everybody to adjust this lifestyle, but it helped me shape me into the person I am today. My respect for single parents is tremendous. I admire the strength and courage to take on a 2-parent job. (TCO 7).

Growing up I never like labeling myself into a social class because I feel like people would judge me based on it.

I do not come from a rich family nor is my family poor. However, my family did have to struggle sometimes because my mother was single parent raising 4 kids on her own with help from my grandmother. They both made sure me and my siblings had everything we need. College was a turning point because I am the youngest and the last to go to school. With my mother being a single parent, she didn’t have much help money-wise to help put all her kids through school.

So, by the time it was my turn to go to college she had already taken loans to help my other siblings get through school. So not only did I have to take out student loans, I had to increase them as well because there was a little issue with the state of Illinois not approving a budget for the school. (TCO 5).

In many ways race is about difference and how those differences are codified through language, categories, boxes, segmentation, and even the implicit sorting that goes on in our heads in terms of the way we label others and even ourselves. I think it’s important to acknowledge who you are and everything that makes you that. The race has become a big problem today due to the recent changes. Me being black has not been a problem until these changes occurred. I am looked at more differently than I normally am. When I go in store, they ask me to check my bag. However, I notice that the people behind and in front of me don’t get asked the same. In addition, on public transportation people tend to avoid seating next time, and even when it’s coward it they prefer to stand up. I have come to an understanding no matter what my race is going bring a kind of discomfort towards people. All I can do is be proud of who I am. (TCO 5).

Gender has not been a big problem in my life. I would say my family has become more open with gender equality due to the recent change of my older brother. Over the past couple of years my older brother decided to become transgender. I was excited that he finally came to term of being who he is because being trans means that, while people may have told you that you were crazy, that this would alienate you from your family, or that you would get yourself killed, you knew yourself, and chose to live as yourself. At first, I could tell some of my family member was a little confused and uneasiness about his decision especially my second older brother because he is Christian and more by the book. It took some time for them to come around, but I can see that they are starting to become more accept of who we are. (TCO 4 &6).

I recently just come to terms with my own sexuality, I am bisexual. I had always identified as straight; I hadn’t really considered any other possibilities. However, my freshman year in college I met this girl in my dorm hall and we became friends. Once day she made it very clear she was interested in me. I had never considered the idea, but when she kisses me it was very clear that we both knew where it was going. My whole freshman year and a little bit of sophomore we had dated. This was my first same-sex relationship, so I can’t generalize too much, but it’s really refreshing to not have such strict gender roles. I’ve always been independent, and a lot of men found that intimidating that I really didn’t need them for much. I feel much less restricted; I don’t feel forced to be so girly anymore. When I told My family that I was bisexual, they were very accepted with me being who I am. I think the reason was that my brother is transgender, and it forced them to be more open and accepted who we are. (TCO 4 &6).

Sex roles is still an issue today. Assumptions about what is right or appropriate for girls and boys has an influence well beyond Women and men are not automatically compared; rather, gender are analyzed to see how different social groups define them, and how they construct and maintain them in everyday life and in major social institutions, such as the family and the economy. Lucky for me my family did not treat us differently just because we are a certain sex. Whether you were a boy or girl, we all had the same chores to do and were given the same treatment and respect. However, when I got older things started to change. I am an independent woman who like to do things herself and work for what she wants. A previous boyfriend of mine didn’t appreciate the fact that I like to be independent. He didn’t understand why I didn’t want to stay home and do work around the house while he went out to work. I told me a women’s job is to stay at home while he goes out and make the money. That was a turning point in my life. After I broke up with him I realize some men are going to feel frightened by how I like to do things on my own and there’s no changing it. . (TCO 4 &6). 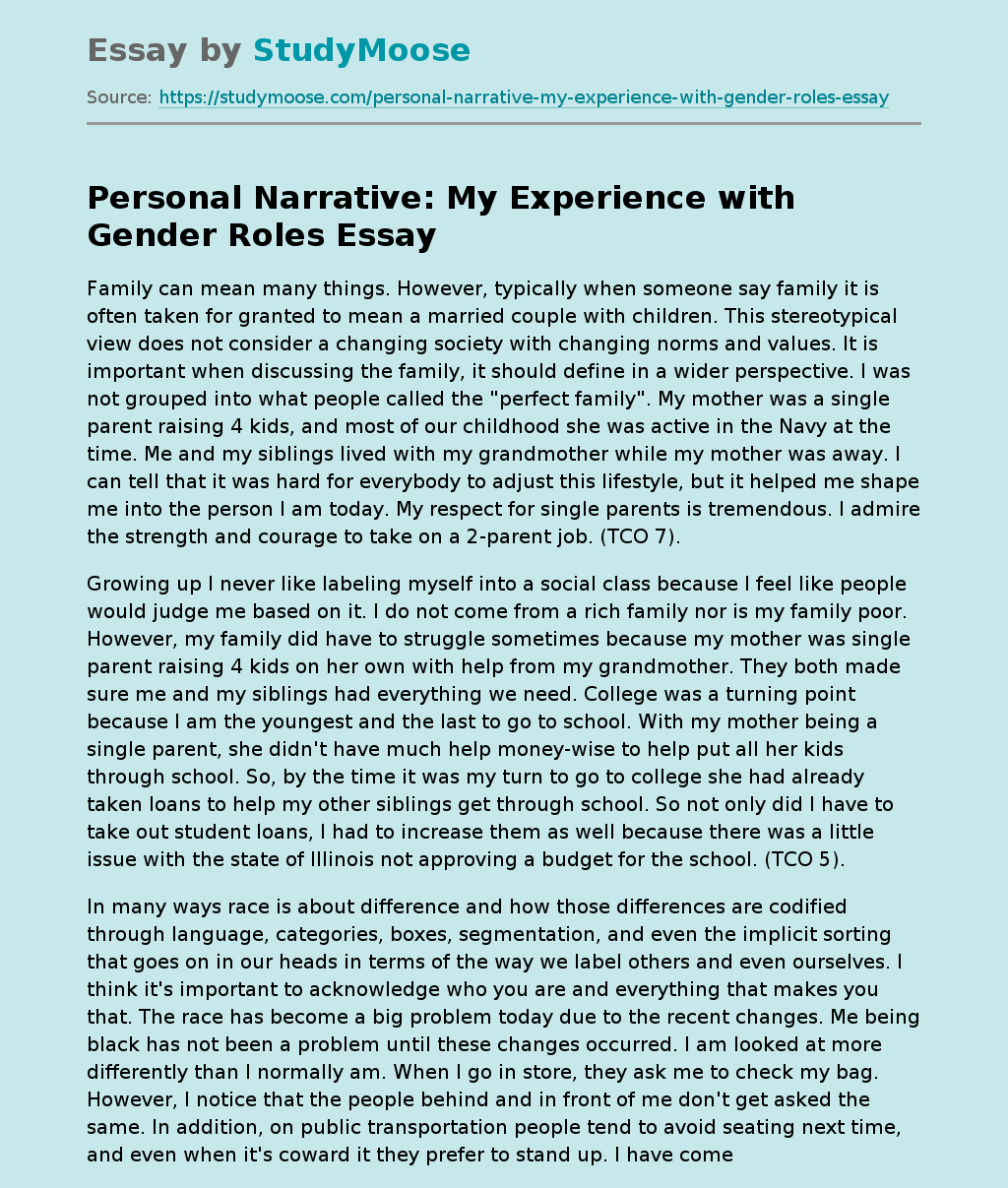