William Shakespeare’s tragedy Macbeth is a prime example of a play that challenges the idea of traditional gender roles in society. While women were treated as inferior, lesser beings compared to men, Shakespeare still manages to portray them as fearless and highly influential characters. The orthodox perspective of women was that they looked after the children, they were weak and unworthy, and they did housework every day. On the other hand, males were the warriors and breadwinners of the family.

Don't use plagiarized sources. Get your custom essay on
“ Challenged Gender Roles in Shakespeare´s Macbeth ”
Get custom paper
NEW! smart matching with writer

Their strength was more often conveyed through battles or horrific times where sacrifices needed to be made. Robert Kimbrough writes, “… to be “manly” is to be aggressive, daring, bold, resolute, and strong, especially in the fact of death” (Kimbrough 3). However, in this play, Lady Macbeth is conveyed to have strong masculine characteristics, defying the stereotypical gender roles. Heather McPherson writes in her article, “… she plays a Seminole role in the dramatic action and functions as a catalyst and a psychological foil for Macbeth”, which perfectly summarizes Lady Macbeth’s position in the play (McPherson 5).

Through an analysis of the interactions between and roles of Lady Macbeth and Macbeth, it is clear that Shakespeare used Macbeth to create a progressive transition out of traditional gender roles and norms. Lady Macbeth’s iconic dialogue occurs in Act 1, Scene 5 in which she receives word of King Duncan’s arrival to their home later that night and is driving Macbeth to murder Duncan for the title of King of Scotland. Specifically, she says, “Come, you spirits That tend on mortal thoughts, unsex me here, And fill me from the crown to the toe top-full Of direst cruelty.

” (Macbeth 1.5.31-34). Here, she invokes the savage spirits in an avid rejection of the symbols of traditional womanhood— mercy, kindness, and breasts in an attempt to be consumed with a masculine mindset and resolve. That is, with murderous determination, goal-oriented, and a ruthless mentality. Lady Macbeth paints images of death and maternal purging, creating a troubling vision of female power. Traditional gender roles have been disrupted as Lady Macbeth blatantly usurps the superior role in her marriage with Macbeth; she essentially rules over him and dictates his actions and feelings.

The language also plays an important role in this scene. The word unsex contains the prefix –un which may imply that the speaker, Lady Macbeth in this case, is attempting to constantly undo what has been done or prevent impending events from happening. Perhaps Lady Macbeth is wishing she was born as a male so she could take the lead to power, status, and victory in battle. However, this connotation cannot cancel inner conscious conflicts, which may take the form in hallucinations or nightmares. This idea parallels to the future scene where Lady Macbeth seemingly passes away from suicide, or perpetual guilt. From the beginning acts, the Macbeths do not conform to the conventional ideas of a husband and wife. Catherine Thomas writes in her article for Clemson University, “…Lady Macbeth’s portrayal begins with the powerful elements of her ambitious and successful plotting of Duncan’s demise…” which supports how Lady Macbeth’s introduction was done with an air of confidence, power, and dominance over Macbeth’s (Thomas, 1).

Although Macbeth was hailed as a hero and given the title Thane of Cawdor, Lady Macbeth distinguishes herself as the more authoritative force in their relationship. For example, at the part where King Duncan announces that he will visit Macbeth’s home, Macbeth is clearly nervous and hesitant of how to conduct himself. At that moment, Lady Macbeth seizes control of the situation, especially when she asserts, “Let me handle tonight’s preparations, because tonight will change every night and day for the rest of our lives.” (Macbeth, 1.5.57-60). Usually, the male or husband would be more assertive and commanding in a relationship instead of the female or wife, but here the gender roles are reversed. She “has crossed the boundaries of appropriate behavior for a wife and subject” in order to achieve her goals of power and fame (Thomas, 1). Furthermore, Lady Macbeth and Macbeth differ in the amount of ambition and drive they have. Although both crave for power and status, it is Lady Macbeth who initiates the first steps toward achieving it. After hearing of the Witches’ prophecy, her thoughts and actions solely pertain to killing King Duncan for the title at whatever cost, and not getting caught in the process. Macbeth’s reaction is more lackluster with a sense of helplessness; similar to how a woman might react in a dire situation. He says, “My thought, whose murder yet is but fantastical, Shakes so my single state of man That function is smothered in surmise, And nothing is but what is not”, proving this (Macbeth 1.3. 143-145).

In contrast, Lady Macbeth quickly takes charge of the situation, creates a murder plan, and takes into account logistics Macbeth most likely would not have even thought of. For example, she explains to Macbeth, “You should project a peaceful mood, because if you look troubled, you will arouse suspicion. Leave all the rest to me.” (Macbeth 1.5. 63-65) in order to not raise any red flags. While Macbeth longs to be King of Scotland, there is no one else who craves for power more than Lady Macbeth. Moreover, Lady Macbeth and Macbeth also differ in terms of their emotions. At the mere thought of murdering King Duncan, Macbeth was skeptical and reluctant while Lady Macbeth remained unaffected. Even after King Duncan’s murder, she remains unfazed, as shown by the way she handles Macbeth’s haphazard behavior after he forgets to leave the daggers at the scene of the murder: “Infirm of purpose! Give me the daggers. The sleeping and the dead Are but as pictures. ‘Tis the eye of childhood That fears a painted devil.” (Macbeth 2.2. 53-55). Here, Lady Macbeth is completely calm, and as previously mentioned, she takes into account logistics (e.g. daggers) that Macbeth did not even think of. Conversely, Macbeth is in shambles emotionally so much that he refuses to re-enter the room. He says, “I’ll go no more: I am afraid to think what I have done; Look on ’t again I dare not.” revealing just how mentally disturbed he is by what he and Lady Macbeth have done. McPherson also writes, “… Lady Macbeth became the dominant agent, it was not a sign of her greater depravity but rather an indication of her moral superiority.” (McPherson 304).

Lady Macbeth had overwhelming determination, a strong will and nerve, and powerful intellect which made her character as fearsome as her deeds. In general, women tend to be more emotional and project their emotions, while men are more known to be more quiet and reserved. Although this is not necessarily true today, in Shakespeare’s time it was rare for the man to be more emotional. In this sense, Shakespeare makes Lady Macbeth’s masculinity clear to reverse her and Macbeth’s gender roles. In the same way, Macbeth let’s his emotion get the best of him most notably when talking about King Duncan. He is disturbed by the murder and is completely troubled even before completing the act. He states, “… First, as I am his kinsman and his subject, Strong both against the deed; then, as his host, Who should against his murderer shut the door, Not bear the knife myself.”, showing how unwilling he is to take advantage of and betray King Duncan by killing him. As such, Shakespeare further challenges typical gender norms because a man would normally not have any emotional setbacks for power. Macbeth’s gender roles are the opposite of typical gender stereotypes that society functions on in almost every way. Lady Macbeth and Macbeth’s personalities are the inverse of each other in terms of social standards and expectations.

However, as the play continues, the roles reverse as Lady Macbeths loses or superior edge and begins to take on the more submissive role and characteristics, while Macbeth takes her place as the more assertive and authoritative person. As the play continues, Lady Macbeth becomes more unhinged and her grip on Macbeth starts to loosen. She no longer needs to persuade him to murder or take action as he starts taking initiatve; taking on typical male characteristics. Whenever Macbeth realizes someone might stand in his way to maintain his position, he immediately develops a plan for their death. Mohammad Jashin Uddin states in his journal, “Macbeth’s first attempt is to kill Banquo and his son Fleance because a feeling of insecurity has arisen in his mind as Banquo’s descendants will also be kings.” (Uddin, 70). He shows no compassion or empathy for Banquo as a friend when he considers and arranges for their murder, as seen specifically when he says, “There’s comfort yet; they are assailable. Then be thou jocund. Ere the bat hath flown His cloistered flight, ere to black Hecate’s summons The shard-borne beetle with his drowsy hums Hath rung night’s yawning peal, there shall be done A deed of dreadful note.” (Macbeth 3.2.40-45). As the play progresses, the Macbeth’s slowly start to mimic each other’s behavior.

In the beginning, Lady Macbeth manipulates Macbeth for their own benefit by challenging his manhood in order to murder King Duncan. She continues to exploit Macbeth until he becomes king and Macbeth uses the same strategy against her. While Macbeth was more opposed to murdering King Duncan, he transforms into a person ready to kill at any moment after he takes the throne. Lady Macbeth even pleas with him, saying “You must leave this.” when discussing how to act in front of the guests (Macbeth, 3.2.37). This completely contradicts her previous requests for him to take action. As the play begins to reach the end, Lady Macbeth becomes mentally plagues with guilt.

In contrast, Macbeth progressively becomes more emotionless, only taking pride in the people he kills to maintain the throne, especially Macduff’s wife and children. Macbeth’s lack of guilt parallels Lady Macbeth’s attitude at the beginning of the play, before murdering King Duncan; the gender roles that initially took place reversed by the end. In conclusion, Shakespeare creates a plot that internally challenges traditional gender standards through the interactions between Lady Macbeth and Macbeth as well as their behavior. They act the reverse of what is usually expected in the beginning and show the dominance the other gender possesses throughout. Lady Macbeth blatantly breaks female standards and expectations with her masculine attitude and characteristics while Macbeth has more feminine traits. Overall, Shakespeare does not fail to show how Lady Macbeth and Macbeth transition into their regular gender roles and how it only leads to their downfall. 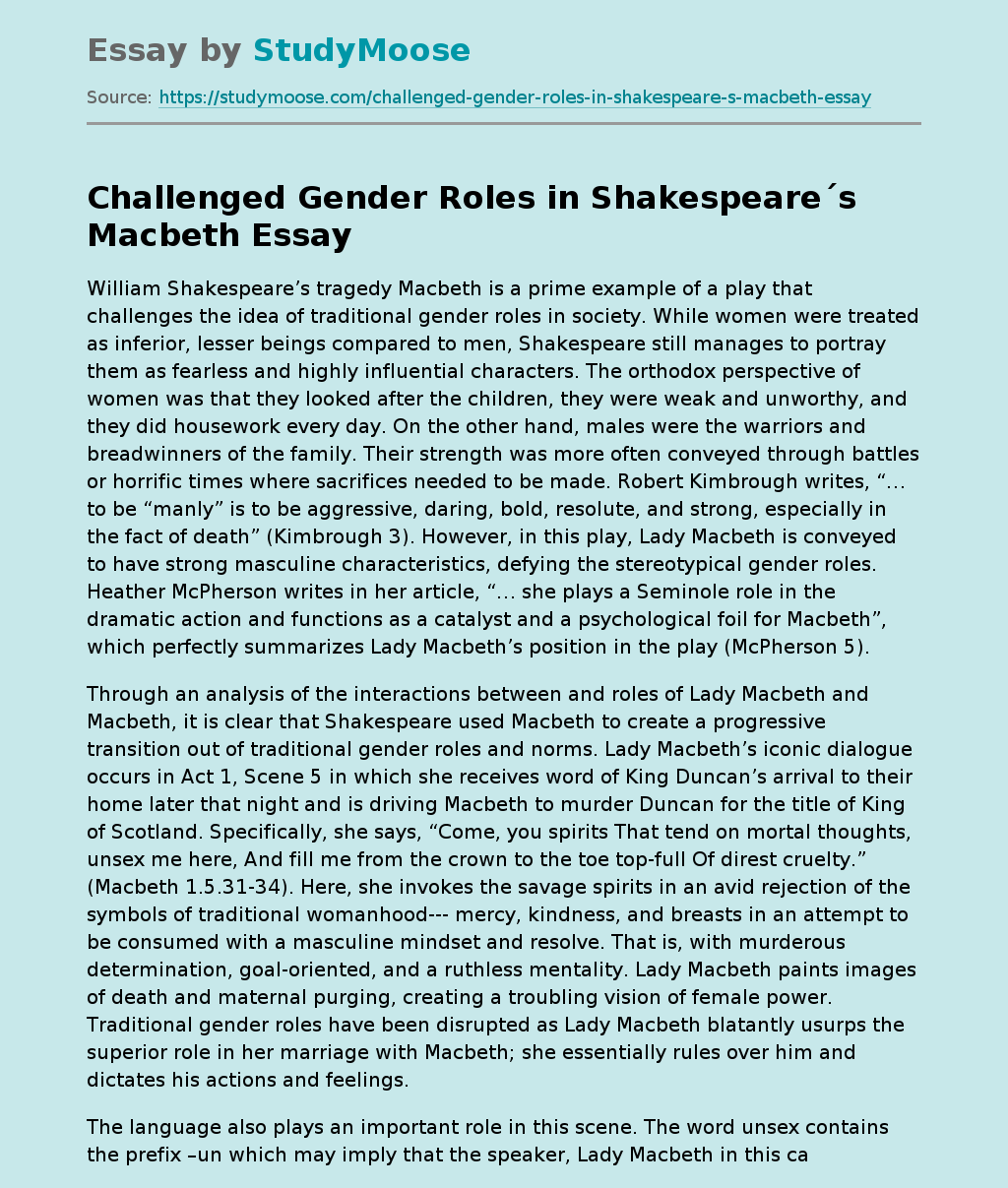