Gender Roles In The importance of Being Earnest Essay

In The Importance of Being Earnest, the question of each gender’s role in society often centers on power. In the Victorian world men had greater influence than women. Men made the decisions for their families, while women worked around the house. Wilde raises interesting questions about gender roles in The Importance of Being Earnest, by putting women (like Lady Bracknell) in positions of power and by showing that men can be irresponsible and bad at Decision-making The traditional view of gender relations in the Victorian era was that men were active, manly, assertive and economically independent whilst women were assumed to be passive, pliant and dependent.

Don't use plagiarized sources.
Get Your Custom Essay on Gender Roles In The importance of Being Earnest Just from $13,9/Page

I believe that Oscar Wilde does challenge these traditional roles deliberately to make humor out of these characteristics and to make fun of the conventional roles of society. The two main male characters, Jack and Algernon, cannot really be regarded as masculine, or at any rate both of them do not fit the criteria for what characteristics a stereotypical Victorian man would be they are both what people at that time would call ‘dandy’s’.

Algy and jacks un gentlemanly behavior and trivial pursuits can be seen as comic and deliberate in making men seem less powerful and serious. Algy is also a little too concerned with clothing to come across as masculine. This can be seen when he criticizes Jack by saying that he had ‘never known anyone to put so much effort into dressing and to produce so little effect’. Algernon also says in Act two when talking to Cecily that he wouldn’t trust Jack to buy his outfits as he has ‘”no taste in neckties”. Algy is dandy, making him unmasculine and a bit of a joke in the eyes of the Victorian audience.    A time in the play when we see women as having more power then men is in the character lady Bracknel, she is strong and blunt even coming across as a bit intimidating we get the feel that even Algy is afraid of her as he would rather make up a fake man then tell her that “ he cannot have the pleasure of dinning” with her.

Another strong female character we see is Gwendolyn. She is feminine in some aspects like how se wanted the proper engagement (she makes jack proposes formally), but at the same time she can be seen as more masculine then Jack especially because she is quite assertive. Gwendolyn is also breaking stereotypes as when her mother tells her to wait in the carriage but she defies her, were as most girls at this time would not even dare to disobey there mothers. A good example of Gwendolyn being assertive is when Jack is made to propose to her properly. Even though Gwendolyn knows exactly what he is going to ask her and she even tells him that she is going to accept him before he proposes, Gwendolyn insists on a proper proposal, which is absurd.   Gwendolyn is clearly going to be more and more like her mother as she matures we see Algy mention this when he says that a girl’s worst flaw is that “they will end up just like their mothers”.

Her mother, Lady Bracknell, is probably the most masculine character in the play. She is very pompous and the most assertive of all the characters. She has the power to stop Jack from marrying Gwendolen and has the ability to boss the male characters of the play around. Lady Bracknell’s masculinity is funny because it is almost absurd. She is seen as lacking some more feminine characteristics like sympathy for example she has no sympathy for Bunbury who she claims “should just make up his mind whether he is going to live or die” .She gives Jack no condolences when he says that he had “lost” both his parents, instead she says that he was careless, and when he explains that he was found she appears to be outraged and shocked giving us the impression that she has control over the situation.

Gender Roles In The importance of Being Earnest. (2016, May 12). Retrieved from https://studymoose.com/gender-roles-in-the-importance-of-being-earnest-essay 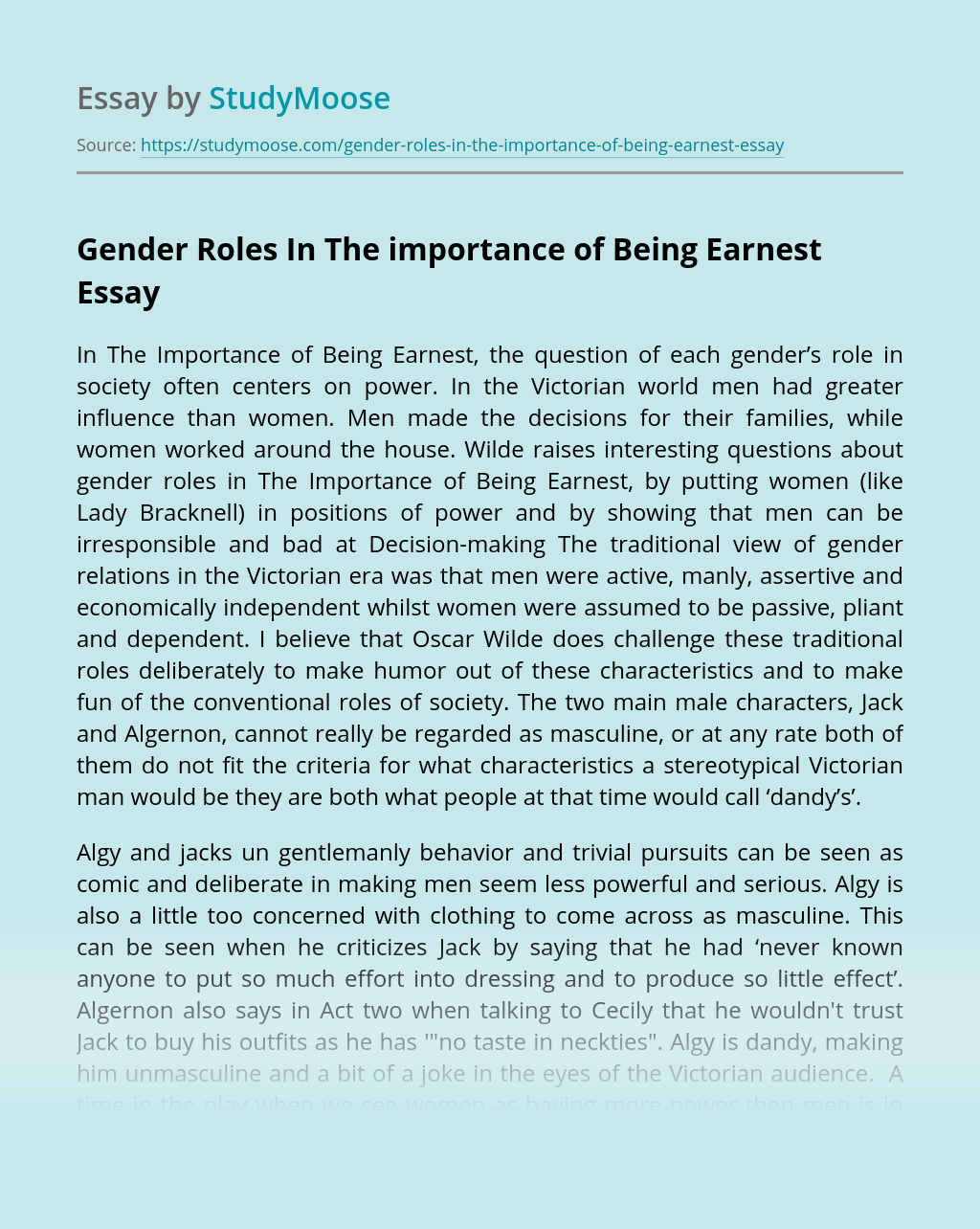 A Realistic View Of Life

Liberalism is a political ideology portrayed as the ideology of the industrialized West. Although liberals of all time never waver in their faith in protecting the “liberty” of individuals, the meaning of the word keeps changing over time. The main purpose of this essay is to examine the differences of classical liberalism and modern liberalism.... VIEW ESSAY

How are the health care workforce and health care delivery affected by generational differences? Millions of generations have worked so hard to contribute to some of the challenges within the workforce. Every generation has inner deep values formulated by the era in which they were born and some life experiences. The work ethics, perceptions of... VIEW ESSAY

By The Name Allah the Most Merciful and Almighty Executive Summary Of Research on Basant or Spring Festival Event for the research was decided as “Basant or Spring Festival Lahore”. Basant was started 1300-1400 hundred century. But in near past the event was become controversial. Some religious activist called it Hinduism while some people in... VIEW ESSAY