Gender Roles in "Their Eyes Were Watching God"

During the 1900’s, women, specifically black women, were considered to be property of men in the United States, especially down south, in states such as Florida and Georgia. Legally, women had no voice. For example, if a woman was abused by her husband, the court system would not acknowledge it even if it did really happen. In the article “Sexism in the Early 1900’s”, Becca Woltemath states that “…a woman’s job is to take care of the house and to bear children.

Don't use plagiarized sources. Get your custom essay on
“ Gender Roles in “Their Eyes Were Watching God” ”
Get custom paper
NEW! smart matching with writer

She’s no good for anything else. She’s just a simple thinker.” Women were forced into submission and there was nothing they could do about it. In the novel Their Eyes Were Watching God, Zora Neale Hurston shows the issue of gender roles through the story of a young woman named Janie, who struggles through an arranged marriage. Through multiple characters, as well as the plot, sexism comes to the surface.

As soon as the novel begins, it is evident the roles of men and women play a very big part in this novel: “Ships at a distance have every man’s wish on board.

For some they come in with the tide. For others they sail forever…Now, women forget all those things they don’t want to remember, and remember everything they don’t want to forget” (Hurston 1). In this opening paragraph of Their Eyes Were Watching God, Hurston compares the wishes and dreams of men and women in a particularly interesting way.

By using the sea as a symbol, she is saying that men can never really control their dreams, just wait for them to come true.

While women on the other hand, can take their dreams into their own hands, molding them as they see fit. Making this comparison establishes the theme of gender difference throughout the novel, and ultimately foreshadows the fact that Janie is going to struggle, yet will stop at nothing to achieve what she sets her mind to.

After first setting the tone, Nanny is introduced. Her traditional values of womanly roles such as cooking and cleaning lead us to believe that Janie will be the same way. But when Janie kisses Johnny Taylor, her view of men changes after seeing “a dust-bearing bee sink into the sanctum of a bloom; the thousand sister-calyxes arch to meet the love embrace and the ecstatic shiver of the tree from root to tiniest branch creaming in every blossom and frothing with delight. So this was a marriage! She had been summoned to behold a revelation” (Hurston 11).

This paragraph is one of the most important, if not the most, in the whole book. Comparing love to the relationship between a bee and its flower, Janie suddenly craves, love, passion, and above all, someone she can consider her equal. Unfortunately, though, equality was a foreign concept during this time period. Men were seen as “all-powerful”, considered the sole providers and the only ones allowed to hold any sort of office or high-status job.

In Janie’s first relationship, it is clear this is not the equality she has hoped for. Logan Killicks- an elderly, black man her grandmother has arranged for her to marry- treats Janie like a servant and not like a wife at all. There is no love present, and every day is a chore.

Even though Nanny knows Janie is not happy, she insists the marriage is a good one: “’Heah yo is wid de onliest organ in town, amonst colored folks, in yo’ parlow. Got a house bought and paid for and sixty acres uh land right on de big road…Lawd have mussy! Dat’s de very prong all us black women gits hung on’” (Hurston 23).

In Nanny’s speech, Hurston is trying to emphasize that the female’s only role is to marry and look good, and let the man do all the work. Also in her article, Hartman says that “…due to the fact that the man was almost always working, little room was left to develop a connection between husband and wife; love was a foreign concept.”, which describes what Janie and Logan have together exactly. Despite being given all she should want, Janie seeks more.

When Joe “Jody” Starks appears out of nowhere, Janie feels like her dreams have finally come true. But after a while, the marriage turns out to be little more than the stint with Killicks. Starks, like Killicks, treats her as property and not as someone he actually loves. One example is how Jody makes Janie put her hair up in a wrap while working in the store, rather than leave it down.

Another is when he publicly criticizes her appearance, saying she is starting to show her age, when he is clearly at least ten years older: “’ You ain’t no young courtin’ gal. You’se uh old woman, nearly fourty’” (Hurston 79). Joe feels the need to tear down Janie, in order to make himself feel more important, which was an important part of being a man during this time.

By reading the novel Their Eyes Were Watching God by Zora Neale Hurston, one could immediately pick up on the difference gender played during the late 1800’s and into the early 1900’s. While women were expected to stay at home and clean and take care of children, men worked to provide for their families and were considered far superior.

While these prejudices have slowly gotten better over time, most of them still exist to a small extent in today’s society. Through the characters’ attitudes and narratives, especially Janie’s relationships, and the society’s feelings as a whole, Their Eyes Were Watching God clearly displays the social issues of sexism and gender roles.

Gender Roles in "Their Eyes Were Watching God". (2016, Apr 13). Retrieved from http://studymoose.com/gender-roles-in-their-eyes-were-watching-god-essay 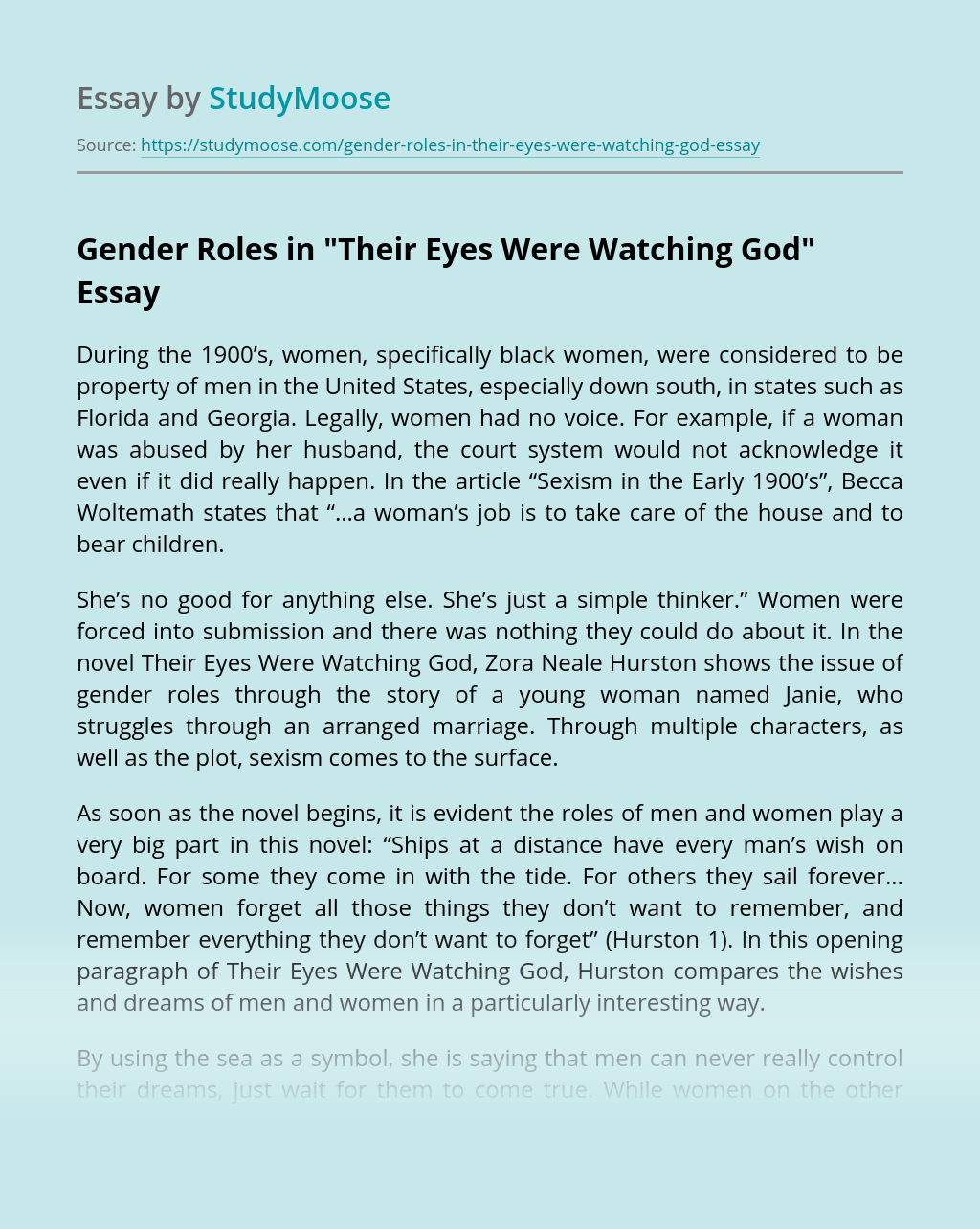