Throughout Zora Neale Hurstons Their Eyes Were Watching God

Throughout Zora Neale Hurston’s Their Eyes Were Watching God, Hurston uses a number of different items as symbols to convey the significance of certain events that take place in Janie’s, the main characters, lifespan. In this novel, Janie’s life moves in stages. With each stage comes a different item of clothing that represents another relationship and reflects Janie’s inner self during that period in time. Using an apron, a head rag, a blue satin dress, and overalls, Hurston communicates how Janie grows and evolved as a person throughout her relationships with Logan Killicks, Jody Starks, and most importantly, Tea Cake.

Don't use plagiarized sources. Get your custom essay on
“ Throughout Zora Neale Hurstons Their Eyes Were Watching God ”
Get custom paper
NEW! smart matching with writer

In the beginning of the novel, Janie’s marries a man by the name of Logan Killicks, a very successful farmer. During their relationship, Janie wears an apron. The apron shows that Janie is a housewife, merely taking orders and doing what she is told to do. During the course of their marriage, Janie came to realize that she “knew now that marriage did not make love” (25).

Janie does not love Logan. She married him for Nanny, her grandmother, and never was able to develop the love for him, as she desired. At this point, Janie begins seeing Jody Starks, and eventually leaves Logan. Upon leaving, she “feels the apron tied around her waist. She untied it and flung it on a low bush beside one road and walked on” (32) as if release of being a housewife and allowing herself to move on; no strings attached.

In Jane’s second marriage with Jody, Janie is forced to wear a head rag by Jody.

This hides Janie’s hair. Janie’s hair is very different from other women in her community. Her hair is straight, like white women, as opposed to curly. Her hair is a symbol of her uniqueness and independence. By forcing Janie to cover her hair and wear the head rag, Jody extinguishes Janie’s independence. Jody controls Janie, insults her, and destroys her self-esteem. She conforms to his wants and demands, not even fighting back when he hits her. The head rag represents Jody’s dominance over Janie in their relationship. Ultimately, this proves that their relationship in not based on true love, and this ends in a failed relationship.

After Jody dies, Janie’s meets Tea Cake, who buys her a blue satin dress. This dress is worn at their wedding and is of high significance despite the small amount of time it is worn by Janie. It is a symbol of a new start with Tea Cake. In addition, it has only been nine months since Jody’s death. At one point. Janie says to Pheoby:

Ah ain’t grievin’ so why do Ah hafta mourn? Tea Cake love me in blue, so Ah wears it. Jody ain’t never in his life picked out no color for me. De world picked out black and white for mournin’, Joe didn’t. So Ah wasn’t wearin’ it for him. Ah was wearin’ it for de rest of y’all (113).

This shows that Janie is sad about his death since she is not mourning, as the community believes she should do. Janie did not truly love Jody, however, she does love Tea Cake greatly and is “always in blue because Tea Cake told her to wear it”(110). Later in their marriage, Janie switched her attire to overalls. These overalls are nothing fancy and are worn for her work in the fields with Tea Cake. For this reason, they are proven to be a symbol of equality and true love. Neither Tea Cake nor Janie are of higher stature than one another as the men were in Janie’s past relationships. “What if Eatonville could see her in now in her blue denim overalls and heavy shoes?” (134) is a thought that Janie simply laughs at. Janie’s love is proven in her ability to become Tea Cake’s equal despite what the people of the town say about how he is poor.

Janie continues to wear the overalls after Tea Cakes death, when she returns to Eatonville. She doesn’t dress up to mourn. Janie “went on in her overalls. She was too busy feeling grief to dress like grief” (189). This further proves Janie’s feelings for Tea Cake more than anything. With Jody, Janie mourned his death and didn’t care for him, showing that mourning doesn’t mean she was sad. In this situation, Janie does not follow what is considered the right thing to do. She knows how sad she feels about Tea Cake and that is the only thing that matters to her at this point in time.

The use of clothing as symbols is a dominant element of Hurston’s writing in Their Eyes Were Watching God. It successfully conveys Janie’s emotions and thoughts throughout her life. The symbolism of clothing shows how she evolved from following what is considered “right” and becoming what she wants; someone who experienced true love. Janie wore an apron for Nanny’s dream, a head rag to satisfy Jody’s need for dominance, and a blue satin dress and overalls for true love and equality with Tea Cake.

Throughout Zora Neale Hurstons Their Eyes Were Watching God. (2017, Nov 02). Retrieved from http://studymoose.com/throughout-zora-neale-hurstons-their-eyes-were-watching-god-essay 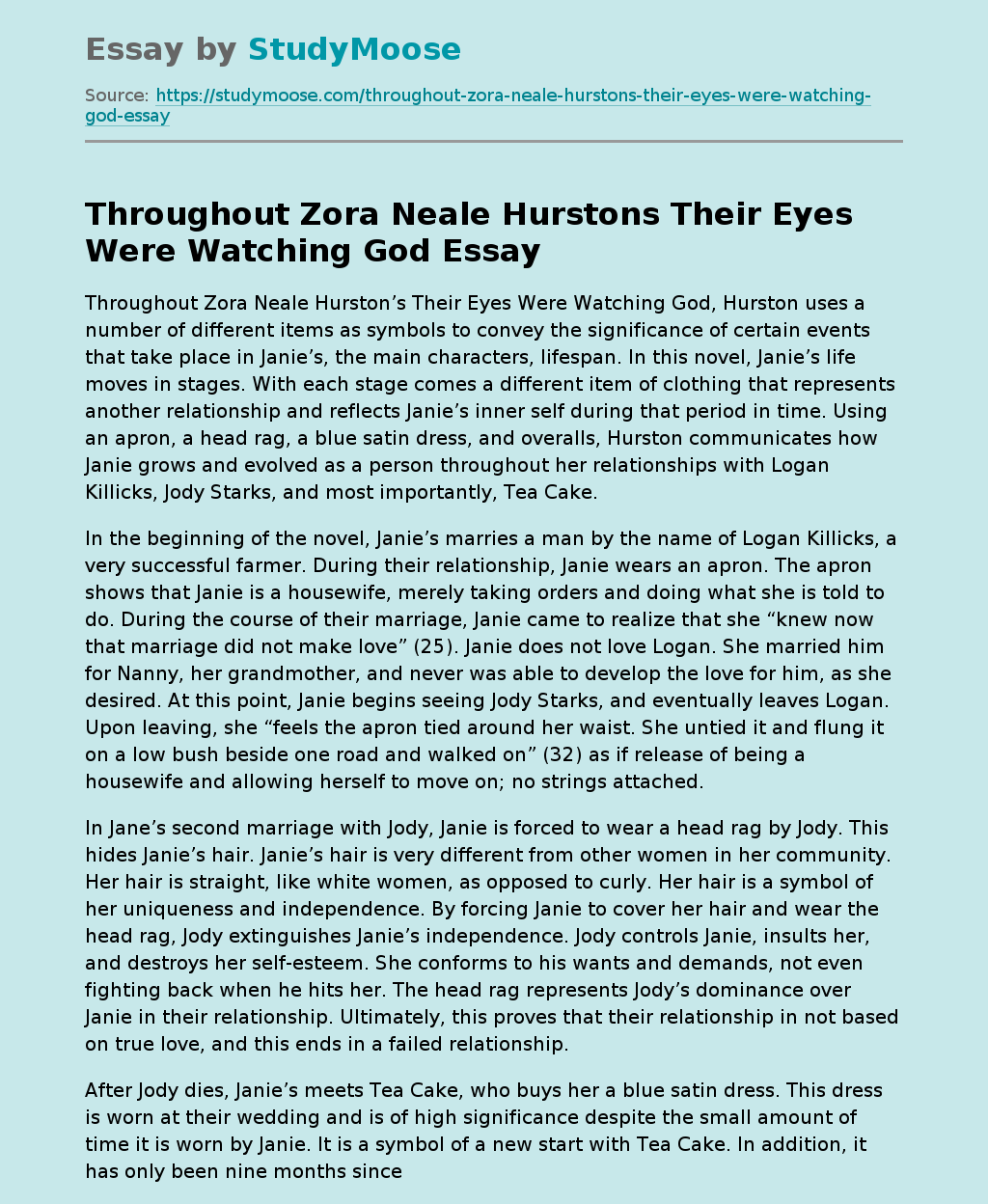