Their Eyes Were Watching God Novel

Sovereignty is often defined as the supreme power or authority over itself. In the book, “Their Eyes Were Watching God” by Zora Hurston, One important theme throughout the book that is visible is Janie’s search for her identity. Throughout the novel Janie’s search has to do with her search for a name, and also freedom and finding herself. She come across different relationships based on control, independence, imprisonment etc. In the beginning of the book, the author portrays Janie as being held back and controlled by her grandmother, and by her first husband, Logan.

Don't use plagiarized sources. Get your custom essay on
“ Their Eyes Were Watching God Novel ”
Get custom paper
NEW! smart matching with writer

Further in the novel Janie is also disabled by her husband Jody Starks. But her free-spirit stirs, and she breaks free. Logan is considered to be disabling Janie by Nanny’s outlook because she guides Janie into marrying him. Further Jody is also considered to be controlling and disabling Janie by taking her freedom as a woman making, by not accepting her for the woman she is, and trying to shape her into the image of the woman he wants.

Although the novel is revolved around Janie’s relationships with other characters, Jody and Nanny have two different views on what freedom is for Janie. It is a journey for Janie’s as she searches for her identity, and spiritual enlightenment.

In the opening chapter of the novel, Janie marries Logan Killicks, who is her first husband. Nanny feels freedom jor Janie is in Logan. This goal seems to be the most important thing for Nanny, and in her quest to get Janie married to a suitable man.

Nanny’s perception of freedom is someone who has middle-class values and financial stability, such as Logan. Nanny tried to control Jaine’s sense of value, which is why Nanny wants Janie to marry a man with financial stability. Logan begins to pamper Janie for a while, before he tries to take the action of using her for his fieldwork. ‘He’s kissin’ yo foot and ’tain’t in uh man tuh kiss foot long , Mouf kissin’ is on uh equal and dat’s natural but when dey got to bow down to love, dey soon straightens up’ (Hurston 23). The kissing of Janie’s foot portrays the care Logan has for her in the beginning of their relationship. Nanny tries to warn Janie that the affection he is giving off will not last forever. Logan seem to have the idea that women are just objects for men to put to use. Initially their relationship was based off mutual respect, but as time passed Logan became more controlling. Logan continues to try to control Janie by making decisions in there relationship. After a while Janie begins to realize that not all marriages produced love. So therefore she starts to find herself by realizing she doesn’t really love Kilicks and plans to leave him for someone she really loves. Janie realizes that Nanny’s goals and freedom were in direct conflict with her own desires. Janie discovers that “Nanny belonged to that other kind that loved to deal in scraps” (Hurston 89).

Jody Starks is Janie’s second husband, whom she left Logan for. Jody mixes perception of manhood and freedom with his right to power, wealth, and authority. Joe, just like Logan, see women as objects to be ordered around by men. Janie soon realizes that Jody only values her as a “possession” and not the human being she is. From Jody’s viewpoint women have no voice and intelligence and should be entitled to none. ‘Somebody got to think for women and chillun and chickens and cows, I god, they sho don’t think none theirselves’ (Hurston 67). As time goes by, Jody ages and becomes sick and is laying on his deathbed. This is where Janie begins to find her “voice” as she lays out all the things Jody has done while he is on his deathbed. whom took her individuality.

After attending Joe’s funeral, “she burnt up every one of her head rags and went about the house next morning with her hair in one thick braid swinging well below her waist”(Hurston 89). She knew that Jody was jealous of her looks and to hide it he makes her cover her hair. To uncover all of the life that had been resting and hiding all this time, Janie then lets her hair down and says that “mourning oughtn’t tuh last no longer n’grief” (113). This means that Janie is no longer offended with the opinions of the townspeople in regard to her behavior as a mayor’s wife, and she intends to live her life without the pressure of society’s judgment against her.

Throughout the story, Janie is looking for a sense of identity. Like Jody, Nanny tries to control Janie’s freedom, voice, and dreams. Whether she runs away and leaves her first husband Logan, or chooses to love Jody a man with no wealth or power, she is taking charge of her own destiny. Also, Hurston portrays that Jaine does not find pure happiness and freedom from all things in her past life until she does not have a husband, at all. It was a journey for Janie to find herself, her voice and her freedom. As Janie finds her freedom she portrays an image of empowered feminism, which means “the ability for women to enjoy their right to control and benefit from resources, assets, income and their own time, as well as the ability to manage risk and improve their economic status and well being”. It took for Jaine to be alone and able to control herself to find her freedom.

Their Eyes Were Watching God Novel. (2021, Apr 15). Retrieved from https://studymoose.com/their-eyes-were-watching-god-novel-essay 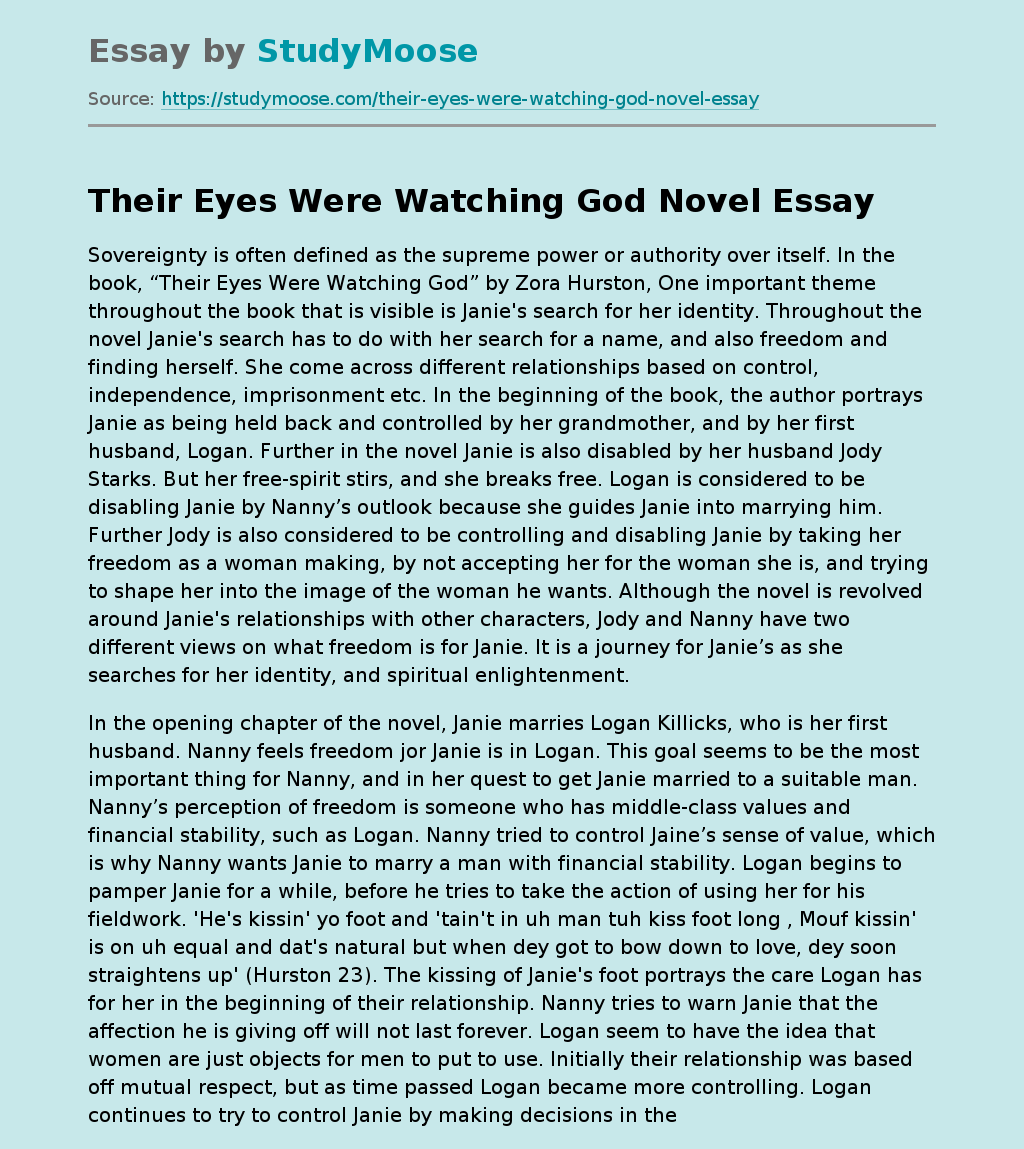