Their Eyes Were Watching God Quotes

1) Janie, on her gossiping neighbors, stressing the importance of storytelling and oral tradition: “Ah don’t mean to bother wid tellin’ ’em nothin’, Pheoby. ‘Tain’t worth de trouble. You can tell ’em what Ah say if you wants to. Dat’s just de same as me ’cause mah tongue is in mah friend’s mouf” (6).

2) Janie, to the men of Eatonville: “Sometimes God gits familiar wid us womenfolks too and talks His inside business. He told me.how surprised y’all is goin’ tuh be if you ever find out you don’t know half as much ’bout us as you think yo do.

Don't use plagiarized sources. Get your custom essay on
“ Their Eyes Were Watching God Quotes ”
Get custom paper
NEW! smart matching with writer

It’s so easy to make yo’self out God Almighty when you ain’t got nothin’ tuh strain against but women and chickens” (70-71).

3) On Janie: “She was a rut in the road. Plenty of life beneath the surface but it was kept beaten down by the wheels” (72).

5) Eatonville habitants, on Janie: “It was hard to love a woman that always made you feel so wishful” (111).

6) On Tea Cake: “Janie looked down on him and felt a self-crushing love. So her soul crawled out from its hiding place” (122).

7) On waiting for the mighty hurricane: “They sat in company with the others in other shanties, their eyes straining against crude walls and their souls asking if He meant to measure their puny might against His. They seemed to be staring at the dark, but their eyes were watching God” (151).

9) Janie, on love: “.love ain’t somethin’ lak uh grindstone dat’s de same thing everywhere and do de same thing tuh everything it touch. Love is lak de sea. It’s uh movin’ thing, but still and all, it takes its shape from de shore it meets, and it’s different with every shore” (182).

In this quote Janie’s grandmother “Nanny” is talking to Janie about letting her the rest of life easy. Janie’s grandmother is planning to send Janie off to get married because she is no longer able to care for her. Before this quote you learn that Janie was raised by her nanny and never really knew her parents. Janie’s nanny was a hard working woman that worked her whole life to right the wrong she did raising Janie’s mother. Janie’s nanny worked hard to provide for Janie and once she found Janie outside flirting with Johnny Taylor she was sure that it was time to marry Janie off. I felt this quote was important because it shows one of the aspects of the relationship between Janie and her nanny. It plays a role in the book because the after facts of this quote starts Janie on a search for true love. “What need has death for a cover, and winds can blow against him.”

-84- At this point in the book when you come across this quote Janie’s second husband Joe Starks is very sick and dying. Even though Janie knows he is dying Joe thinks that he will get better. Joe is an insecure man who refuses to let Janie come into his sick room and visit him. I thought this quote was important because it comes from Janie. It shows how she feels about death. Death, a topic that no one wants to discuss yet Janie sums up what we all want to say in this one quote. To me this quote says that no one has protection from death and no one can stop death. I think it is important to the book because later on the book it shows a relationship between poeple connected to Janie and how no matter how she feels about the death will come. ”

They seemed to be staring at the dark, but their eyes were watching God.” -161- This quote comes into play while Janie and Tea Cake are in the Glades getting ready to leave because of a hurricane. At this point Janie and Tea Cake have waited to late to leave and are trying to decide if they want to try and beat the water or just stay there. I found this quote important because it ties the title of the book in with the situations that occur in the book. They are sitting there and despite the situation around them they can still find security within each other and God. “So Ah’m back home agin and Ah’m satisfied tuh be heah. Ah done been tuh de horizon and back and now Ah Kin set heah in mah house and live by comparisons.”

-191- As you read this quote Janie is talking to Phoeby after she has returned from the Glades. Jane has been acquitted of Tea Cakes murder, because it was self defense. In this quote Janie says that she has lived her life to her satisfication. By her saying she has been to the horizon and back and she can live by comparisons now I thought she meant that she had lived to one extreme to another.

By the time she got with Tea Cake she had, had two husbands. One who felt she could work just as anybody else and another who put her up so high on a pedestal that her hair couldn’t even be worn down. But then she found Tea Cake the man who was the median between them both. This quote is important because it tells how Janie felt after going through she had been through throughout her life and she felt that with it all she had accomplished what she wanted to and that was all that counted. “She called in her soul to come and see.”

-193- Once you finish this quote you have finished the book! To me this quote is deeper that it reads, because you read it, then you have to think about what it means. Some quotes are self explanatory while others require more thought. As i read the words around this quote I thought she was reflecting on the day her love died and the day she was in court yet that day in court her lover was very much alive within her. And he flew around her ans carried away the pain. However, she called herself in, her inner self to see everything she had become. “She called in her soul to come and see”, she reflected on her life and realized how life could change a person without even knowing.

Their Eyes Were Watching God Quotes. (2017, Feb 16). Retrieved from http://studymoose.com/their-eyes-were-watching-god-quotes-essay 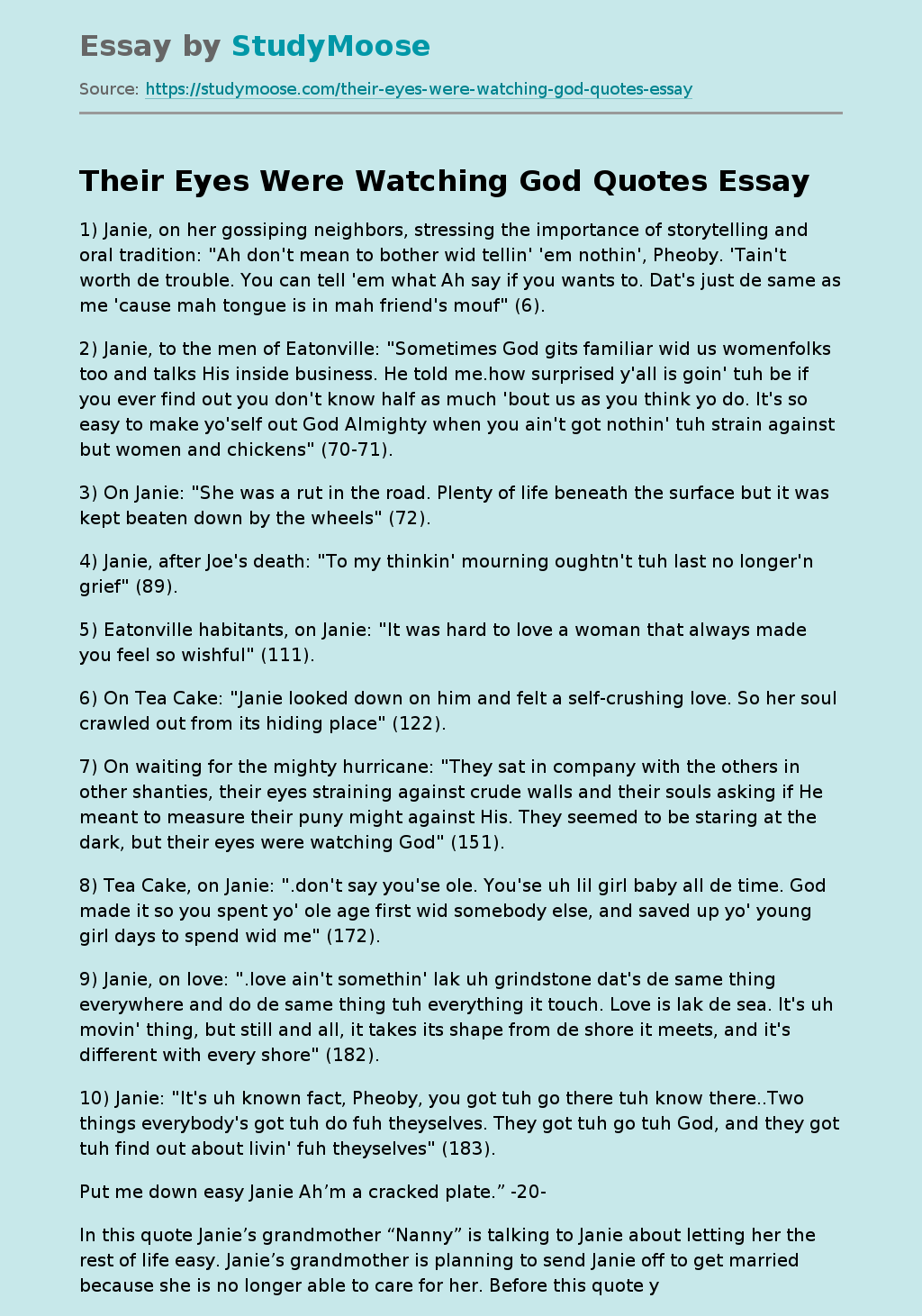