‘Happy Birthday, 1951’ is a short story written by Kurt Vonnegut. The story takes place in Dresden in Germany. The story is essentially about an old man that constantly tries to teach a six year old boy, how he believe the world should be like. The title ‘Happy Birthday, 1951’ refers to 24 October 1951 where the U. S. President Harry Truman declares that the war with Germany is officially over. That also elucidate why the soldiers are leaving the city. During the World War II, Dresden was bombarded by British and American aircraft and the whole city was completely destroyed.

Don't use plagiarized sources. Get your custom essay on
“ ‘Happy Birthday, 1951’ by Kurt Vonnegut ”
Get custom paper
NEW! smart matching with writer

That explains why the old man and the boy live in the ruins in Dresden. At that time people can’t live in the city without documents, since the boy doesn’t have documents the old man asks him when he wants his birthday to be, the boy answers that he wants it to be tomorrow.

The old man decides to give him a memorable present for birthday, as a birthday present he decides that they are going to a peaceful place without war.

At his birthday they go to the forest, while they are trying to find a place to sit, the boy suddenly sees a rusted tank, the tank gets the boy’s interest ,and he asks the old man if he can go to it. The old man refuses and then they go deeper into the forest. Eventually they find an exceptional place to sit, and they lay down for a nap.

In a while after the old man wakes up alone, the boy isn’t there. The old man panics. In the end the old man finds the boy who was in the tank playing soldier.

The main characters in this story are the old man and the boy. The old man feels guilty because he hasn’t been a good father for the boy, he expresses that several times in the story for example in “I haven’t been a good father… You are supposed to get presents.” (7. 30 – 32). Even thought the old man isn’t the parent to the child, he still undertakes the responsibility for not giving him a birthday. The old man hates the war and everything that has something to do with it. Every time the boy mentions something that’s related to the war, the old man gets upset and panicky. This is also illustrated in this quote. “…He cut the sentence short… You shouldn’t be thinking about.” (9. 85 – 87)

The old man compares the war with chaos and misery. It’s not directly written but it’s seen between the story lines. The old man is traumatized by the
war. He compares the forest with Eden, and he describes the forest idyllic, this is obvious in this quote. “There! And what do you think of this? Eden… You can have it.”

The story indicates that the old man has experienced a various war through his life. It’s not directly written but it’s seen through the story lines. “I can remember … He cut the sentence short”. This shows that He has experienced the war, and he also has a vast knowledge of soldiers, due to that the readers can assume that he may have been a soldier in the past. They boy doesn’t have an identity, since he was abandoned by his biological mother and left in care of an old man. Therefore the boy spends his time with the old man, unlike the old man the boy is fascinated by the war and soldiers. The boy has a difficult with understanding the problem with war and soldiers.

He doesn’t realize the beauty of the birthday present, because he finds the forest to be lonely and boring, “It’s very quit”, “It’s lonely”, “I like better in the city, with the soldiers and-“. The boy has also been studying the soldiers, “Black and red is the engineers …Military police” (9. 87-90). This quote clarifies his passion for soldiers, which also is characteristic for a boy in his age. The boy also respects the soldiers allot that is illustrated in this quote. “The old man stepped … To let him pass.” (8. 77 – 79). Based on these evidences we can conclude that since the boy was raised in that environment, it has had an impact on his perception of soldiers and war.

The story ends abruptly, the boy disappears and the old man finds him playing soldier in the tank. The author clarifies the whole story’s message by letting it end like that. The general message is that no matter how hard you try to convince a child about how terrible war is, they will not be able to understand it in the same way as you, because it requires experience and interest.

In the end of the story the old man gets upset, when he discovers that the boy is missing. He gets upset because he worries about him, he loves him and he also wants the best for him. Therefore the old man tries to be his role model. But the boy doesn’t recognize him as his role model. He looks up to the soldiers instead. In that way a conflict arises between them.

It is extremely important to have a role model, a role model you feel comfortable with. Role models are important for us mentally, they guide us through life during our development. We look up to our role models for inspiration and we use this inspiration to know how we should behave. 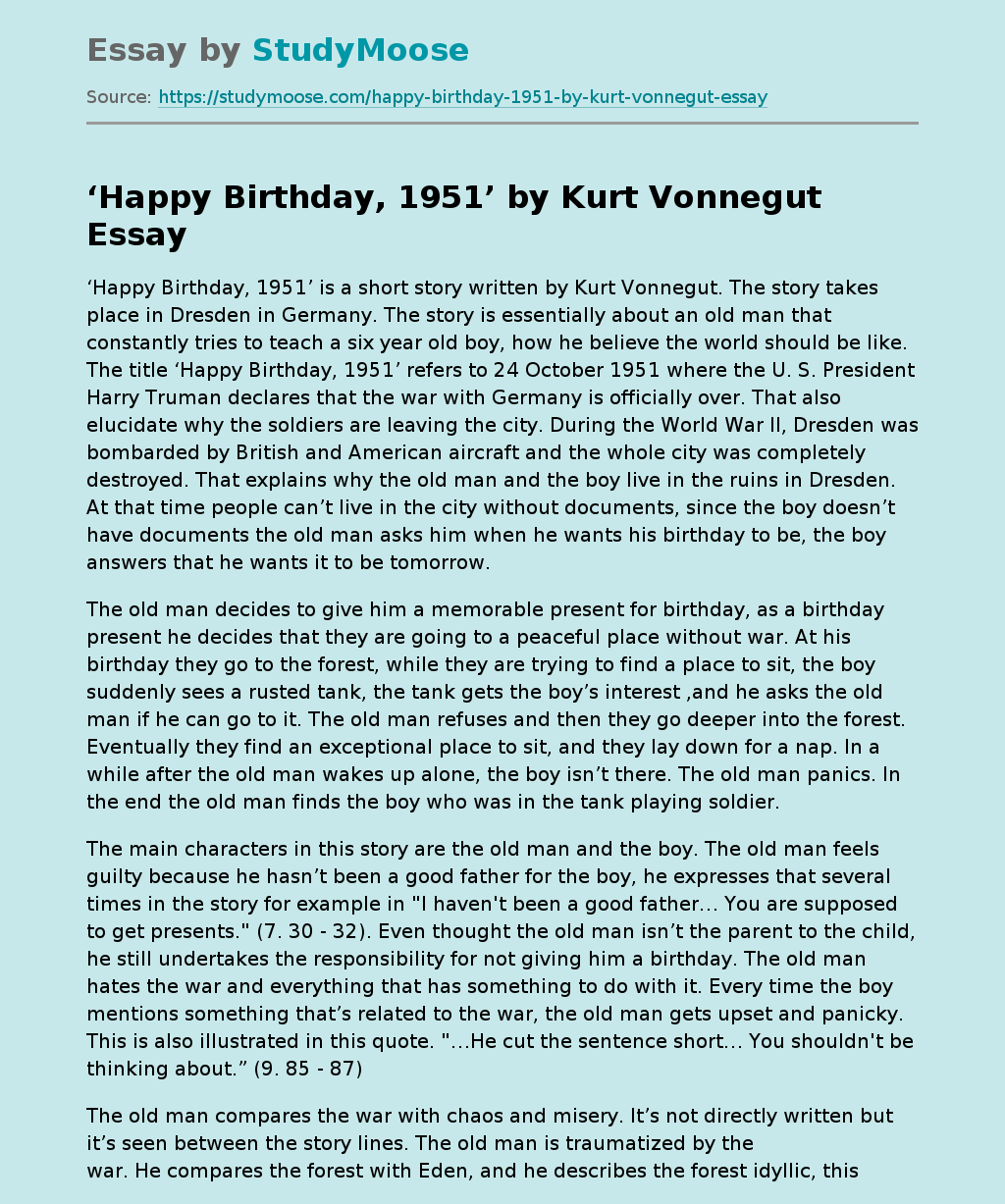