Analysis of “Harrison Bergeron” is by Kurt Vonnegut

“Harrison Bergeron” is by Kurt Vonnegut Jr. Mr. Vonnegut focuses on the equality, mentality, and physicality of a totalitarian government. In the year of 2081, everyone was made to be equal. No one was strong, better looking, smarter, or faster than anyone else. Everyone was “average”. Harrison Bergeron tells a story about the idea of a Tall Poppy Syndrome. Tall Popp Syndrome is a term used to describe the social phenomenon in which people are attacked, put down, resented, and criticized by society because of their achievement’s or talents.

Don't use plagiarized sources. Get your custom essay on
“ Analysis of “Harrison Bergeron” is by Kurt Vonnegut ”
Get custom paper
NEW! smart matching with writer

This is evident in the story, and is especially prevalent in characters and the ballerina whose talents are being completely hindered by the government (Handicapper General). Through foreshadowing towards the future, Vonnegut tries to use the Handicapper General and Dianna as tools to warn of the dangers of the two extremes, either too equal, and or, too unjust.

The story suggests that total equality amongst one another is not something worth striving for, suggesting that it is dangerous and will have unintentional outcomes.

In this story, the only way to achieve social equality, mental equality and physical equality, the citizens were subjected to inhumane, mind controlling devices the government created. The strong were forced to wear one hundred pounds worth of weights around their necks, the beautiful were forced to hide their true beauty behind masks, and the ones who were intelligent had to wear special headphones that used unbearable noise to eliminate any concentrated thought. The citizens were forced to dumb themselves down to hide their true talents, or risk facing punishment by the government.

In the literal sense, this society truly made everyone equal, but they achieved this at the expense of individuality and creativity. This kind of dictatorship doesn’t allow anyone to advance in society. Not only does it affect the individuals, but the society as a whole. If all citizens were the same, no one would stand out and no new ideas would be presented. Dianna was the one who maintained the idea of “checks and balances”. She was the epitome of every possible low in the world, of which helped her hold onto such a high position in society. Since nobody is created equal, it makes it easier for all to be the same, so there is no judgement.

Through Mrs. Glampers, the Handicapper General, and the murder of freedom and individuality, Harrison Vonnegut wants has warned the world not to lean towards being “Equal in every which way”. He implies that a shift in this direction would destroy societal advancement and eliminate culture. He satirically suggests that, in order for everyone to be treated equal, the ones who exceed the most must be brought down to the standard. Resulting in a loss of exceptional beauty and talent within themselves. Moreover, Diana resembles a fairness in the world as Harrison represents the individuality in the world.

In a world of such equality, Bergeron is the one who represents uniqueness and power through his mental and physical traits. Bergeron is no ordinary being in the world. In fact, he’s described as “A genius, an athlete, and should be regarded as dangerous. He wore a tremendous pair of earphones and thick wavy lenses. Scrap metal hung all over his face and he wore a red rubber ball for a nose. He also keeps his eyebrows shaved off and covers his even white teeth with black caps at snaggle tooth random” (Mowery).

His appearance alone would be unappealing to the world. Just walking past him one would see Harrison’s greatness just by his handicaps. “Harrison’s only crime was taking control over the television, but his motives outweighed the crime. He was shot for exposing his true beauty to the world” (Mowery). Harrison then shows he isn’t afraid of who he really is to society. Diana thinks that too much good in the world may cause too many things to go wrong. When Bergeron breaks free from his handicaps, he takes full advantage of it by rebelling against the government to the extreme. When he took over the radio he yelled, “I am the emperor! Everybody must do as I say at once!” (Mowery). Harrison had created this system, which was him and his queen at the top, followed by his loyal followers. Vonnegut tries to warn today’s world of too much inequality. Even though there are different people in the world, they shouldn’t be tied down, even though humans can become power hungry and envious. “The dark ages with everybody competing with everyone” (Mowery).

Vonnegut presents both sides of equality and inequality and implores society to choose the median. If the median hasn’t been reached, the world may turn into a living hell. Diana represented equality while her husband represents inequality. With that being said both sides do have extreme consequences. One takes away individuality while the other takes away equality. As the future approaches, the only crutch that society needs to embrace is equality that allows and also commemorates individuality.

If the world had all perfect people would we have time to reflect on each other differences? It’s important for everyone to be different so that they can grow as a society. What if we did have all our memory erased every time we had an intelligent thought? The author of this story ends it with Handicap government prevailing over their own people. The author shows through examples of action that supports how perfectly society can’t exist to relay some flaws and hindrances that may also account to the downward fall of a “perfect” society. He portrays the society by winning and prevailing but most important of all he uses it as a story line to make the plot support against it. This story will make other think about equality and show just how far it can go to pose a threat against society. This short story will have one believe a perfect society might exists although that might not always be great. We will continue to wait for the day when the expressions of emotions, sharing talents, and giving love. Love can be experienced in the eyes of those people who perceive everyone as true equals.

Analysis of “Harrison Bergeron” is by Kurt Vonnegut. (2021, Aug 04). Retrieved from https://studymoose.com/analysis-of-harrison-bergeron-is-by-kurt-vonnegut-essay 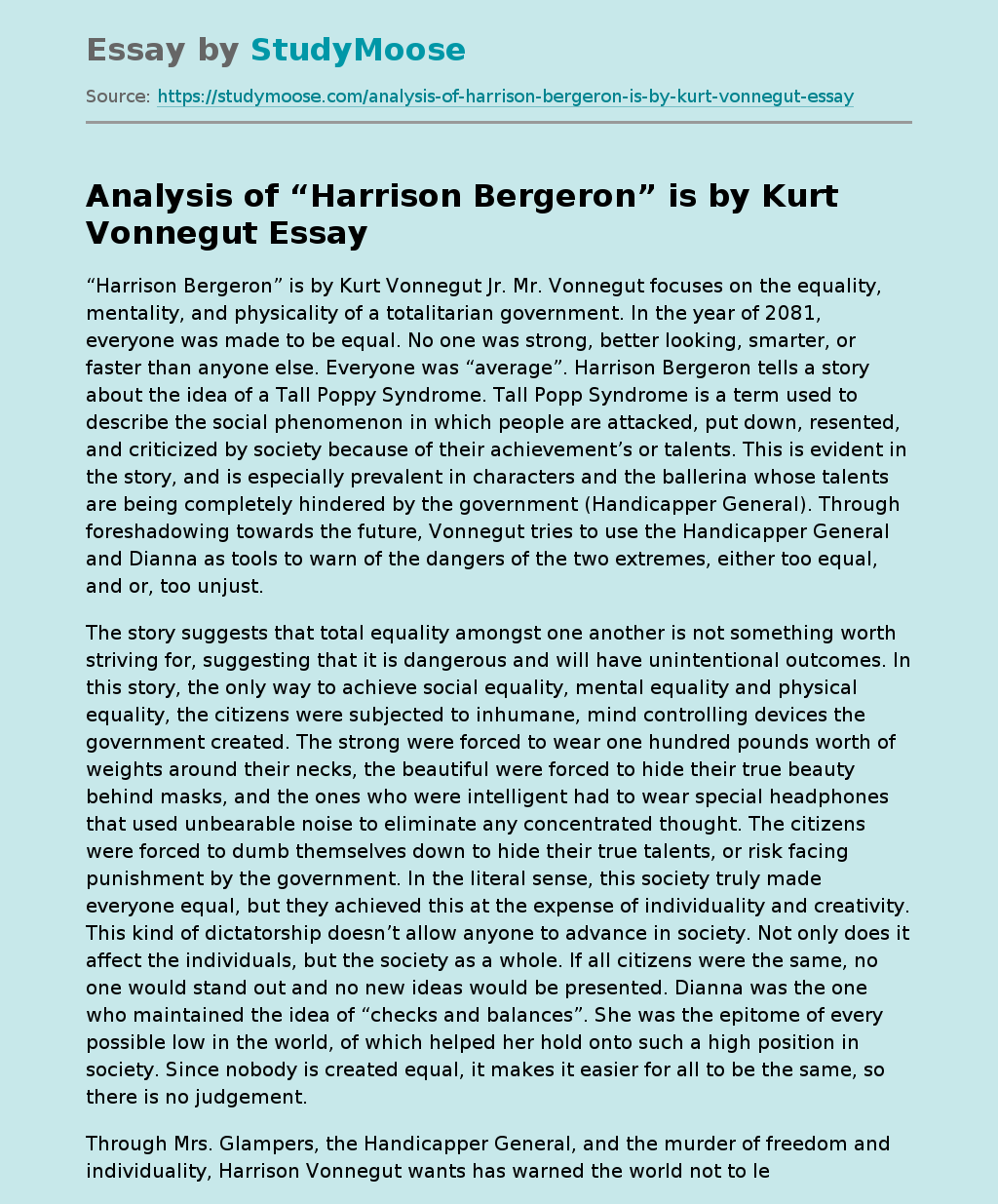