In 2081, all of society is forced to be equal. In Kurt Vonnegut, Jr.’s short story, Harrison Bergeron, everyone is assigned “handicaps” that make them equal to everyone else. These handicaps included wearing weights around the neck, wearing a mask to cover beauty, and having a device in the ear so thinking could not be overdone.

” (Vonnegut 369) Harrison Bergeron is a valid representation of the potential control of a government and the repercussions a society could face if every individual were forced to be identical.

The short story is based off of three characters: Hazel, George and Harrison Bergeron. George was forced to wear a device in his ear that prevented him from thinking too much since his intelligence level was above normal.

Hazel, on the other hand, “had a perfectly average intelligence, which meant she couldn’t think about anything except in short burst.” (Vonnegut 370) Harrison was their son that was captured at the age of fourteen by the H-G government. Harrison was athletic and handsome.

His handicaps included wearing headphones instead of an earpiece, spectacles that nearly made him blind, and about three hundred pounds of metal. “To offset his good looks he was forced to wear a red nose, shave off his eyebrows, and to cover his white teeth with black caps.

” (Vonnegut 372) Hazel and George were watching television when news came on about Harrison Bergeron escaping from prison.

The news cast told those watching that this man was extremely dangerous and flashed pictures of him upon the screen. George realized that it must be Harrison but the realization was quickly taken from his mind when the sound of a collision went off in his head. After George opened his eyes, the picture of Harrison was gone but he was actually shown on television yelling, “I am the Emperor!” Because of Harrison’s great strength and tall features everyone was cowering down to him, except one ballerina that stood up to be his empress.

Harrison had ripped off all his handicaps and the handicaps from the empress and the musicians. Harrison and his empress were dancing to the music that he forced the musicians to play, when “Diana Moon Glampers, the handicapper general, came into the studio with a double-barreled ten-gauge shotgun. She fired twice, and the Emperor and the Empress were dead before they hit the floor.”

(Vonnegut 374) Shortly after, the Bergeron’s television had gone off. George leaves to get a beer and upon his return he sees that Hazel has been crying. George asks her why she has been crying but because she can only think in short burst she can’t remember why the tears were coming. Because of George and Hazel’s handicaps, they could not remember that Harrison was their son that had just been killed on the television.

Due to everyone being forced to be equal to one other, the government made the people become stupid, slow, and even obeying the law because of fear of punishment. Harrison knew he was good looking, athletic and smart. When Harrison escaped from prison and disobeyed the law, it would be easier for him to rule over others because everyone else was still chained to the law. With his great strength and rebellion he became an “Emperor” for a short time.

Foreshadowing was shown when Hazel and George talked about taking some weight off of George’s neck. George explains to Hazel “that if he tried to get away with it, then other people’d get away with it-and pretty soon we’d be right back to the dark ages again, with everybody competing against everyone else.” George asks Hazel what she thinks would happen to the society, Hazel replies, “Reckon it’d fall all apart.” (Vonnegut 371)

The government knew that if people listened to Harrison that everyone would start disobeying the law, so they got rid of him. They could have also shot him because they got scared of what they could not control. By showing the killing on television, it showed the society what will happen if they start rebelling. A sedated society, that of which is handicapped, is much easier to control. I believe Harrison Bergeron shows what exactly it would be like for everyone to be equal. It also effectively represents the kind of control that a government would have over a society.

If the government gives everyone equality and makes them “weak” it gives the government way more power than what they already have. At some point in time everyone has the thought of an equal society but we do not think of what it would take for that to happen. Harrison Bergeron shows what the consequences would be. I believe the fact that everyone is unique should be more appreciated rather than wanting to bechanged. If people were forced to be equal life would be the same for everyone and not as adventurous and fun.

The problem with an equal society is that no one would be able to be their selves. In order for everyone to be equal, there would have to be some consequences for those who rebel against the law. Also, the handicaps would be necessary in order for everyone to be equal. This would give the government complete control over a society which could also cause problems. Harrison Bergeron is a vivid representation of the potential a government could have on a society, and the dangers of an equal society. 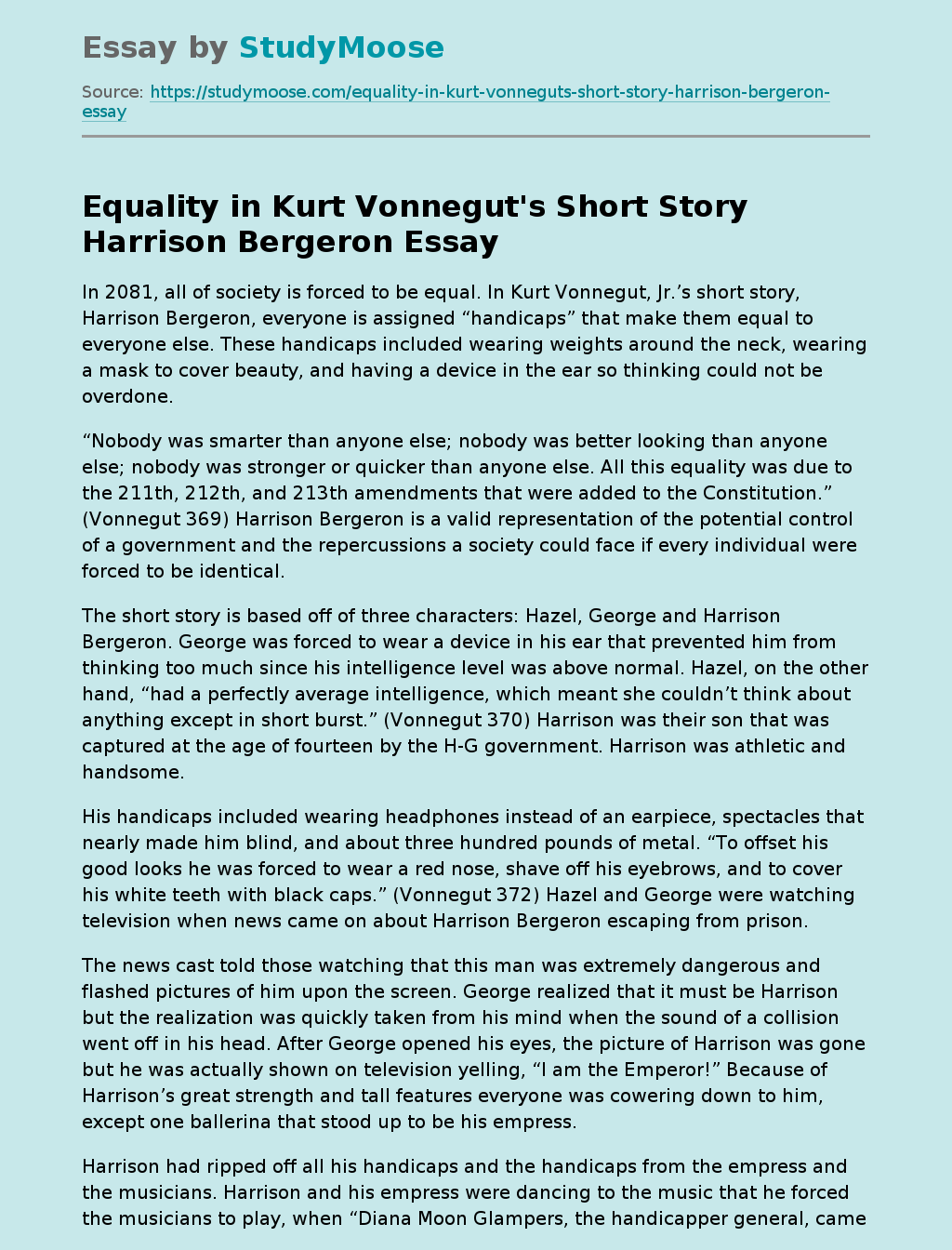