Stand for Freedom in "Harrison Bergeron" and "Born Free: Children and the Struggle for Human Rights"

Don't use plagiarized sources. Get your custom essay on
“ Stand for Freedom in “Harrison Bergeron” and “Born Free: Children and the Struggle for Human Rights” ”
Get custom paper
NEW! smart matching with writer

In the short story “Harrison Bergeron” by Kurt Vonnegut, a young man stood up for what he believed in and that ended in the loss of his life, but he did something that others never thought about doing. To “Be Free” means to have the right to advocate for yourself and others.

Everyone has the right to stand up for themselves, when they believe that change needs to occur. Similar to what the newsies did in the story “Born Free: Children and the Struggle for Human Rights.

” In the 1890s newsies went on strike from newspaper companys to show that change needed to happen. Newsies, children that sold newspapers in New York City. An estimate of about 2,500 newsies located in New York City. During the Spanish-American war the hunger for news grew in the public, after the war there became a heavy downfall in newspapers. The town’s biggest publishers started charging the newsies for every newspaper they did not sell.

The newsies became irate at the publishers, and protested against the publishers. The strike lasted for two weeks straight. The head owners of the newspaper companies won against the newsies, but the publishers stopped charging the newsies for papers they did not sell. In the story the author stated, “It may have been a small victory, but it was more then the newsies would have received had they not raised their voices.” (“Born Free: Children and the Struggle for Human Rights 263”). Although the newsies lost, they made eventful change happen. When someone stands up for their rights as a human being during a hard situation, can improve the results for others dealing with the same problem. The newsies advocated to make a change, that helped other incoming newsies not have to deal with the same situation.

People can experience freedom by breaking through whatever contains them. like Harrison did in the story “Harrison Bergeron,” by Kurt Vonnegut. In the year 2081, the Amendments 211, 212, and 213 makes all citizens equal. The Handicapper General and a team of agents make sure everyone enforces their Amendments. Fourteen year old, Harrison Bergeron a boy taken away from his parents, George and Hazel Bergeron. Harrison had been abducted because he excelled in looks, smarts and strength. George and Hazel Bergeron did not know exactly what had happened. Hazel’s lack of intelligence caused her to have lack of awareness. In 2081, those who had been above the average intelligence made others feel dumb. Harrison’s dad, George prove to have far better intelligence then the average individuals. The government makes George wear a radio to interrupts his thoughts. One day, George and Hazel watched ballerinas dance on tv. The dancers have to wear weights to counteract their gracefulness and they also wear masks to counteract their beauty. After the dance a television announcer walked on stage and read a bulletin that said Harrison Bergeron had escaped prison. A picture appeared on the screen and every feature about him completely changed. The photo then changed into a image of Harrison himself. He then stormed into the room where the dance continued to appear on the television. George recognized his son, but “the realization was blasted from his mind instantly by the sound of an automobile collision in his head.”(Vonnegut IL9). He shouted with intense emotion “I am a Empire” (Vonnegut IL9). He said the first women to stand up on her own two feet will automatically become his empress. A young ballerina stood up. He order the musician to play while him and his empress danced around. “Not only were the laws of the land abandoned, but the law of gravity and laws of motion as well”(Vonnegut IL10). Diana Moon Glampers stormed into the studio and kills Harrison and his empress. George left the room to go obtain a cold one, and when he came back he saw Hazel crying and asked her why she started crying. She says she can not remember but something happened on the television. Sometime standing up for yourself can end badly and you go nowhere, but that does not mean you did not make an impact. Harrison revealed the government does not have control over everything in your life.

Some individuals need a strong group of people to obtain some freedom and others need their own voices to have freedom. People can feel the feeling of freedom in hard or easy situations. Individuals may not achieved something great but that does not mean they did not win on the inside. When people advocate for themselves or for others that’s when they feel the freedom. In the stories, “Speech at the United Nation” by Malala Yousafzai, “Harrison Bergeron” by Kurt Vonnegut, and “Born Free: Children and the Struggle for Human Rights” shows that if you stand up for yourself or for others you can make change happen.

Stand for Freedom in "Harrison Bergeron" and "Born Free: Children and the Struggle for Human Rights". (2021, Aug 04). Retrieved from https://studymoose.com/stand-for-freedom-in-harrison-bergeron-and-born-free-children-and-the-struggle-for-human-rights-essay 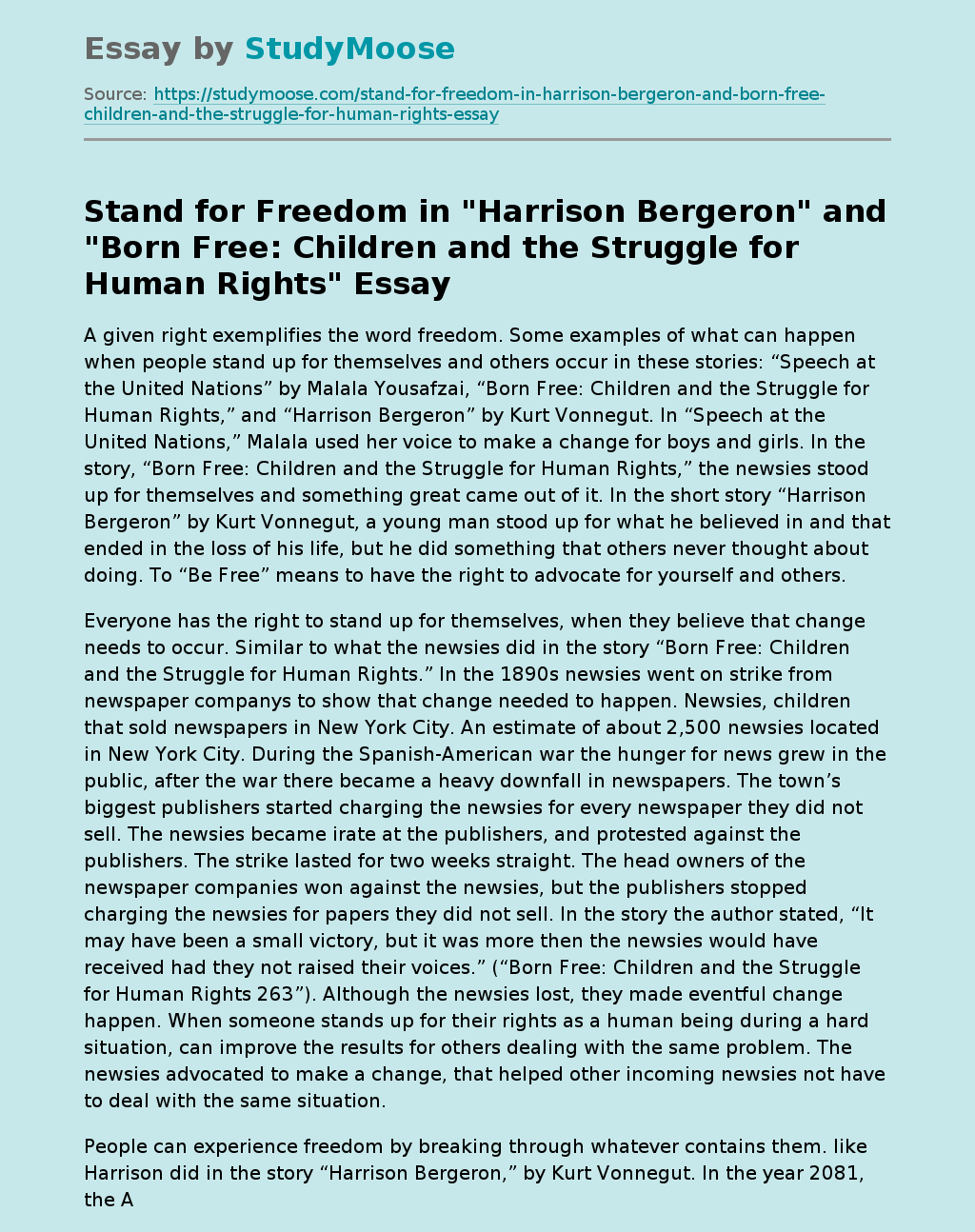