The Neolithic Revolution: The Development of Agriculture

The Neolithic Revolution was a groundbreaking and historic event where humans transitioned from hunting and gathering to farming and agriculture and settling down into cities. They learned how to domesticate animals as well as rudimentary horticulture which was a huge stepping stone for humans at that time and a truly monumental moment that shaped human history. Although the Neolithic Revolution has been viewed as a very iconic and life-changing moment with a lot of positives it has also been viewed as a negative moment and a “mistake”.

Don't use plagiarized sources. Get your custom essay on
“ The Neolithic Revolution: The Development of Agriculture ”
Get custom paper
NEW! smart matching with writer

One of the biggest positive changes that came from the Neolithic Revolution was farming. Farming was a hugely important step in human history because, before that, humans were hunter-gathers which basically meant that they hunted their food and gathered food around them. They would not stay in one place for too long because they had to follow their main source of food which were mostly animals because, without that, they would not have survived.

Hunting and gathering were an inconsistent food source because it would sometimes take days to track down an animal herd and even then, the animals could get away and they were left with nothing but the fruits and berries that they had gathered. When humans started farming, they had a reliable food source that was easy and sustaining.

Another positive change that came from the Neolithic Revolution was a human settlement. When humans started farming, they no longer had to wander around looking for the animals they used to so desperately depend on.

They started settling near their food source and had permanent settlements with people living and working together. The human settlement was a huge step in making empires and proper civilizations years later.

A negative change that came from the Neolithic Revolution was social class structures. Before the Neolithic Revolution, the human society had an “all people are equal and deserve equal rights and opportunities” kind of mindset. Each person played their own simple role and worked towards that same goal which was getting food to survive. When humans began settling and farming, they needed someone who could control and dictate how things were going to get done which is where kings and rulers came into the picture. Kings and rulers were put into power and a social hierarchy rose with them and social classes were created. I think social class structures really ruined society because it made regular humans believe they were somehow better than everyone else just because they had a title.

The Neolithic Revolution and the developments of iron, bronze, and copper gave early civilizations the opportunity to make the world what it is today.

The Neolithic Revolution: The Development of Agriculture. (2020, Sep 11). Retrieved from http://studymoose.com/the-neolithic-revolution-the-development-of-agriculture-essay 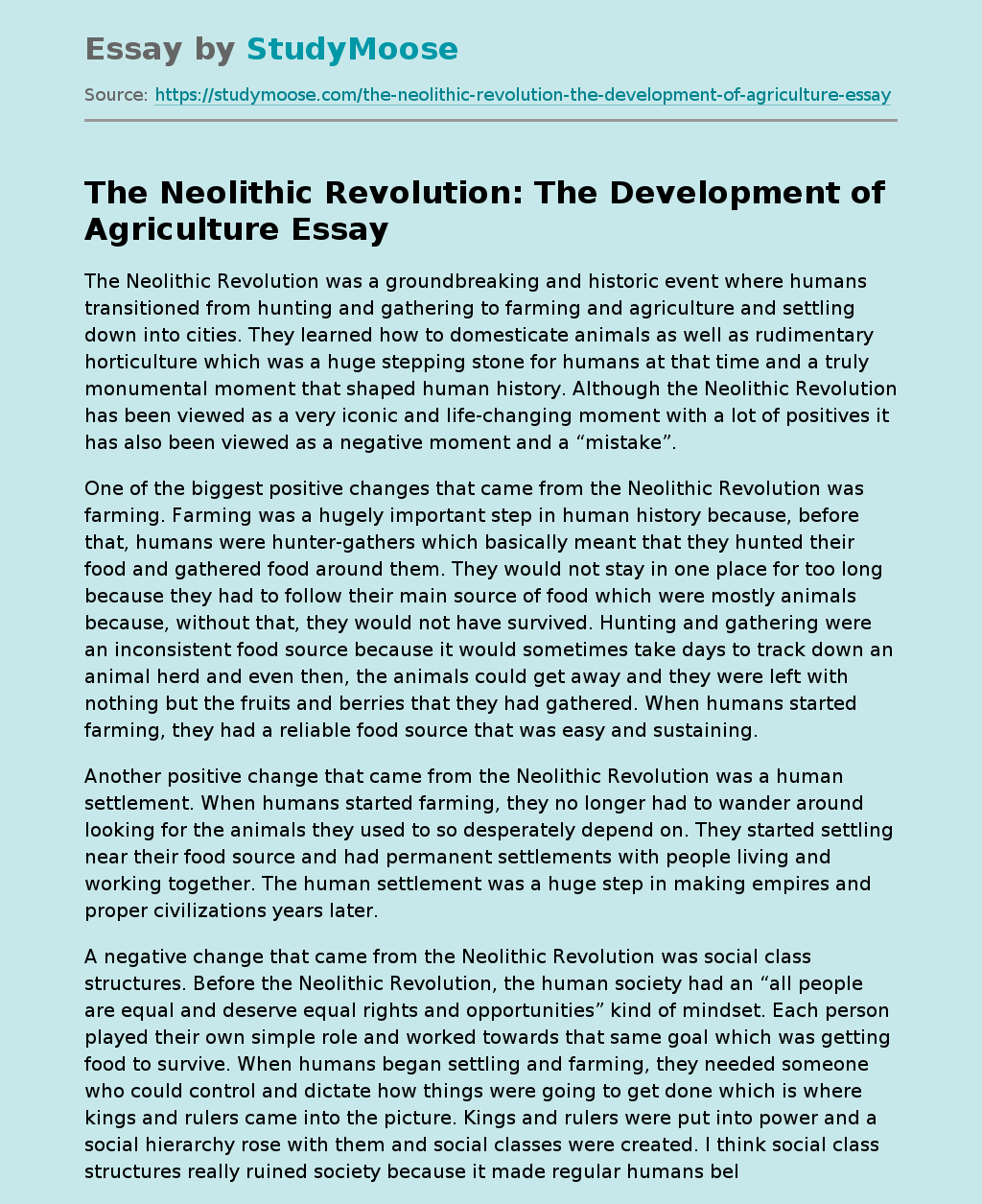