Edgar Allan Poe was an oddity. His life was odd, his legacy and literature were also bizarre (Ocker 1). He was an author of unique vision, expression, and ability. His dream was to evolve or invent the entire variety of literature as a way of expression. One of his exceptional works ‘’ The Murder in the Rue Morgue,’’ resulted to the creation of modern detective story. Poe’s work establish the production of 80% of contemporary televisions and literature programming (Ocker 1). Unfortunately, Edgar Allan’s life was mysteriously cut short 1849 at the age forty (Hopkins 41).

Don't use plagiarized sources. Get your custom essay on
“ The Mysterious Death of Edgar Allan Poe ”
Get custom paper
NEW! smart matching with writer

Known as an originator of the detective story, Poe’s own death remains mysterious (Cheuse 63). This paper seeks to conduct a literature review concerning the mysterious death of Edgar Poe.

The inexplicable death of Edgar Allan Poe continues to attract huge attention. The incident is worthy to be associated with a mysterious imagination or story by Poe himself (Beidler, 252). Hopkins reveal that Edgar Allan Poe took a business trip during the fall of 1849.

The journey to New York and Philadelphia resulted in his strange disappearance (41). He was later discovered in Baltimore streets on 7th October 1849 in a state of alcoholic stupor and exhaustion. He was admitted at Baltimore hospital where he lost his life (Hopkins, 41). A big question that ponders in the minds of many is whether Poe purely met his death as a result of alcohol, underlying health causes such as brain fever or epilepsy or a premeditated or unplanned murder (Beidler, 252).

According to Hopkins (42), a popular opinion that exists in contemporary cycles is that alcohol abuse was the main reason for Poe’s demise.

Most people were aware that Poe had a long history of excessive drinking, essentially within the depressing five years between 1842 and 1847 after the death of his young wife Virginia who succumbed to tuberculosis (Hopkins 42). Nevertheless, medical tests did not detect the cause of demise to be associated with the alleged alcoholism. The autopsy failed to confirm the existence symptoms of liver sclerosis in his body. It is of note that the finest source that affirms that Poe succumbed to a death that was alcohol related was propagated by Kennedy. J. P who wrote a publication concerning Poe’s death three days after his passing (Hopkins 43). The writer stated ‘’On Sunday Edgar A. Poe died from the effects of debauch.’’ He further unraveled that Poe was tricked by a companion who attract him to excessive drinking. Although Poe had made an oath earlier that he will never get close to a drop of liquor to the extent of signing a document. Kennedy, however, believed that Poe did not keep his promise. The implications of that event were madness, delirium, and fever (Hopkins 43).

According to Kennedy (533) in his publication The violent Melancholy: Poe against Himself reveal that from the onset, the poet had coined his professional identity using a strategy that would result in making hostile relations. In an edge of his relatively short magazinist career, he did offend a number of American writers, either through sodden incoherencies, sober threats, insulting letters, biting journalistic profiles, and lashing reviews (Kennedy, 533). In most cases, when presenting his views, Poe would assassinate other authors, he also criticized the publishing practices of stakeholders in the publishing world and ridiculed literary coteries. For instance, in one of his critique escapades, he made a remark concerning Fredrick. W. Thomas by saying ‘’ Let no man accuse me of leniency.’’ The statement offended Mr. Thomas. According to Kennedy (533), Poe did not compromise his sentiments. He had many associates and scores of foes and detractors. At the time of his demise, Rufus Wilmot Griswold wrote an acidic memoir that taunted the poet’s image for years to come. He was perceived as moral lunatic, a lonely man, and derision (Kennedy, 533). An existing dilemma is whether his poor relations with others may have influenced his untimely death.

A theory that seeks to explain Edgar Poe’s murder is the cooping theory (Walsh). The theory is emphasized in many Poe biographies, however, the premise of the notion cannot be proven as factual. According to the Cooping theory, electoral malpractices often result in murder and violence (Edgar Allan Poe Society). Poe may have been caught up in the mayhem that is electoral related. A twist of fate or not, on the very day that the poet was discovered on the boulevards it was an election time in Baltimore. In addition, the location where he was identified was a polling station and a bar. During this period, most elections in the area were mired by malpractices, violence, and corruption. Baltimore had groups of political mobs that were prepared to go to any length to ensure that their candidate won the elections (Edgar Allan Poe Society). The votes were often stolen, the voters in the opposing factions intimidated, and judges were enticed with bribes. The cliques would also kidnap blameless bystanders and order them to vote several times for their preferred candidate. The victims were also beaten and forced to take alcohol. The theory was propagated by Thompson John in the initial years of 1870 to clarify the mysterious death of Edgar Poe. A fact that supports the perspective is that he was wearing clothes that did not belong to him. This means that he might have been forced to change his clothes in order to go for another round of voting (Edgar Allan Poe Society). The theory was, however, contended by various scholars. The first analogy that opposes the theory Poe was a well-recognized individual in Baltimore (Edgar Allan Poe Society).

Smith (154) unveils another conspiracy theory that explains the mysterious death of Edgar Allan Poe. In her 1867 writing on “The Facts of Poe’s Death,” the writer discloses that Poe’s death was due to his relations with a woman. According to Smith, Poe had injured a lady and in order to revenge the grievances, he was beaten cruelly an incident that resulted in brain injuries.

Peltak introduces another conspiracy theory that explains the death of Edgar Allan Poe (2). According to Peltak one of the biographies purported to uncover proof that Elmira Shelton’s brother had, in fact, killed Poe (2). His impending marriage to Elmira Shelton a wealthy widow may have instigated a motive to assassinate the poet (Didier 119). Elmira’s family was unhappy about the marriage, and her three brothers may have wanted to protect the family money and name from an alcoholic poet with a scandalous reputation as a womanizer. In this version concerning Poe’s last days, the poet took the train to Philadelphia. The three siblings then had followed him. The men then trapped him in his hotel room and insisted he continues on to New York, threatening his life if he went back to Richmond. Poe exchanged his usual clothes and followed the instructions. The three brothers later followed him to Baltimore and killed him (Peltak (2).

In conclusion, the above review has examined various intrigues that surround the death of Edgar Poe. Based on the facts presented by various authors, it can be stated that the murder of the poet is still very controversial. The paper, however, acknowledges that he was a talented writer whose life was cut short. 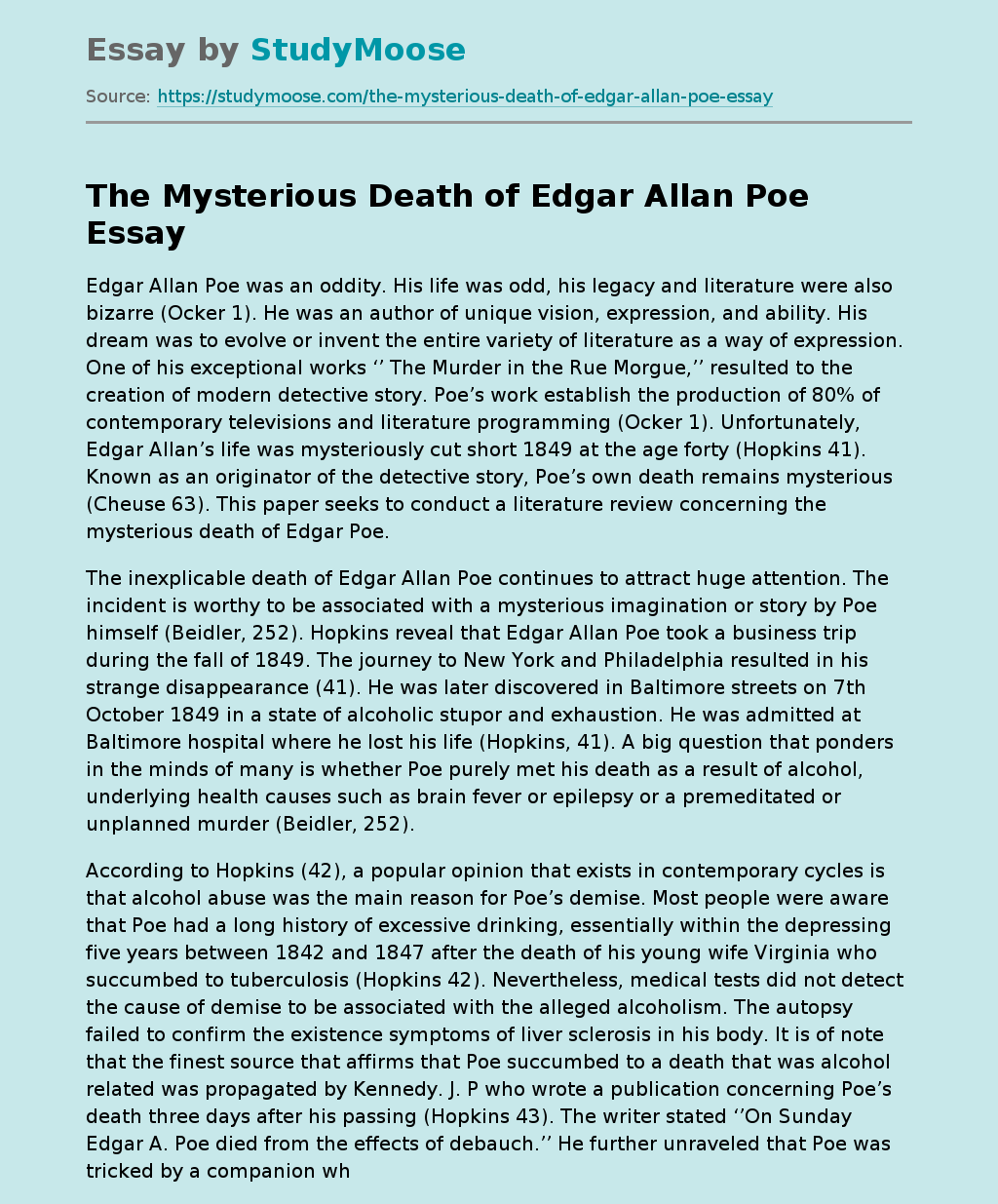