The Murder of Kitty Genovese and The Bystander Effect

In 1964, Catherine Kitty Genovese was brutally murdered by a psychopath on her way home. What makes this story disturbing is that 38 neighbors heard her screaming for help but refused to come out of their houses to rescue her from the psychopath. The time the murderer took to was long enough to draw attention from neighbors. Thus was because she was brutally murdered to death in an excruciating half-hour, during which she screamed loud enough for the 38 neighbors to hear her calling for help (Takooshian n.

Don't use plagiarized sources. Get your custom essay on
“ The Murder of Kitty Genovese and The Bystander Effect ”
Get custom paper
NEW! smart matching with writer

p). This inaction by the 38 witnesses was so inexplicable that a journalist decided to write about the story, which affected the society to date. For instance, psychologists developed a concept known as ‘the bystander effect,’ whereby the majority of people who are watching a person who is suffering, tend to prevent anyone from helping that person (Latané and Darley 377).

Based on this story, Kitty could not get help because the neighbors had a collective behavior of diffused ignorance.

The concept, “the bystander effect,” is used to explain situations where the presences of others tend to discourage good people from intervening in an emergency situation. It is some kind of social paralysis whereby when people are in a group, they tend to relinquish the responsibility of solving a problem. This behavior is manifested by how people behave in city streets filled with strangers and in the workplace where people do not socialize. The precepts of the bystander effect are: when people are in a group, they tend to refuse to intervene in an emergency, a few people want to do the right thing, and everyone tends to act in a collective behavior (Latané and Darley 377). Moreover, if cultures would promote the bystander effect, this would happen in communities that practice collective responsibilities, where people have a feeling of ‘we’ (378). However, most cultures encourage pluralist ignorance where people prefer to watch and report instead of intervening during an emergency situation.

In the case of Kitty Genovese, the bystander effect played a role in discouraging the neighbors from helping her when she was being murdered by the psychopath. According to Latané and Darley, people fear to intervene during emergencies because they are unusual and people do not know when to encounter one (378). Furthermore, they consider that it is potentially dangerous to the helper and it would be very surprising to see any person helping at all. For instance, when the neighbors heard Kitty crying for help, they did not interpret the problem at once so that they could understand what it really meant (Takooshian n.p). Some probably thought she was arguing with her boyfriend while others thought that she was a drunkard stumbling around from a nightclub, reflecting a concept that has been referred to as pluralist ignorance. The neighbors had a diffused responsibility whereby they assumed that others would take action and therefore they did not see the need to intervene.

There are other factors of bystander effect which made the neighbors refuse to act accordingly and help Kitty when she was being attacked by the psychopath, such as the concept of implementing action. Latané and Darley describe “implementing an action as the fourth model of the bystander effect where people wonder how they can help a person during an emergency. Most people find themselves having no clear means of helping a person when they encounter an emergency. As a result, they simply ignore it because they do not know what to do. In Kitty’s case, a phone call made in time might have saved Kitty’s life but it seemed that the neighbors were uncertain the best course of action that they had to take.

I have experienced a similar situation in a class where a student was being bullied by a group of boys who saw themselves as special and superior to all others. I found that I was not in a position to help the student even if I knew that what they were doing was wrong. I must have behaved in the same manner as Kitty’s neighbors because I acquired a collective behavior by becoming one of the witnesses who just watched the student being bullied by the students. I adapted a diffused responsibility were thought to myself that authorities would take care of the situation and therefore, it was not my place to intervene. I also acted in a pluralist ignorance where I thought that maybe there was something the student had done to the boys which was the reason other students were not intervening.

If I encountered a similar situation to that of Kitty’s whereby I was a witness, I would have acted in the same way as the neighbors. This is because of the first principle of the bystander effect, referred to as ‘noticing,’ whereby the “first thing that had to happen to me was to realize that somebody needed an emergency.” However, it would seem obvious that in such a city where the crime took place, there were millions of things that were going on which mean that it would also be difficult for me to notice that Kitty was crying for help. Also, if I had heard the cries, I “would not have interpreted at once that she was in danger.” I might have also thought that maybe she was fighting with her boyfriends or was just drunk and making noise at night.

Kitty’s incident reveals that people are not in a position to decide what is best for the person that needs help. They tend to act in a collective way because they think that there might be a good reason that a person is in an emergency situation and they wait to see if there are other people around who know better and should take over the responsibility of helping the victim. People tend to have diffused ignorance where they perceive that the best action to take in an emergency situation is not to intervene. This explains why Kitty never received help even though all the 38 neighbors claimed to have heard her crying for help.

The Murder of Kitty Genovese and The Bystander Effect. (2020, Nov 10). Retrieved from https://studymoose.com/the-murder-of-kitty-genovese-and-the-bystander-effect-essay 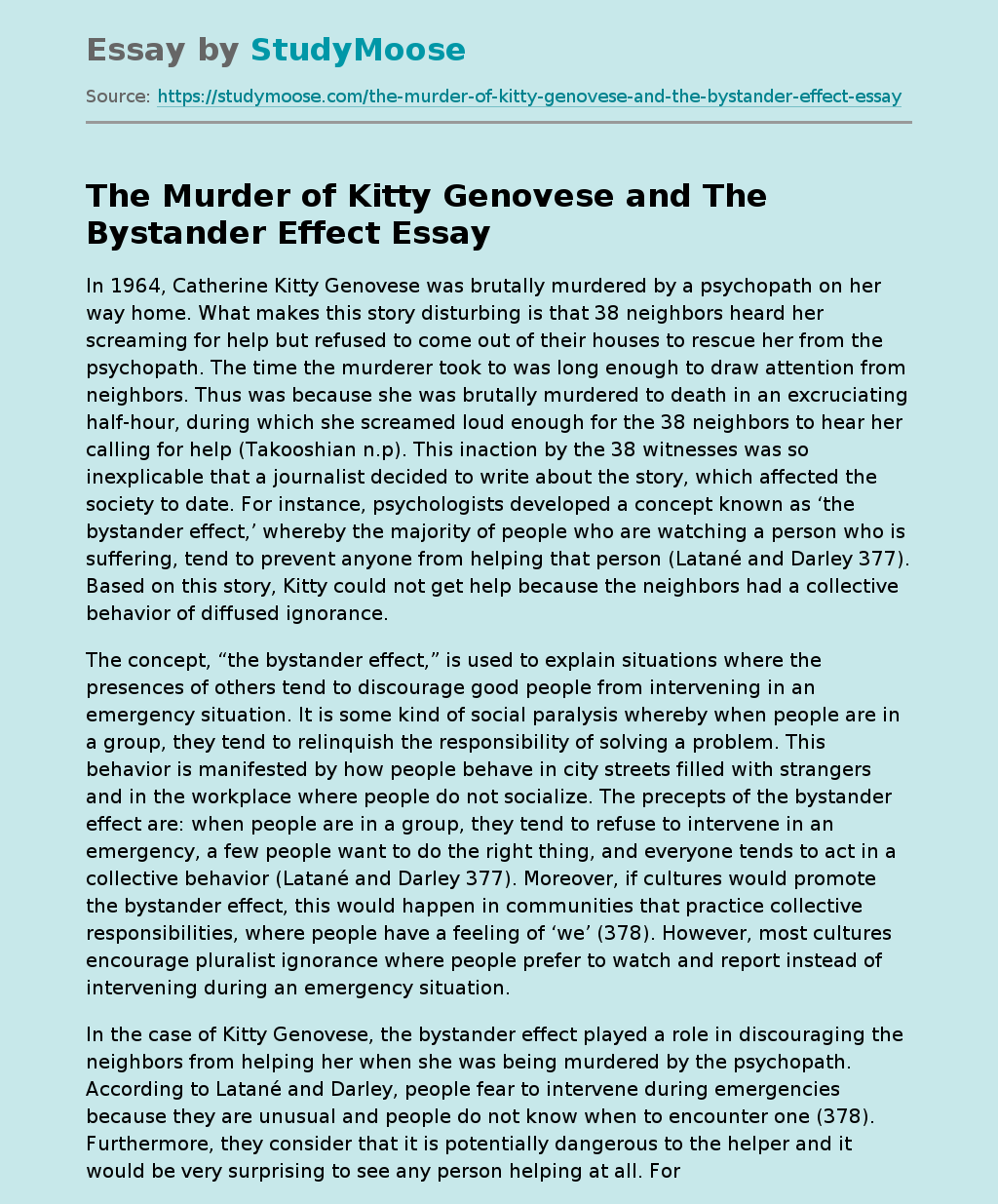