“The Moustache” by Robert Cormier

The short story “The Moustache” by Robert Cormier is about a boy named Mike who is sent to visit his senile grandmother at a nursing home. His mother warns Mike that his grandmother, Meg, will probably not recognize him. Once Mike gets to the nursing home, he is surprised when she recognizes him and calls him Mike. After a few minutes of chatting, Mike then realizes that Meg has mistaken him for her late husband, Mike who passed away years ago.

Don't use plagiarized sources. Get your custom essay on
“ “The Moustache” by Robert Cormier ”
Get custom paper
NEW! smart matching with writer

Mike follows along with the situation and says calm, the last thing he wanted was to upset or scare his grandmother. Once Mike finally leaves, he knows he had just learned a secret that was only meant to be between Meg and Mike from years ago. Everything Mike learns from visiting his grandmother suggests that when loved ones are involved in conflicting roles, a person will choose to fulfill the role that is best for those loved ones.

“The Moustache” suggests that the dark secret was that one night, Meg accused Mike (her late husband) of cheating on her. At the time, Meg was absolutely sure that she was right about her accusations, but years later she explains to Mike, “You were whispering, an awful whisper, not wanting to upset little Ellie but wanting to make me see the truth. And I didn’t answer you, Mike.

I was too proud” (Cormier 208). Meg realizes now, years later, that she is wrong. Mike told her all along that he never cheated on her, but she did not believe him. He told her the truth and then left it at that. Her husband Mike was telling the truth the whole time, and that shows that he is choosing the role that would be best for loved ones-honesty in this case. Telling the truth and leaving the situation aside is the best thing to do in his situation.

Mike was distraught when he found out that his grandmother had mistaken him for her late husband. Not only did Mike feel completely uncomfortable, but he had no idea what he was supposed to do. Once Mike started to sort of play along with this whole situation, he learned a bigger lesson than he intended on. Mike thought, “For the first time in my life, I saw love at work. Not movie love. Not Cindy’s sparkling eyes when I tell her that we’re going to the beach on a Sunday afternoon. But love like something alive and tender, asking nothing in return” (Cormier 208). Mike realizes that his grandmother is not just some elder waiting to die in a nursing home with no feelings. This realization showed him that he needed to stay calm and make sure to not scare his grandmother while trying to convince her that he isn’t actually her husband. Mike stays with her and follows along with the whole situation. Mike is making the best choice by not scaring his grandmother and staying by her side and “pretending” to be her husband.

“The Moustache” really is a short story about loved ones. The fact that Mike goes to visit his grandmother, even without his sister, is a caring gesture. Once he is put in a difficult situation seeing as Meg thinks he is her late husband, Mike remains calm and handles the situation appropriately by not scaring her and following along with what she is saying. He is thinking of her sake and well-being by not leaving or telling her that she is wrong. On the other hand, once Mike (Meg’s late husband) and Meg got into a fight a long time ago, Mike told Meg the absolute truth. He was honest with her, which is important to do with loved ones, and he left it at that. He did not get angry with her and leave her because of her accusations, he told her the truth and left it at that, which is the best option for their situation. Both of these events in the story agree with the same idea, people will choose to fulfill the role that is best for their loved ones

“The Moustache” by Robert Cormier. (2016, Apr 15). Retrieved from https://studymoose.com/the-moustache-by-robert-cormier-essay 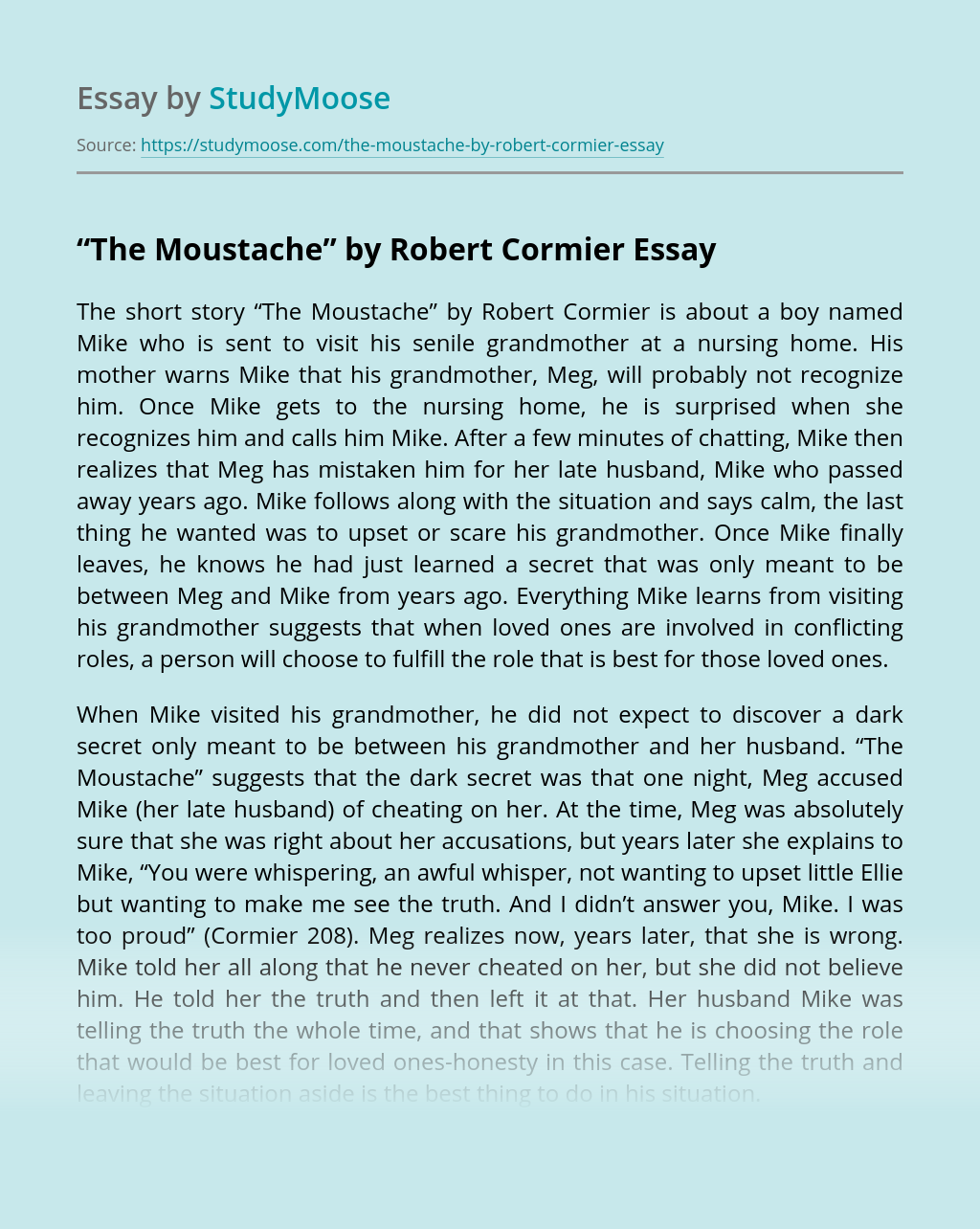