Relationship of Othello and Desdemona

Write a critical analysis of the relationship of Othello and Desdemona in Shakespeare`s tragedy Othello. Pay special attention to the interracial character of this relationship and the use of racist stereotypes in the play.

The contrast between The Moor Othello and the gentle Desdemona in Shakespeare`s tragedy Othello is noteworthy. Yet initially it looks like one complements the other: “She loved me for the dangers that I had passed. And I loved her for that she did pity them.

Don't use plagiarized sources. Get your custom essay on
“ Relationship of Othello and Desdemona ”
Get custom paper
NEW! smart matching with writer

”( Act. 1 Scene 3). But is not this precisely the weak link in their relationship? So in love, so fascinated by the pure nature of Desdemona, does Othello has these feelings over her true self, or because of her tribute to him? Even though he is widely respected general, he’s a man and the need for him to be honored by a woman is in men’s inwardness. It can be claimed that he might even needs her worship more, because, although he is considered as a noble man in times when minorities are almost trampled, his race and the perception that he is lower than his wife are still his biggest insecurities.

Attitude towards Othello constantly changes. At one time honored, then considered worst, later far more fair than black. In a moment more than just a Moor, but then again a devil black. These varieties are born not only by his race, but also his devotion to Desdemona, so beautiful and just as devastating. Their relationship is unstable from the start.

It became possible because she betrays her father. And that very same act of betrayal, made in the name of love, later feeds Othello`s fears and the conceived doubts in his mind about the purity of Desdemona. Unlike her husband, Brabantio`s daughter has a very calm temper. Her character is not that deep, as others, but she is still the object of the affections of the men in the play. She is intelligible, kind hearted and faithful to the end.

Racism in the play shows up early when Othello is compared with a black ram: “an old black ram is topping your white ewe” (Act. 1 Scene 1). It is unacceptable for a young white woman to be with an older black man. Barbantio claims that only witchcraft can make his daughter, a spirit so still and quiet, to fall in love of what she fear to look on. This refers to Othello, who, is now not seen as the man who was loved by Brabantio. He is now The Moor, who abused Desdemona and has stolen her from her father and her possible future with a wealthy white man. His love is not approved immediately, because he is not what is expected from Desdemona to be married to.

Her father rejects him, with prejudice on his race, and with fear about losing his good name in society. But others seem to look beyond the obvious and see the love of the married couple and the goodness in Othello`s heart. On the one hand discriminated, on the other well accepted, The Moor is now not just a moor, not just a general; he is husband, respected by his wife and the majority. He supports this impression, until his jealousy obsesses him and leads him to the most tragic display of it. And that is when his African origin turns against him one more time and he`s compared to a black devil, black fool, dull moor. Othello`s dark skin match his dark deed, and reflects on other`s opinion of him.

Two people in love, each completes the other. That is how Desdemona and Othello, together, look at first sight. He has unruly temper, and she is calm; she is compassionate, he needs this; she adores him, and so does he adore her. Both with such passion for each other. But The Moor`s insecurity outgrows everything. His lack of trust and his dubiety crush his common sense and Iago sows the seed of jealousy and suspicion so easily. By telling Othello that it is women`s nature to fornicate and deceive, Iago reminds him about Desdemona`s choice to elope with him, despite her father`s resentment and against his will. She marries The Moor secretly without her father`s knowledge, and instead of seeing her decision as a sign of her loyalty for him, her husband sees Desdemona`s willingness to elope as a prelude to her infidelity.

Brabantio`s words “she has deceived her father, and so may thee” ( Act.1 Scene 3) pursue Othello`s mind, not letting him to shake off the feeling of doubt when he reminds to himself his own words “My life upon her faith”(Act. 1 Scene 3). Nevertheless Othello never stops loving Desdemona, nor she stops loving and supporting him, even when he is far more different than a trusting, gentle husband. Yet the destruction of their initial idyll is inevitable. Because Iago only affects Othello`s jealousy, not creating it. The Moor`s doubts, sooner or later would have come to light, with or without Iago`s evil plan. And then the fate of this marriage, this love would still be uneasy.

The young beauty Desdemona is adored by several men in the play. So calm person she is, but is the one that causes such rage, resentment and jealousy among those men. Ironically, the man with whom she is suspected of adultery does not fell like that for her. Although she appears as the unit of friction and suspicions in the tragedy, she is one of the most moderate characters. No one else has thoughts that pure and intentioned. But that does not appear as something good for her, because even her good intentions to help, enrage Othello more and he gets even more suspicious.

But this does not change her feeling to her beloved. She constantly tries to convince him he`s the one. Even before her death she does not blame him for what he is about to do. Instead she tries to find where she went wrong. Desdemona stays faithful and true to love till she dies. Her blind faith in the honesty and goodness in people, turns out to be one of the reasons for her disastrous destiny. With her righteous heart and her tragic fate, Desdemona is a good example of the proverb: “Bad things happen to good people.”

It seems like the relationship of Othello and Desdemona was never meant to last, but even for a short term of time it was embraced with searing love, that filled their hearts with sweetness, bliss and fervor. Sad, indeed, but beautiful, how the only thing that could devastate their bond was their burning love and the consequences of it.

Relationship of Othello and Desdemona. (2016, Jun 13). Retrieved from http://studymoose.com/relationship-of-othello-and-desdemona-essay 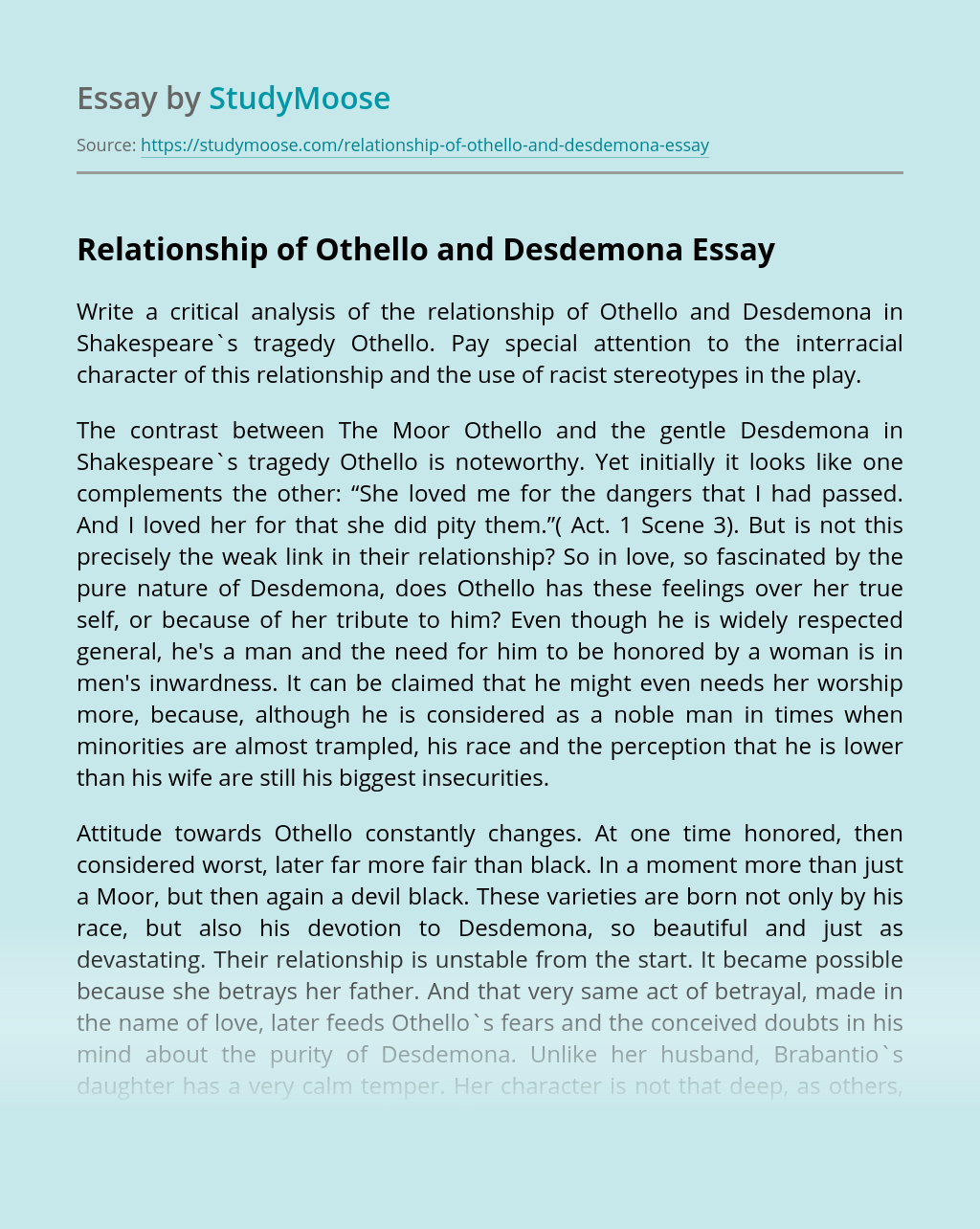