The Pros and Cons of Academic Cheating

Thousands of students have reported having cheated in college (Takach, 2006).  Cheating has increased in schools, too.  Psychologists believe that cheating is especially rampant in those academic institutions where the focus of the student is not placed on mastery and improvement.  Students who worry about school are also known to engage in cheating (Anderman et al., 1998).

The principle advantage of academic cheating is, of course, that it is easier than hard work on the part of the student.  Temporality is also an issue.

Don't use plagiarized sources. Get your custom essay on
“ The Pros and Cons of Academic Cheating ”
Get custom paper
NEW! smart matching with writer

In other words, rushed work can cut the corners of absorbed material and developing it as one’s own in the case of research papers that countless students are expected to write on their own.  Time is a genuine context for plagiarism, a form of academic cheating, whereby a student may use the words or ideas of others to present as one’s own.

The ideological basis of all academic work is that a creative, original individual has, as an autonomous scholar, presented his work to the public in his own name.

Based on this ideological foundation, the student who avoids plagiarism or academic cheating wishes that his own voice should be distinct from others’.  Academic cheating is a disadvantage for this student who understands that everybody’s use of language has certain characteristics that cannot be copied by others.  Moreover, he has a concept of self, whereby he has experienced himself as having a presence and an agency along with a voice.  It is this self that the student respects.

For this student, academic cheating deprives him of self-respect.  He would rather increase in self-esteem by having his hard work appreciated by his teachers.

Another con of academic cheating is that it leads to shame and embarrassment if in fact it is discovered that a student’s work is plagiarized.  Sociality also accounts for the interpersonal aspects of plagiarism, such as fairness.  A brilliant and competitive student would like his work to be judged in all fairness.  On the other hand, his fellow student may allow a friend to plagiarize his own work because of fellow-feeling.  In this case, academic cheating acts as a social advantage.  For the brilliant and competitive student, however, the avoidance of plagiarism is also a way of paying reverence to the person rightfully regarded as the originator of an idea or way of formulating a method of thinking.

And so, plagiarism is a kind of theft or disrespect.        Yet another reason why a student may avoid academic cheating concerns the role of education in a student’s life.  If a student believes that knowledge and education are not important in his life, he may turn in his academic work by hook or by crook, without realizing the consequences of plagiarism.  Thus, one’s education may either be considered one’s personal project or not.

Whether a student follows the rules about plagiarism or not depends on his care regarding the educational process.  After all, there are students who love school, and those that do not.  For those who love it, academic integrity is of the essence.  For those who believe that education is imposed on them by society, academic integrity is a worry that must be dealt with through academic cheating.  Although both groups of students may eventually get their degrees, time will tell that those that never cheated actually did better in the long run than those who cheated.

The Pros and Cons of Academic Cheating. (2017, Mar 25). Retrieved from https://studymoose.com/the-pros-and-cons-of-academic-cheating-essay 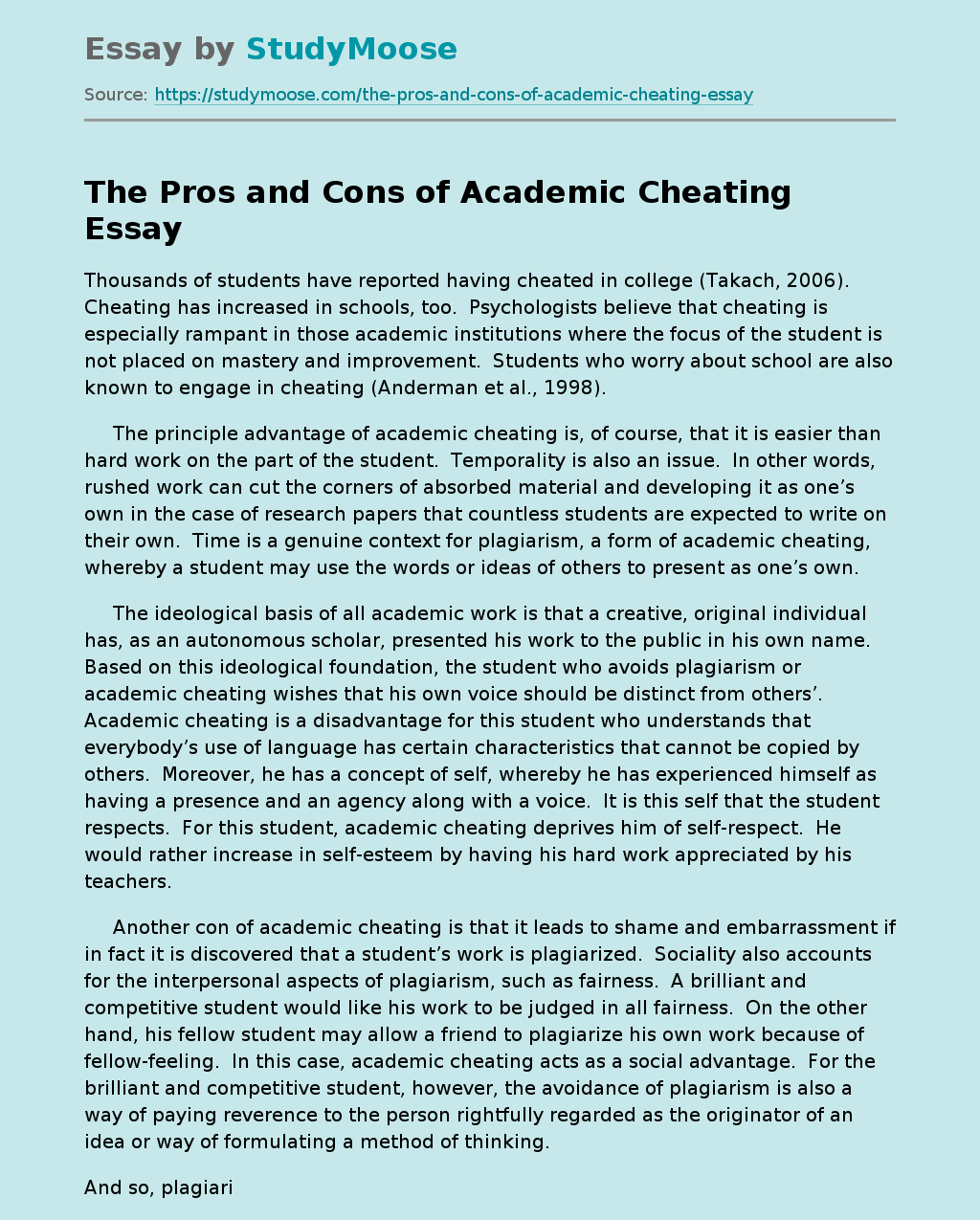