View from the Bridge - Eddie and Catherine's Relationship

At the start of the play we can see that Catherine is obedient and submissive to Eddie, this is demonstrated by stage directions such as ‘she turns to him’ and ‘she gets a cigar for him’. However at this point Beatrice is in opposition to him over Catherine taking the job at the plumbing company. So Catherine at this point is the one who is taking care of Eddie it seems, and by showing this Miller raises the question of whether actually Catherine is taking the role of a daughter in Eddie’s life, or the role of a wife.

Don’t waste time
Get a verified expert to help you with View from the Bridge – Eddie and Catherine’s Relationship
Hire verified expert
$35.80 for a 2-page paper

Her submissive attitude is shown also by the stage direction where Catherine ‘sits on her heels’ beside Eddie. But this quote also illustrates that Catherine is child-like and possibly slightly naive. Another example of where Eddie tries to control Catherine is when he doesn’t want her to take the job because he says it is in a bad part of town where he believes men will take advantage of her.

This shows how Eddie is always worried about other men coming into Catherine’s life because he believes they will hurt her or take her away from him.

We can see that Catherine looks to Eddie for approval, and also that his praise is extremely important to her, by the stage direction ‘Almost in tears because he disapproves’ which highlights the intimacy in their relationship, as well as just her dependence on Eddie’s opinion being positive. Eddie’s comment “you ain’t ‘all the girls’” demonstrates again Eddie’s protectiveness and also hints at the unnaturalness of their relationship.

In this scene Eddie repeatedly calls Catherine “the Madonna” which shows that Eddie thinks that Catherine is pure and innocent, and this highlights why he is unhappy about her going into the ‘real world’; the fact that he does not want that innocence to be removed. Eddie also tries to justify his reluctance to let Catherine into the real world by saying, “Katie, I promised your mother on her deathbed. I’m responsible for you”. Firstly, he never calls her Catherine, always Katie and the nickname demonstrates the closeness and familiarity in the relationship, but secondly, more importantly, this quote also illustrates the importance of family loyalty in the play.

Lastly, it also hints at Eddie’s fatal flaw of over-protectiveness towards Catherine. However it is not just a delusion of Eddie that he is responsible and plays a large part in Catherine’s life. This is demonstrated by Catherine ‘[grasping] his arm’, which seems to show Catherine as almost desperate to please Eddie, but also highlights the extent of her familiarity with Eddie. Eddie remarks that Catherine “[looks] like one of them girls that went to college”, which is an interesting point to make because it shows, firstly that Eddie has started to realise Catherine is growing up, and secondly, because it shows their position in life, that they could not afford to send Catherine to college. Another aspect of Eddie and Catherine’s relationship is shown by Eddie pointing out that Catherine is “walkin’ wavy”.

This comment shows again that Eddie is very protective of Catherine, and also possibly that Catherine is naive and doesn’t understand the effect that she has, because she is immediately confused and indignant at the remark. Eddie goes on to say “I don’t like the looks they’re givin’ you…The heads are turnin’ like windmills.” Eddie doesn’t like men looking at Catherine and we get the impression that he thinks they will take advantage of her. When Catherine meets Rodolfo we are shown again how naive she is by her ‘wondrously’ asking “How come he’s so dark and you’re so light Rodolfo?” This is such a child-like question that it really highlights how much she has been shielded from the ‘outside world’ by Eddie and Beatrice. When she asks Rodolfo to sing you can then see that Eddie is uncomfortable with the rapture with which she listens and he ‘rises and moves upstage’. He then rises ‘with iron control, even a smile’ and moves to Catherine to ask her “what’s the high heels for”.

This uncovers Eddie’s fatal flaw of jealousy because it shows how he cannot bear for her to give attention to anyone else but him. Eddie then takes his anger out on Catherine saying “Do me a favour, will you? Go ahead”. Miller writes that Catherine is ‘Embarrassed now, [and] angered’, this is the first time that Catherine shows any discontent or anger towards Eddie. This seems to show Catherine is less bothered about annoying Eddie than about being embarrassed in front of Rodolfo. This is also the first sign of any slight strain in Catherine and Eddie’s relationship. We further see that Catherine paying attention to Rodolfo makes Eddie uneasy when she pours sugar for Rodolfo and Eddie is watching ‘his face puffed with trouble’. Miller demonstrates another change in Catherine and Eddie’s relationship, by illustrating Eddie’s reaction to Rodolfo and Catherine’s date at the Paramount. Eddie now seems jealous of Catherine and Rodolfo’s relationship, because Miller shows him waiting around for Catherine and Rodolfo to arrive back.

This jealousy is further highlighted by Eddie telling Catherine that Rodolfo only wants to marry her for the American passport. The audience is shown a new part of Eddie and Catherine’s relationship when Beatrice complains to him that it’s been almost three months since she was last ‘made a wife’. Eddie’s great attention to his attractive niece and impotence in his own marital relationship shows new undertones to Eddie’s feelings for Catherine. Although Eddie seems unable to understand his feelings for his niece until the end of the play, other characters are aware. Beatrice is the first to express this possibility in her conversation with Catherine when she mentions how Catherine still “[walks] around in front of [Eddie] in [her] slip”. Alfieri also realizes Eddie’s feelings during his first conversation with Eddie saying how sometimes “there is too much love for the niece” and then saying to Eddie that she can’t marry him. Eddie does not comprehend his feelings until Beatrice clearly articulates his desires in the conclusion of the play, “You want somethin’ else, Eddie, and you can never have her!”

At the end of Act 1 Catherine starts off trying to help Beatrice keep the peace between Eddie and Rodolfo. However after Eddie makes the jibe to Marco about his wife being unfaithful she begins to provoke Eddie by asking Rodolfo to dance because she knows Eddie won’t like it. This demonstrates Catherine is no longer in Eddie’s thrall. On page 44 Catherine starts talking to Rodolfo about living in Italy with him and then says that she is “afraid of Eddie” in America, then on page 47 she says to Eddie whilst ‘trembling with fright’ “I think I can’t stay here no more”. This shows a complete change in their relationship, that now Catherine is afraid of Eddie and is distancing herself from him. Catherine’s ‘sobs of pity and love for [Eddie] break her composure’, with this line Miller is demonstrating to the audience that Catherine has a mixture of feelings for Eddie – she is scared of him, but at the same time she also honours their past. In this same scene after Eddie has kissed her and Rodolfo, Catherine ‘tears at Eddie’s face … [and] [stares] at him in horror’.

This illustrates how Catherine’s feelings and attitude to Eddie begin to permanently change. Until the very end before the immigration officer’s turn up at the house Eddie is still trying to stop Catherine marrying Rodolfo. However after this point Eddie completely gives up and no longer tries to stop Catherine. When Eddie forbids Beatrice from going to Catherine’s wedding and Catherine shouts at Eddie calling him “a rat [that] belongs in the sewer” and Eddie ‘seems about to pick up the table and fling it at her’, it seems that there is nothing left of the loving and caring relationship that they had in the beginning of the play. However it is clear that beneath the surface she still cares for Eddie, because she tries to get him to leave the house before Marco arrives at the end, and she also attempts to get him to listen and make-up with Rodolfo.

View from the Bridge - Eddie and Catherine's Relationship. (2017, Jan 28). Retrieved from http://studymoose.com/view-from-the-bridge-eddie-and-catherines-relationship-essay 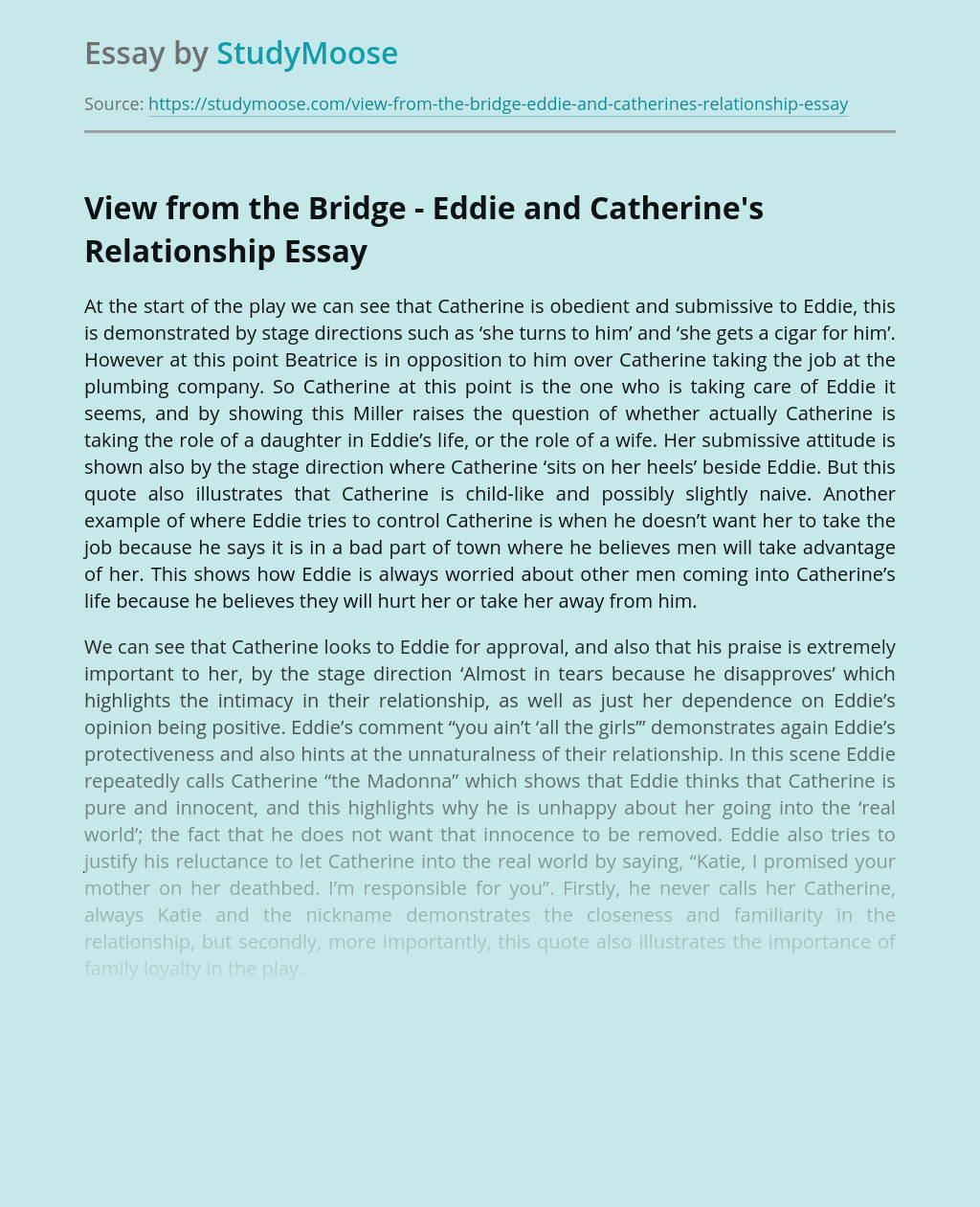 Don’t waste time
Get a verified expert to help you with View from the Bridge – Eddie and Catherine’s Relationship
Hire verified expert
$35.80 for a 2-page paper
Stay Safe, Stay Original