Relationship and Tension in the play "A View from the Bridge"

In this essay I am going to discuss how tension is created in the play “A View from the Bridge” written by Arthur Miller, but more specifically how tension is created at the end of Act One. A View from the Bridge is set in Red Hook, New York full of Italian Americans who struggle to earn a living. In the 1950’s, Italy was a very poor country however immigration was made illegal before this, in 1946. The play goes on to tell us about the Carbone family, an American family consisting of a couple – Eddie and Beatrice and her sister’s orphaned daughter; Catherine.

Don’t waste time
Get a verified expert to help you with Relationship and Tension in the play “A View from the Bridge”
Hire verified expert
$35.80 for a 2-page paper

Having raised Catherine since she was a small girl, Eddie is extremely possessive and controlling of her, which we come to see more and more as the play progresses. When Beatrice’s cousins Marco and Rodolfo come to stay with the family illegally, to try and get work and a sufficient amount of money to send back home to Italy, tensions rises as Eddie feels threatened as Marco’s alpha male status, which causes a shift in balance in the household.

As we read the play, we come to see how Eddie’s petty insecurity gets the better of him, causing an inevitable tragic ending.

Towards the end of Act One, we see the tension in the Carbone household reach a critical level, and it is clear for all to see. The characters attempt to ignore, hide and even relieve this tension by all means necessary, although whatever they do seems to make the atmosphere even more tension filled.

Relationships between certain characters – such as the one between Catherine, Rodolfo, Eddie and Beatrice and the relationship between Eddie and Marco create tension in different ways, and sound/music, action, movement and gesture all contribute to the rising tension at the end of Act One.

We see many different examples of tension when it comes to the relationship between Catherine, Rodolfo, Eddie and Beatrice. For example, Catherine’s first words in this scene are “You know where they went? ” This automatically causes accidental tension between Rodolfo/Marco and Eddie because Catherine is exclaiming to Eddie that the men have travelled, making Eddie feel angry as he doesn’t to seem in any way or form weak compared to Rodolfo and Marco.

In Eddie’s eyes, he sees this as the two brothers have something over him, so now he tries in any shape or form to ‘win back’ Catherine. As well as this, the way Catherine says this seems to be with pure enthusiasm and excitement which shows how naive she is to her surroundings. This reflects Catherine’s general behaviour as she is nearly 18, and doesn’t seem to notice the effect of her actions on other people. Additionally we can clearly see Eddie’s resentment of Rodolfo when Rodolfo mistakenly angers Eddie when he says “lemons are green”.

This is said in response to Eddie trying to belittle the brothers and imply their trade is dishonest, so when Rodolfo says “lemons are green” this makes Eddie look the fool and we already know that Eddie feels bitter about the two brothers, especially Rodolfo so when he makes him look stupid, automatic tension is created. It does so in the way that Eddie doesn’t want to be outsmarted by Rodolfo because he doesn’t want to look as if Rodolfo is superior to him.

When Eddie has a go at Rodolfo for taking Catherine out to the movies, and returning home later than she usually does, Eddie is clearly on the brink of a full blown rage, and when he starts to tell Marco this, Marco instantly orders, not tells Rodolfo that he will from now be back home in time. This specifically doesn’t create tension but shows us more of Marco’s alpha male position, which Eddie is obviously threatened by. What does create tension is when Beatrice defends Rodolfo when Eddie is trying to prove it point that Rodolfo is the cause of Catherine staying out late by saying “Well, he didn’t exactly drag her off Eddie.

” This shows to us the Beatrice is defending Rodolfo as she is disagreeing completely with what Eddie, her husband is saying. This obviously creates tension because as a wife, Beatrice is meant to support and agree with her husband, however she is disagrees with what Eddie has said, as she believes that Eddie has inappropriate feelings towards Catherine, so Beatrice will obviously want to get Catherine out of the picture as soon as possible so she can feel that she has ‘her husband back’.

After this Eddie starts to openly criticise Rodolfo in front of the household, but more especially it’s directed at Catherine, so Eddie can convince her that Rodolfo lacks any type of masculinity. He does this by saying “He’s a cook, too! … He sings, he cooks, he could make dresses.. ” by saying this he is implying that these stereotypically feminine skills mean the Rodolfo is no kind of man, or at least in Eddie’s eyes which means he isn’t right for Catherine. As well as this although Eddie never actually says it in the play, he often implies that Rodolfo may be gay, which is what he may be trying to do here.

This creates tension because although Rodolfo doesn’t clearly see it, Eddie is openly mocking him, and making him look like less of a man. The tone of which Eddie says this in is obviously meant to knock Rodolfo but he is totally oblivious to Eddie’s growing resentment, which creates more tension as it angers Eddie as it doesn’t spark a reaction. Miller uses music and sound as well as dialogue to show the tension at the end of the scene. For example when Catherine puts the record “Paper Doll” on and dances with Rodolfo, many forms of tension are created here.

For instance, the lyrics of the song are all about someone taking away someone from another person, who is exactly what Eddie feels Rodolfo is doing to Catherine. So the lyrics in the record will cause tension as Eddie believes this is what is happening, and it’s almost ironic that Catherine chooses this record to play. The most obvious form of tension when Catherine and Rodolfo dance, is simply the fact that they’re dancing. As we know Rodolfo and Eddie were not having a nice conversation before when Catherine suggested dancing, and Rodolfo was very weary of Eddie’s behaviour.

So the fact that they’re being quite close and intimate in front of Eddie is bound to cause tension as Eddie doesn’t like Rodolfo, so the fact they’re dancing is bound to cause tension. Also, the fact that Rodolfo has spent money which he should be saving (like Marco is) annoys Eddie because he feels that the two brother should be keeping a low profile instead of publicly making themselves known, and by shopping this means that Rodolfo has gone out, which means people would have seen him and etc.

So this creates tension as it annoys Eddie that he’s off gallivanting buying records and clothes, instead of working hard and keeping a low profile. After tension being made by music, Rodolfo turns the music off abruptly, which almost acts as Rodolfo’s reaction to what Eddie says. The lack of music means that everything that is said can be clearly heard, and it means the characters have nothing to ‘hide’ behind.

This creates tension as the lack of music symbolises Rodolfo’s patience with Eddie, as his comment was unjustified and Rodolfo obviously felt offended enough to turn off the music. Action, movement and gesture are additionally used to reveal tension in the household, for example when Eddie is talking about Rodolfo and how Eddie is different (and better) than Rodolfo, he has “unconsciously twisting the newspaper into a tight role…until it eventually tears in two…” This automatically creates tension as it is if Eddie has subconsciously been showing them all his true feelings of Rodolfo.

As these are stage directions, we can indefinitely see the violence that Eddie is holding on to, and this symbolises his feelings towards Rodolfo. After this Eddie tries to teach Rodolfo boxing and instead, ends up punching him in the face. Eddie obviously does this to show off, to prove to everyone how masculine he is and how much better he is and weak Rodolfo is. He does this to make up for Rodolfo’s earlier comment where Eddie felt as if he was being made a mockery of, and this gives Eddie a chance to show off his physical strength against Rodolfo.

In conclusion, Arthur Miller creates tension through the use of stage directions, dialogue and many other different techniques. He often uses the stage directions to symbolise the physical status of his characters, which ultimately reflects subconsciously how they really feel about one another, and this is what really shows us how much tension there is created and how much drama there is at the end of Act One.

Relationship and Tension in the play "A View from the Bridge". (2016, Sep 16). Retrieved from http://studymoose.com/relationship-and-tension-in-the-play-a-view-from-the-bridge-essay 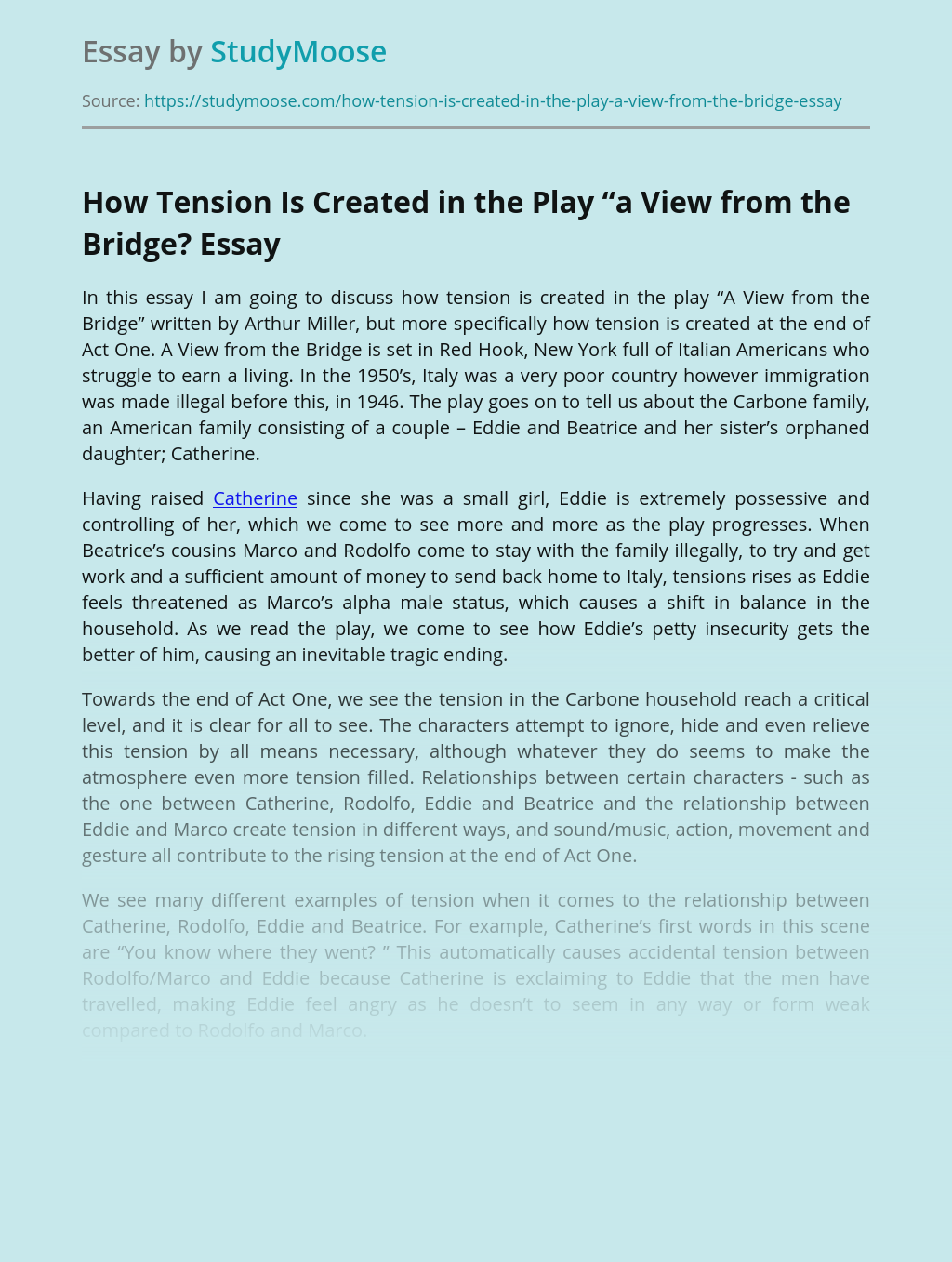 Don’t waste time
Get a verified expert to help you with Relationship and Tension in the play “A View from the Bridge”
Hire verified expert
$35.80 for a 2-page paper
Stay Safe, Stay Original