How effectively has Steinbeck created tension during the incident with Candy's dog?

The killing of Candy’s dog in Steinbeck’s novel “Of mice and men” is a very important incident. The author makes this scene very tense using different techniques. Everything starts because Slim considers the dog is useless and has a bad smell. “He ain’t no good” (p70). And as he just got five puppies he believes Candy could make good use of one of those. Candy, very nervous and doubtful, finally accepts that killing his dog, which has been with him for a very long time, will be the best to do.

Turn in your highest-quality paper
Get a qualified writer to help you with
“ How effectively has Steinbeck created tension during the incident with Candy’s dog? ”
Get high-quality paper
NEW! AI matching with writer

Even though he knows that he will miss him. Carlson, described as “thick bodied” (p70), goes out of the ranch and kills the dog.

These moments in the ranch are of absolute silence, and nobody is able to break this silence. “Silence fell” (p75). Time seems to pass very slowly; every sound scares everyone, until we can finally hear a shot from outside. The poor old dog was killed, we knew he should die, but didn’t want it to happen.

After this death, everything came back to normality in the ranch, or the men were at least talking to each other again.

In these pages, Steinbeck uses different techniques to achieve tension and time passing slowly. Time passing slowly can be shown when he starts sentences with a conjunction. “And slim …” (p74). “And the silence … ” (p75). This creates a long pause between one sentence and the other, giving a sense of conclusion. Steinbeck uses time in a very special way to increase tension.

The more slowly the time passes, the tension increases greatly, “A minute passed and another minute” (p75). The author is really emphasised in time, we can almost listen the tic-tac of the clock, which makes us feel nervous, not really about what is going to happen, but whatever it is; we want it to happen immediately.

Steinbeck also uses a series of short sentences in page 75, just before the smelly dog is going to be killed. “It was silence outside. Carlson’s footsteps died away. The silence came into the room. And the silence lasted.” (p75) This short sentences makes the reader pause a lot, it suggests that something dramatic is about to happen. It makes everything be very tense, you could just cut the tension with a scissor.

In pages 75 and 76 there is a lot of repetition of the word silence. Steinbeck uses this word seven times through the passage. He really wants us to know about the atmosphere in the room, in complete silence. George won’t even break himself the stillness by shuffling the cards, but everybody is grateful for things that break the silence. “A little gnawing sound … all the man looked toward it gratefully.” (p75). This silence is personified by Steinbeck “The silence came into the room” (p75). It seems as if the silence is another character in the scene, invading the room, making everybody feel nervous. It really increases a lot the tension.

Steinbeck seems to have divided the characters, Candy: the one being hurt, Carlson; acting as the antagonist, the rest of the man; just avoiding the situation, and Slim acting as a sort of judge. Candy is suffering and is very uncomfortable as we can see in these pages. He might even be desperate. “Candy looked from help from face to face” (p72). This shows Candy’s loneliness, he is alone while his dog is about to die. Carlson clearly is the antagonist; he is waiting anxiously to kill the dog, to shoot the back of his skull.

He does not care about the bond between Candy and his dog; he doesn’t feel any emotion at all. This is seen through the following quotation “I’d put the gun right there” (p72). George, Whit and the other men are evading the situation. They dislike the dog too, but prefer to stay in absolute silence and play cards instead of helping his good old friend. Slim is acting as a sort of judge, because he is trying to please Carlson and at the same time convince Candy about the situation.

It is night in this scene and very dark. “Darker’n hell in here” (p70). It shows that something bad is about to happen, and when it is about to happen, or when it gets near, the darker it gets. “Out into the darkness” (p75). The dark sky is invading everything, everyone. Death is near. They can fell it in this atmosphere, were nobody can see clearly.

Steinbeck also uses a comparison; at the beginning he compares George and Lennie to Candy and his dog. They are live partners; one of them takes care of the other. They are both friends who love each other and would do everything for his partner. Until now, that Candy accepted to kill his dog believing it would be the best thing to do. He didn’t even say good-bye. This might tell us that George will do the same with Lennie, maybe make a new friend, who knows.

How effectively has Steinbeck created tension during the incident with Candy's dog?. (2017, Oct 25). Retrieved from https://studymoose.com/how-effectively-has-steinbeck-created-tension-during-the-incident-with-candys-dog-essay 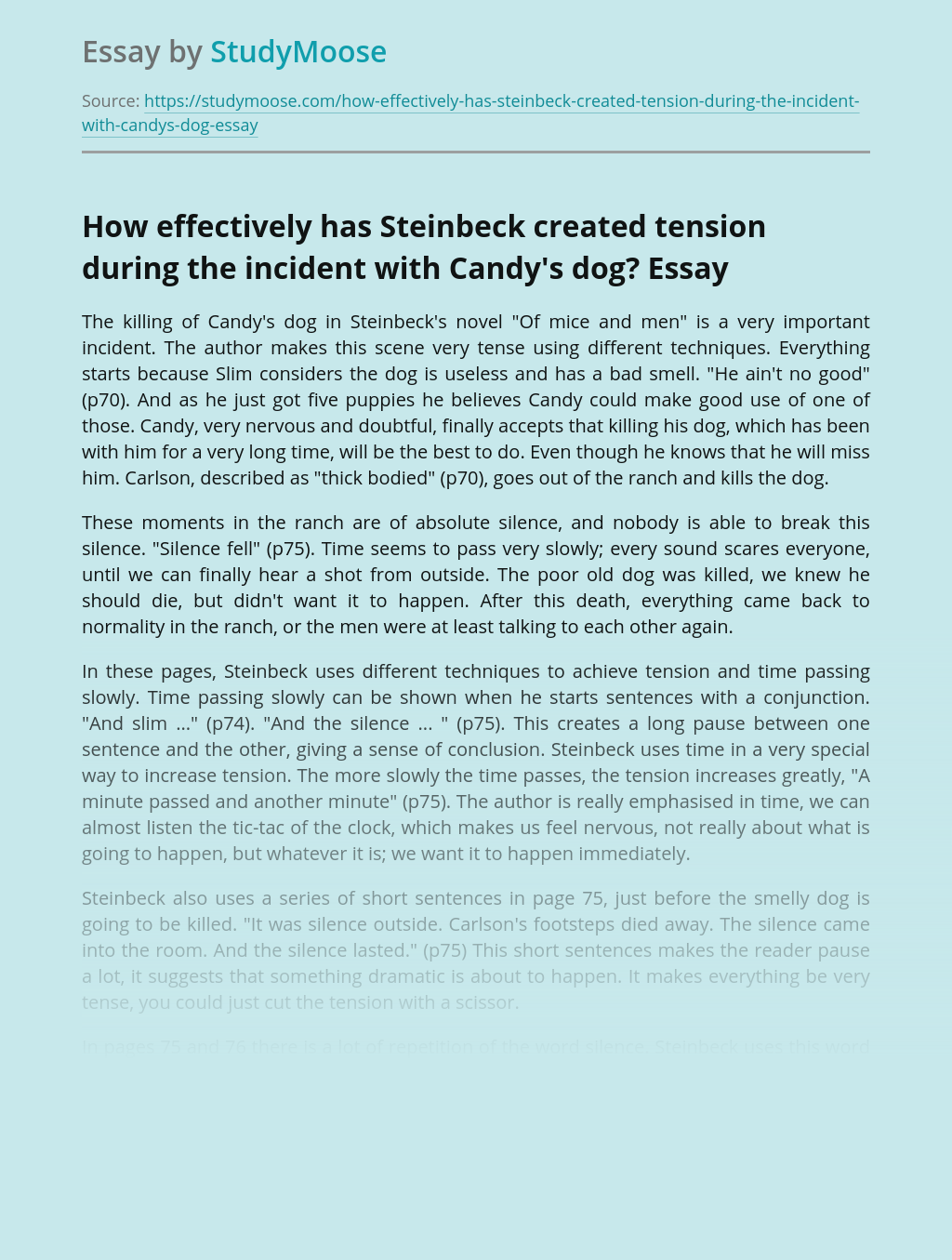 Turn in your highest-quality paper
Get a qualified writer to help you with
“ How effectively has Steinbeck created tension during the incident with Candy’s dog? ”
Get high-quality paper
Helping students since 2015
Stay Safe, Stay Original