This paper explores the research available on the history, nutritional guidelines, and health benefits of the Mediterranean diet (Mediet). A ranking in U.S. News (2014) has the Mediet as one of the top three best diets on a scale of short- and long-term weight loss, ease of following, nutrition, safety and performance as diabetes and heart diet. This paper examines these claims against the research available to gain a more in-depth understanding of the Mediet and its health benefits.

S. News & World Report, LP (U.S. News) released a ranking of the thirty-two best diets available today. “A panel of experts rated each diet on a scale of 1 to 5 on seven measures: short- and long-term weight loss, ease of following, nutrition, safety and performance as a diabetes and heart diet” (U.S. News, 2014). Listed among these diets are plenty of household brand names like South Beach, Jenny Craig, and Weight Watchers.

However, there are also many relative unknowns, especially at the very top of the list. One such diet that rates very highly in nearly every metric used in this ranking system, an aggregate score which places it as the third best diet overall, is a program known as the Mediterranean Diet (Mediet).

The overview by U.S. News (2014) contends that the Mediet can lead to weight loss as well as prevent cardiovascular disease, type-2 diabetes, and other chronic diseased based on a physically active lifestyle and adherence to a food pyramid “that emphasizes fruits, veggies, whole grains, beans, nuts, legumes, olive oil, and flavorful herbs and spices; eating fish and seafood at least a couple of times a week; enjoying poultry, eggs, cheese, and yogurt in moderation; and saving sweets and red meat for special occasions…with a splash of red wine”.

This paper investigates the claims made by U.S. News with nutritional research to get a better understanding of the history, dietary model, and overall health benefits of the Mediet.

(Willett et al., 1995)
The Mediet pyramid (MDP) was first introduced in 1993 at an international conference organized by Oldways Preservation & Exchange Trust (Oldways), the World Health Organization (WHO), and the Harvard School of Public Health (Oldways, 2008). This conference was organized to evaluate traditional dietary patterns around the world and to develop food pyramids that promote a healthy lifestyle. It was here that Willett et al. (1995) presented the MDP (shown above), so named because it was inspired by The Seven Countries Study by Ancel Keys in 1980 which discovered that certain populations in Crete, Greece, and Italy in the 1960s had the highest life expectancy rates combined with the lowest rates of chronic illness compared to the rest of the world.

This was especially surprising considering these people were fisherman and farmers who, at this time, were considered relatively poor and lacked easy access to medical services. Overall, though, the food requirements are generally the same as those listed by the 2014 U.S. News summary; plant foods (cereals, fruits, vegetables, legumes, tree nuts, seeds and olives), with olive oil as the principal source of added fat, along with high to moderate intakes of fish and seafood, moderate consumption of eggs, poultry and dairy products (cheese and yoghurt), low consumption of red meat, and wine in moderation is recommended during meals but can be avoided if it is considered to be a risk (Mayo Clinic, 2013). Sanchez et al. (2012) demonstrate that these foods contained within the MDP are “rich in nutrients such as vitamins, minerals, antioxidants, fibre [sic], omega-3 fatty acids (from fish), and monosaturated fatty acids (from olive oil), whose beneficial effects on health have been widely demonstrated”.

Where the MDP differentiates considerably from other food pyramids, though, is in serving sizes. Whereas the typical U.S. food pyramid lays out particular serving sizes for particular food groups, the Mediet is a more flexible, as Willett et al. (1995) elaborates here: The pyramid is meant to provide an overall impression of healthy food choices rather than to define recommended weights of certain foods or proportions of energy obtained from them. Where the pyramid does indicate relative frequencies, they are intentionally nonspecific because good health has been associated with considerable variation within the overall pattern. Also, the Mediet differs from other food pyramids in another distinct way; it includes physical activity and other lifestyle factors in the pyramid requirements. Willett et al. (1995) suggest that sharing delicious food with friends and family can lead to a relaxed state which provides a sense of community, encourages rest, and reduces stress.

(Bach-Faig et al., 2011) There have been numerous scientific studies since the introduction of the MDP that have established it as a model for good health. However, as time has passed along and technology has progressed, people have gotten further and further away from the traditional Mediet. “The traditional MD is now progressively eroding due to the widespread dissemination of the Western-type economy, urban and technology-driven culture, as well as the globalisation of food production and consumption, related to the homogenization of food behaviours in the modern era” (Bach-Faig et al., 2011). In response, Bach-Faig et al. (2011), on behalf of the Mediterranean Diet Foundation, have introduced an updated version of the MDP that was engineered to remain a relevant dietary program that is able to adapt to a changing world.

Much like the original, the new MDP has a plant-based foundation. “They provide key nutrients, fibre [sic] and protective substances that contribute to general well-being, satiety and the maintenance of a balanced diet, and thus should be consumed in high proportions and frequency” (Bach-Faig et al., 2011). Although, unlike the original MDP, this pyramid has included serving requirements that offers a clear guideline to follow while still leaving room for some variation as follows:

1. Cereals: one or two servings per meal in the form of bread, pasta, rice, couscous and others. Preferably whole grain.
2. Vegetables: two or more servings per meal. In order to ensure vitamin and mineral daily intakes.
3. Fruit: one or two servings per meal. In order to ensure a wide variety of antioxidants and protective compounds. Six to Eight glasses of water. Herbal infusions and tea, and low-sodium and low-fat broths may help to complete the requirements. Dairy products should be present in moderate amounts (two servings per daаy), important for bone and heart health but dairy products can be a major source of saturated fat Olive oil is located at the center of the pyramid; it should be the principal source of dietary fat because of its high nutritional quality.

Abundance of antioxidant compounds reported to be inversely associated with some cancers and is known to positively affect blood lipids and cardiovascular systems Olives, nuts and seeds are good sources of healthy lipids, proteins, vitamins, minerals and fiber. Spices, herbs, garlic and onions are a good way to introduce a variety of flavors and palatability to dishes and allow for a reduction in salt use, as salt is one of the main contributing factors to the development of hypertension. Good sources of micronutrients and antioxidant compounds. A moderate consumption of wine and other fermented beverages during meals (one glass per day for women and two glasses per day for men, as a generic reference)

Consumption of a variety of plant- and animal-origin proteins is recommended. Fish and shellfish (two or more servings), white meat (two servings) and eggs (two to four servings) are good sources of animal protein. Fish (especially those high in lipids) and shellfish consumption has been reported to reduce the risk of CHD and they have anti-inflammatory properties Consumption of red meat (less than two servings, preferably lean cuts) and processed meats (less than one serving) should be small in both quantity and frequency. Intake of such meats has been consistently associated with some chronic diseases. The combination of legumes (more than two servings) and cereals is a healthy plant protein and lipid source that should be considered as a meat alternative. Potatoes are also included on the weekly level (three or fewer servings per week, preferably fresh)

In the top vertex of the pyramid are the foods rich in sugars and unhealthy fats (sweets). Sugar, candies, pastries and beverages such as sweetened fruit juices and soft drinks should be consumed in small amounts and set aside for special occasions. These foods are energy dense and are likely to contribute to weight gain. Simple sugars, which are abundant in sweets, pastries, fruit juices and soft drinks, have been associated with an increased occurrence of tooth decay (Bach-Faig et al., Fig. 3, 2011)

Health benefits related to adherence to a Mediet are plentiful and wide-ranging. A three-year study by Mendez et al. (2006) found reduced incidence of obesity. However, according to Buckland, Bach, and Serra-Majem (2008) these studies are limited and conflicting but they did find that no studies reported a significant increase in obesity. Data analysis by Sofi et al. (2008) indicates that high levels of adherence to the Mediet correlate to reduced risk of death by cardiovascular disease, cancer, Parkinson’s disease, Alzheimer’s disease, and overall mortality rates. Another trial study by Eustruch et al. (2013) found that a Mediet with extra-virgin olive oil or nuts resulted in a 30% reduction in cardiovascular disease for high-risk participants.

A systematic review of clinical research by Esposito, Mairino, Ceriello, and Giugliano (2010) found that people who adhere to the Mediet see improvements in blood pressure, triglycerides, and cholesterol, all of which are cardiovascular risk factors. Also, this review found that Mediet adherence resulted in risk reduction for people with history of heart attacks and type-2 diabetes. A cognitive sub-study observed that high monosaturated diets, such as the Mediet, are linked to slower cognitive decline (Samieri et al., 2013). In addition, Martinez-Lapscina et al.’s (2013) randomized trial observed lower incidence of dementia. Meta-analysis shows a relationship between the Mediet and the central nervous system, inversely associated with stroke, cognitive impairment and depression (Psaltopoulou et al, 2013).

The Mediet is meant for sustaining health long term. Although the updated MDP has included guidelines for servings and recommended time intervals, the portion size is open to interpretation and can lead to an unintentional increase in caloric intake. This can lead to some weight gain, especially considering the high fat and carbohydrate content, but the physical activity mandated by the Mediet should at least help maintain weight control. Moreover, this diet could prove to be difficult for those used to the standard American diet where items such as fish, nuts, and oils are not as plentiful and are much more expensive. Therein lies the overwhelming obstacle in adhering to the Mediet. It is not a diet in the traditional sense; it is a new way of life. Even though the Mediet has proven to be effective in increased health and life expectancy, making a complete lifestyle change may be too much for many people.

In conclusion, there is no denying that the Mediterranean Diet is a healthy alternative that promises the ability to sustain a long, happy and healthy life. However, adherence to this way of life is highly time consuming and may be more expensive than one is used to. On the other hand, those costs more than likely would be far less than the possible healthcare costs associated with cardiovascular disease, diabetes, and/or any other chronic disease. It is important to research and weigh all of these factors when making a commitment to health. The guidelines set for by the Mediterranean diet can set someone on the right path to a better quality of life but there is no substitute for education and continued research. Then again, having a diet that tells you to drink wine is fun too. 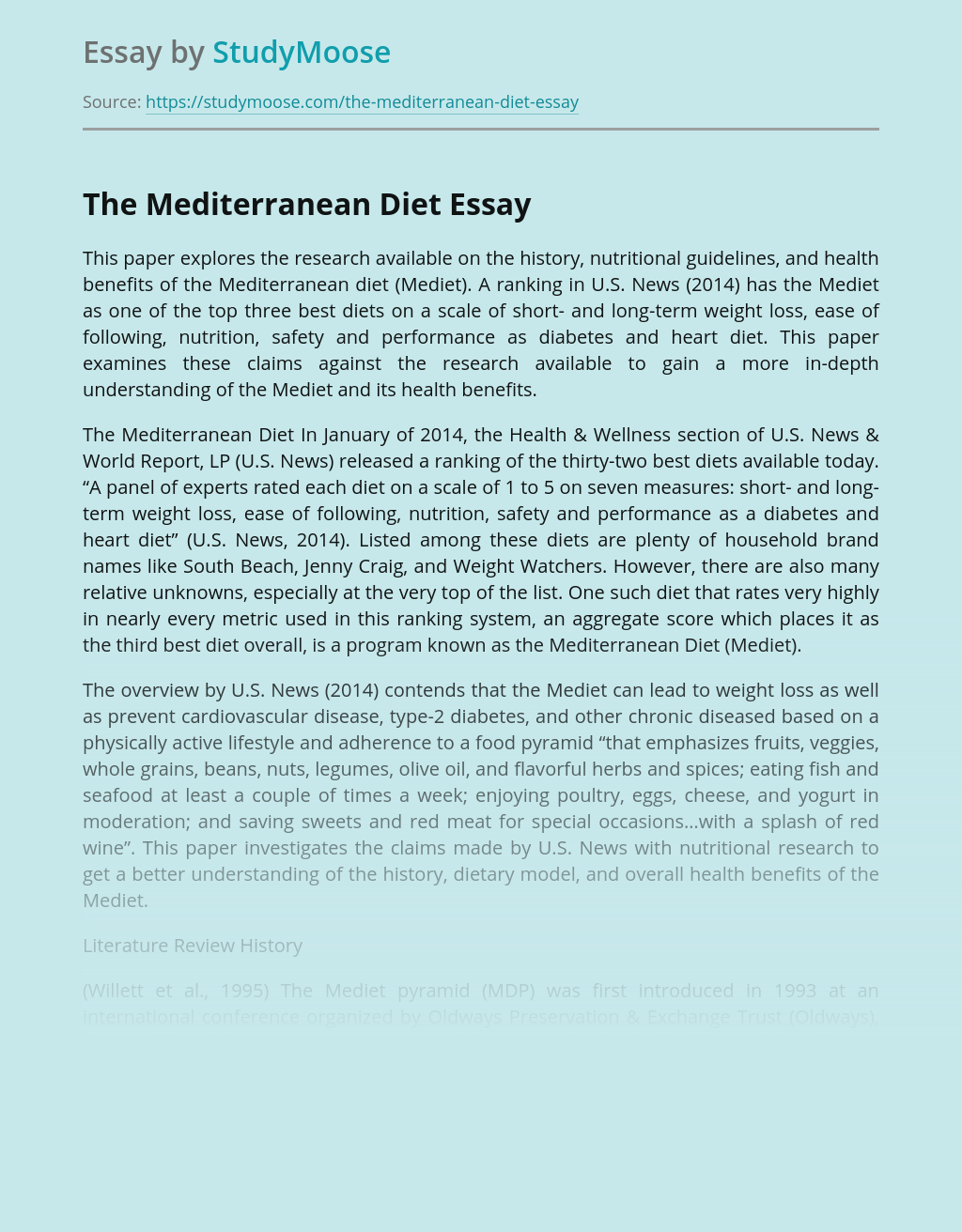 Don’t waste time
Get a verified writer to help you with The Mediterranean Diet
Hire verified writer
$35.80 for a 2-page paper
Stay Safe, Stay Original