In this play called “Macbeth, “Lady Macbeth is presented as a confident wife but throughout the play, Lady Macbeth slowly turns a manipulative and ambitious character. When she learns of the witch’s prophecy and that King Duncan shall come to the castle, she immediately seeks the perfect opportunity to murder king Duncan. However, despite her ambitious determination to remove her emotions and guilt, Lady Macbeth eventually suffers a mental breakdown due to her thought of crime, leading to her eventual death.

Don't use plagiarized sources. Get your custom essay on
“ The Manipulative Lady Macbeth ”
Get custom paper
NEW! smart matching with writer

When Lady Macbeth is first on the stage, she is reading a letter “Dearest partner in greatness” this describes Macbeth is very close and equal with Lady Macbeth but also cherishes his life with her but also lady Macbeth will be responsible for controlling Macbeth’s passions. When Macbeth says “ too full of the milk of human kindness “shows Macbeth’s characteristics are too soft and not enough of ambition to kill king Duncan, to accomplish the murder Macbeth would have to be enough ambitious and evil which he doesn’t and this is a surprise to the audience because at the start of the play Macbeth is presented as a brave and a good fighter in battle with no fears.

Lady Macbeth is evil like the witches “Come you spirits… unsex me here and fill me, from the crown to the toe-full of direst cruelty!” Lady Macbeth is summoning the spirits from hell to take her feminine characteristics and emotions out so that she wouldn’t feel empathy and doesn’t want to be treated fragile but also by that she wants to be like a man brave and cruel to kill but also Lady Macbeth is the reason Macbeth had the guts to kill king Duncan which Macbeth wouldn’t be able to be king without her.

Lady Macbeth was able to manipulate him because she knows him and has gotten into his head.

Lady Macbeth is a schemer and plans the murder completely on her own and tells Macbeth to “Look like the innocent flower but be the serpent under it” She is advising Macbeth on how to go about killing King Duncan. She encourages him to appear innocent and play the welcoming host to the king so that no one would suspect and would be a surprise and unseen murder so that no one would know his true intentions. King Duncan’s reference to Lady Macbeth as a “fair and noble hostess” which is dramatic irony because Lady Macbeth is only fooling him by pretending what she’s not. King Duncan has been fooled which is part of lady Macbeth’s plan to lead him in as he’s is already in the castle Lady Macbeth prepares the plan to cover up and wait for the right moment where Macbeth goes to kill. When lady Macbeth says “laid their daggers ready” the murder didn’t happen yet but has hidden the daggers where Macbeth will see but she would’ve killed kind Duncan herself, but her memory of her father has stopped her.

When Macbeth returns from the murder in a state of shock lady Macbeth sees Macbeth hasn’t put the daggers away “gild the faces” she would put the blame and Duncan’s blood on the servants and guards so that it seems they are guilty. Macbeth speaks way too much about him hearing someone crying “sleep no more” this tells me Macbeth will no longer have sleep and has gone against the chain of being, against the god who would pay the punishment. As later in the play Macbeth suddenly becomes king he realizes someone has found out, Banquo so Macbeth hired to kill Banquo but not himself but with murderers and at that point lady Macbeths and Macbeth’s relationship was falling apart “Be innocent of the knowledge, dearest chuck” indicates Macbeth is hiding his plans from lady Macbeth, this tells me they are no longer by each other’s side and aren’t equal as in the start of the play.

Lady Macbeth is very manipulative as shown when Macbeth says he no longer wishes to kill Duncan, she insults Macbeth “When you durst do it Then you were a man” she knows him very well and knows he needs her manipulation to success and that insulting him mentally and emotionally would be a big effect on him, she uses emotional blackmail “dash’d the brains out “if she could kill her own baby and sacrifice then he should too to succeed but also she does it to put guilt on him and to show she’s much braver than him.

Lady Macbeth also shows signs of humanity and this make her weak.at one point Lady Macbeth had herself in a sinister opportunity on killing King Duncan but she didn’t and that’s because he reminded her of her father when he was sleeping and just put a lot of memories in her head that she didn’t kill him. After the murder, it seems the murder and guilt haven’t got an effect on lady Macbeth as she says “A little water clears us of this deed” she took out her emotions that she doesn’t feel guilty but says to Macbeth to just wash your bloody hands but this changes where she sleepwalks and feels guilty trying to wash her hands because of the blood which symbolizes guilt and says “out, damned spot” she feels so guilty in the dark asking for protection and forgiveness from God but God would never forgive her for her sinister sins and at that point, she committed on her death at the end. 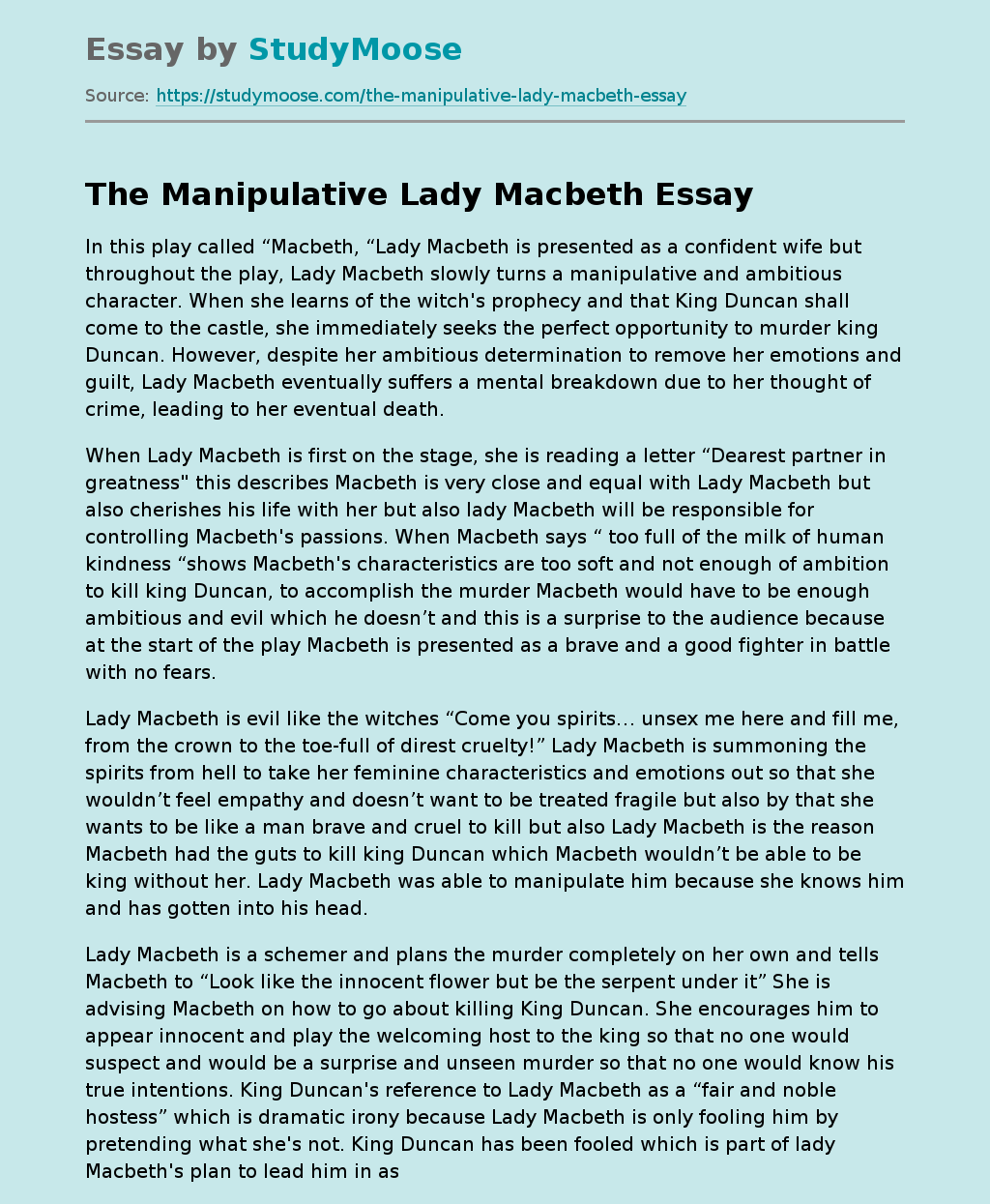