The Main Character of the Play The Crucible

One of the main characters of the play The Crucible, Abigail Williams, is the villain of the play, even more than Parris or Danforth. In Act One her skills at manipulation are very noticeable. John Proctor, who has dumped her after his wife found out about this sinful affair, “Abby, you’ll put it out of mind. I’ll not be comin’ for you no more.” Since she was also dismissed from her job at their house, Abigail becomes increasingly envious of Elizabeth.

Don't use plagiarized sources. Get your custom essay on
“ The Main Character of the Play The Crucible ”
Get custom paper
NEW! smart matching with writer

Abigail always has a different story from what actually happens and convinces people that her story is the truth.

One event that happens that displays this would be when Abigail was in the woods with the girls dancing and took it to the next level by drinking blood and taking off her clothing. Before the questioning of what happen in the woods Abigail states “Shut up! All of you. We danced. That is all, and mark this, if anyone breathe a word or the edge of a word about the other things, I will come to you in the black of some terrible night, and I will bring with me a pointy reckoning that will shudder you!” When she’s on the brink of getting busted for messing with witchcraft, she skillfully manages to pin the whole thing on Tituba and several of Salem’s other woman.

The horrible thing is that Abigail is the one who persuaded Tituba to go out and cast the spells. Ever since Abigail’s affair with John Proctor, she’s been out to get his wife, Elizabeth.

Abigail convinced Tituba to put a curse on Elizabeth, hoping to get rid of her and take her place at John’s side. It’s ironic that Abigail, who encouraged the witchcraft in the first place, is the one who goes around accusing everybody else. Abigail’s main skill seems to be finding people’s flaws, their weaknesses, and mercilessly manipulating them to her advantage. Act 2

In Act 2, Abigail Williams has thought over her encounter with Proctor for seven months. The more she thinks about the affair, the more Abigail convinces herself that Proctor loves her but cannot express his love because of Elizabeth. Abigail continues to think about her memories until they accurately portray her as the center of Proctor’s existence. Rather than seeing herself as a seventeen year-old who took advantage of a man’s loneliness and insecurity during his wife’s illness, Abigail sees herself as Proctor’s true love and his only choice for a wife. She believes she has only to eliminate Elizabeth so that she and Proctor can marry and fulfill her fantasy.

Throughout the play Abigail will tell things to people to make them think and make them believe what she says or make them do what she wants them to do. Most people look down at this quality but this is the way Abigail gets her way. Abigail has manipulated just about everyone in the town with the stories she tells. In the words of Abigail she states to the town “I want the light of God, I want the sweet love of Jesus! I danced for the Devil; I saw him, I wrote in his book; I go back to Jesus; I kiss His hand. I saw Sarah Good with the Devil! I saw Goody Osburn with the Devil! I saw Bridget Bishop with the Devil” When Abigail said this she was just trying to get out of punishment, she knew if she confessed of doing the devils work and state she wanted God she wouldn’t be charged as a witch.

The Main Character of the Play The Crucible. (2016, May 11). Retrieved from https://studymoose.com/the-main-character-of-the-play-the-crucible-essay 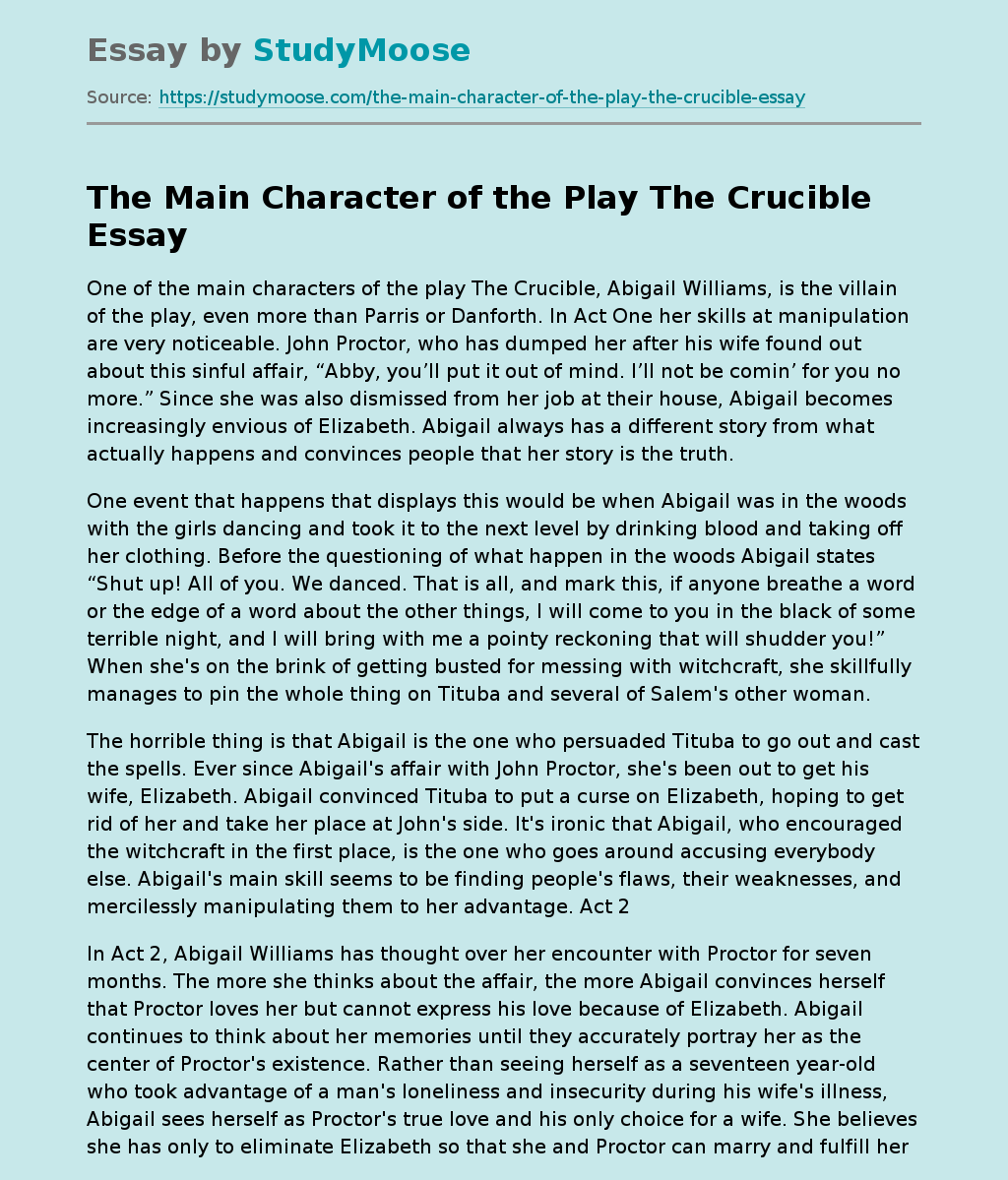