The Horror of Holocaust in "Night" by Elie Wiesel

The autobiography “Night” by Elie Wiesel is about mankind’s inhumanity to mankind and reveals how heartless humans can be out of fear and hate. Night deals with the events of the Holocaust and the effects through the eyes of Wiesel himself. In the book, a clear idea of these times are presented to the reader through the (at times) horrific story. The story is about more than that, it introduces the ideas of perseverance, strength, and will.

“Every Jew had to wear a yellow star” “The yellow star? So what? It’s not lethal” (Weisel 11) That was the first act of the nightmare that was about to begin.

Don't use plagiarized sources. Get your custom essay on
“ The Horror of Holocaust in “Night” by Elie Wiesel ”
Get custom paper
NEW! smart matching with writer

Most failed to realise that these yellow stars were for the purpose of discrimination, and the coming terrors. The Jews of Sighet had no idea what horrible things were to come after the yellow stars. It was only when Moishe the Beadle returned from being deported that they were given an idea of the coming future.

“Infants were tossed into the air and used as targets for machine guns” (Wiesel 6) Nobody deserves this, innocent babies never getting to experience life because of a hate that nobody could ever come to understand. As if that was not enough, that was just the beginning of something unbelievable. “The race toward death had begun” (Weisel 9).

The Jews were seen more as animals then human beings, the Nazis rounded them up like cattle and stuffed them into cattle cars. When the Jews traveled through other towns people would stare and laugh.

Some would throw food into the cars just to watch them fight for it like a starving stray dogs. “One day we had come to a stop, a worker took a piece of bread out of this bag and threw it into the wagon” “The worker watched the spectacle with great interest” (weisel 100). After being looked at as nothing but animals some jews even starting acting like animals. “Meir my little Meir don’t you recognize me, you’re killing your own father” (weisel 101) A man killed his own father without hesitation over a piece of bread that would not satisfy his hunger. We cannot blame him, it is not his fault for being starved, treated like an animal and being taught if you want to survive, you must only worry about yourself and do whatever it takes.

One of the worst thing the concentration camps did was made the Jews lose faith in their God. How could you put innocent people who worshiped their God through so much hell to the point where they start blaming God for everything they are going through. “Never shall I forget those moments that murdered my God my soul and turned my dreams into ashes” (wiesel 34) “he had created Auschwitz, Birkenau, Buina and so many other factories of death” (wiesel 67) Wiesel and so many other Jews lost faith in God, and questions how, if there is a God he would allow so many people, especially children to be killed. Imagine how cruel and inhuman you have to be to put people through so much traumatic experiences they lose their God.

It is sad what fear and hate and make people do, how curle they can become without hesitation. Sadly the Jews are not the only ones who went through this. The United States has a holocaust of its own that nobody talks about. Nobody talks about all the Native American people that were wiped out and sent to boarding schools. It is important to pay attention to history and how people act out of fear and anger so we can stop things like the holocaust from happening.

The Horror of Holocaust in "Night" by Elie Wiesel. (2021, Dec 02). Retrieved from https://studymoose.com/the-horror-of-holocaust-in-night-by-elie-wiesel-essay 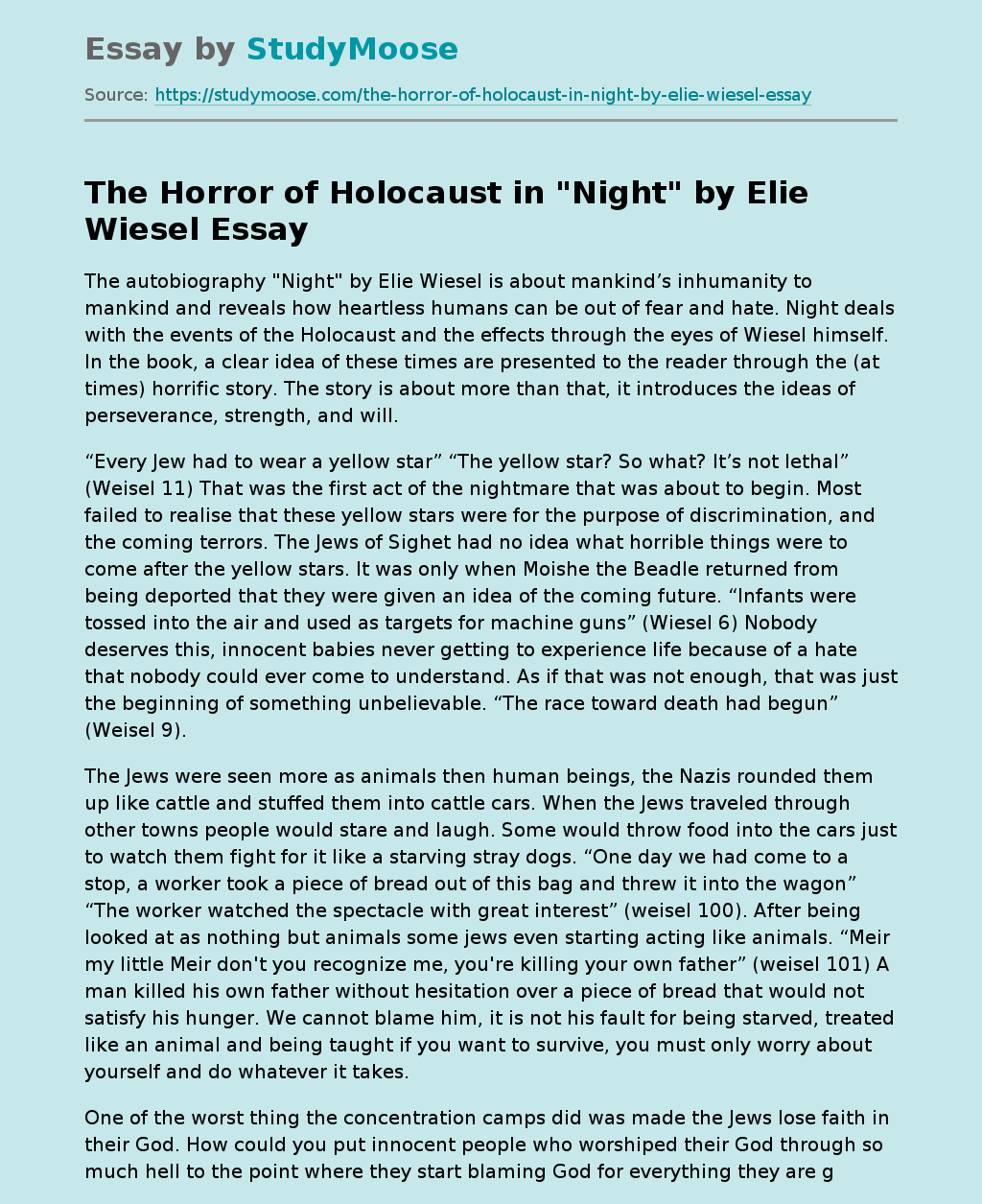