The History of Microbiology

Microbiology is the study of living microorganisms. The term micro means extremely small, and with regards to biology, this refers to minute living things that are individually too small to be seen without the aid of a microscope. These invisible microorganisms include bacteria, virus, fungi, protozoan and other microscopic organisms. The study of microorganisms is very important because it helps explains why people get sick and who or what is responsible for it. Prior to the development of microbiology, thousands (and sometimes millions) of people die in devastating epidemics as medical doctors stand helplessly at the side, fully ignorant of the reasons or causes of the disease.

Don't use plagiarized sources. Get your custom essay on
“ The History of Microbiology ”
Get custom paper
NEW! smart matching with writer

Most people believed that these diseases were sent as a punishment for sin. Moreover, people of the past were unable to control food spoilage. Fortunately, the discovery of microbiology provided answers to the problem of epidemics and diseases and gives rise to the discovery of medicines for treatment. Unlike before, entire families need not die because vaccinations and antibiotics are now available for protection against infection (Tortora et al, 1992, 5-6).

II. The Beginnings of Microbiology

However, it was only in 1665 that with the aid of a revised compound microscope, the first significant discovery relating to microbiology occurred. Robert Hooke, an Englishman, mounted a plant leaf in his revised microscope and consequently discovered life’s structural units that he called “little boxes” or “cells”.  This discovery led to the development of cell theory, the concept that “all living things are composed of cells” (Tortora et al., 1992,  6) Unfortunately, Hooke was not able to detect bacteria or viruses under his lenses.

B. Anton Van Leeuwenhoek, “The Father of Microbiology”

What Hooke misses, Anton Van Leeuwenhoek (Dutch merchant) discovered. Under his single-lens 300X magnification microscope, the world saw for the first time in the 1670 the microorganisms (he refereed to them then as “animalcules”) that ever since time began, co-exist with man. This “animalcules” are now presently called bacteria and protozoan. Leeuwenhoek’s   “invisible” microorganisms were taken from rainwater, liquid in which peppercorn had soaked and teeth scrapings (Tortora et al, 1992, 6; Cann 1998).

By the mid-1880, spontaneous generation, establishes itself as a popular scientific belief. Spontaneous generation proposed that    “life could arise spontaneously from nonliving matter” (Tortora et al, 1992, 6). In other words, there were people back then who advocated the idea that some living things originated from nonliving things.  For example, they believed that dead bodies can produce maggots (larvae of flies) or that frogs are a product of the moist soil (Tortora et al, 1992,  6). No matter how popular this idea may be in their time, the field of microbiology will soon disprove this.

When Leeuwenhoek discovered the “animalcules”, there was much interest as to where these microbes came from. Others speculated that these support the theory of spontaneous generation. However, in 1861, Louis Pasteur designed a series of experiments to prove that microorganism are indeed present in the air or in nonliving matter but that the microbes itself do not arise from air or the nonliving matter.  To prove this point, in one of his experiments, he boiled several short-necked flasks filled with beef broth. After boiling, he allowed the flask to cool for several days, with some of them he left   open while others were sealed. After some days, the opened flask had microbes while the sealed flask does not contain any microbes (Tortora et al, 1992,  7).

What was instrumental in establishing the relationship between microorganisms and disease was Pasteur’s investigation on why wine and beer turned sour.  Beverage spoilage had been long time problem of French merchants whenever they ship their beverages over long distances. In 1857, they approached Pasteur and instructed him to develop a method to prevent beverage spoilage. In a series of experiments, Pasteur discovered the key agent in fermentation; he found out that microorganisms called yeast convert the sugars in wine and beer into alcohol in the absence of air.  Souring and spoilage, on the other hand, are caused by a different microorganism called bacteria and happens only when in the presence of air bacteria change the alcohol in the beverage into vinegar. To solve the problem of souring, Pasteur introduced the process of pasteurization that involves heating the beer and wine just enough to kill most of the bacteria. Since then pasteurization had been used to kill harmful bacteria that are present also in milk (Tortora et al, 1992, 7).

The idea that yeast contributes to fermentation and that bacteria causes souring had led into the development of germ theory. Scientists are now coming into realization that in the same manner microbes can cause diseases in animals and people. In 1865, Pasteur discovered that a protozoan causes the silkworm disease (Tortora et al, 1992,  8).

It was a Robert Koch who first proved that bacteria indeed cause diseases. In 1876, Koch discovered that a rod-shaped bacteria (Bacillus anthracis), is responsible for the anthrax disease in cattle. Koch obtained   a sample of the bacteria, isolated some of it and others he cultured in nutrients and then injected them into the bodies of healthy animals. When these animals became sick and died, Koch obtained a sample of bacteria in their blood and compared it to the isolated original sample. He found out that both samples contained the same bacteria, therefore establishing the fact that a specific microbe causes a specific disease. In 1882, Koch made another significant contribution to microbiology when he discovered that Mycobacterium tuberculosis is responsible for the devastating tuberculosis disease (Tortora et al, 1992,  8).

In 1865, Joseph Lister, an English surgeon, put into practical use the germ theory when he attempted to control infections caused by microorganisms.   Lister was the first medical doctor to soak surgical dressings in a solution of carbolic acid (phenol) to kill bacteria thereby reducing the incidence of infections and deaths among his patients (Tortora et al, 1992, 10). In 1978, Edward Jenner (British physician), discovered the first vaccination technique. Jenner found out that   a person who had been previously sick of cowpox (a milder form of small pox) would not be afflicted with small pox, a disease that periodically killed thousands of people in Europe.  Jenner discovered this when he scratched a healthy volunteer with a  scrapings from cowpox blisters.  The volunteer got sick, recovered and never contracted again either a cowpox or small pox disease. Pasteur explained that vaccination occurs because some bacteria loses its ability to produce a disease in the previously afflicted person, that is,  the person becomes immune to the disease  because the body now  contains  antigens to  fight against the bacteria (Tortora et al, 1992, 10).

Alexander Fleming (Scottish physician) accidentally discovered antibiotics in 1928. Fleming’s was almost ready to discard his cultured plate contaminated with mold when he observed that in an area beyond the mold the bacteria were unable to spread itself.  He identified this mold as Penicillium notatum or penicillin, an antibiotic produced by a fungus (Tortora et al, 1992,  10).

After the discovery of vaccination by Jenner in 1798, many studies had been done concerning the role of the immune system to fight diseases. Since then other vaccines were developed to prevent the occurrence of    measles, mumps, polio, rubella and hepatitis B (Tortora et al, 1992,  11).

Modern virology extends from the golden age of microbiology. In 1892, Dmitri Iwanowski discovered that the microbe that caused mosaic disease of tobacco was smaller than bacteria. In 1935, Wendell Stanley identified this microbe as a virus. Since then, scientist had been actively observing the structure and chemistry of viruses that caused many diseases (Tortora et al, 1992,  11).

The study of trait transfer was made easier through experiments with bacteria. Until the 1930’s all genetic research had been based on the study of plant and animal cells, but in the 1940’s scientists shifted to a less complex  unicellular  organisms  (bacteria) to  study  genetic and biomedical  research. Upon observation of the bacteria, by 1944, Oswald Avery, Colin McLeod and Maclyn McCarty were able to firmly establish   DNA as the hereditary material (Tortora et al, 1992, 11).

Microbiology is very important especially concerning its contribution to the maintenance and improvement of human health. The study of microbiology led to the knowledge on why people get sick and how to treat them. The prominent pioneers of microbiology are Anton Van Leeuwenhoek, Louis Pasteur, Robert Koch, Edward Jenner and Alexander Fleming.

The History of Microbiology. (2016, Sep 22). Retrieved from https://studymoose.com/the-history-of-microbiology-essay 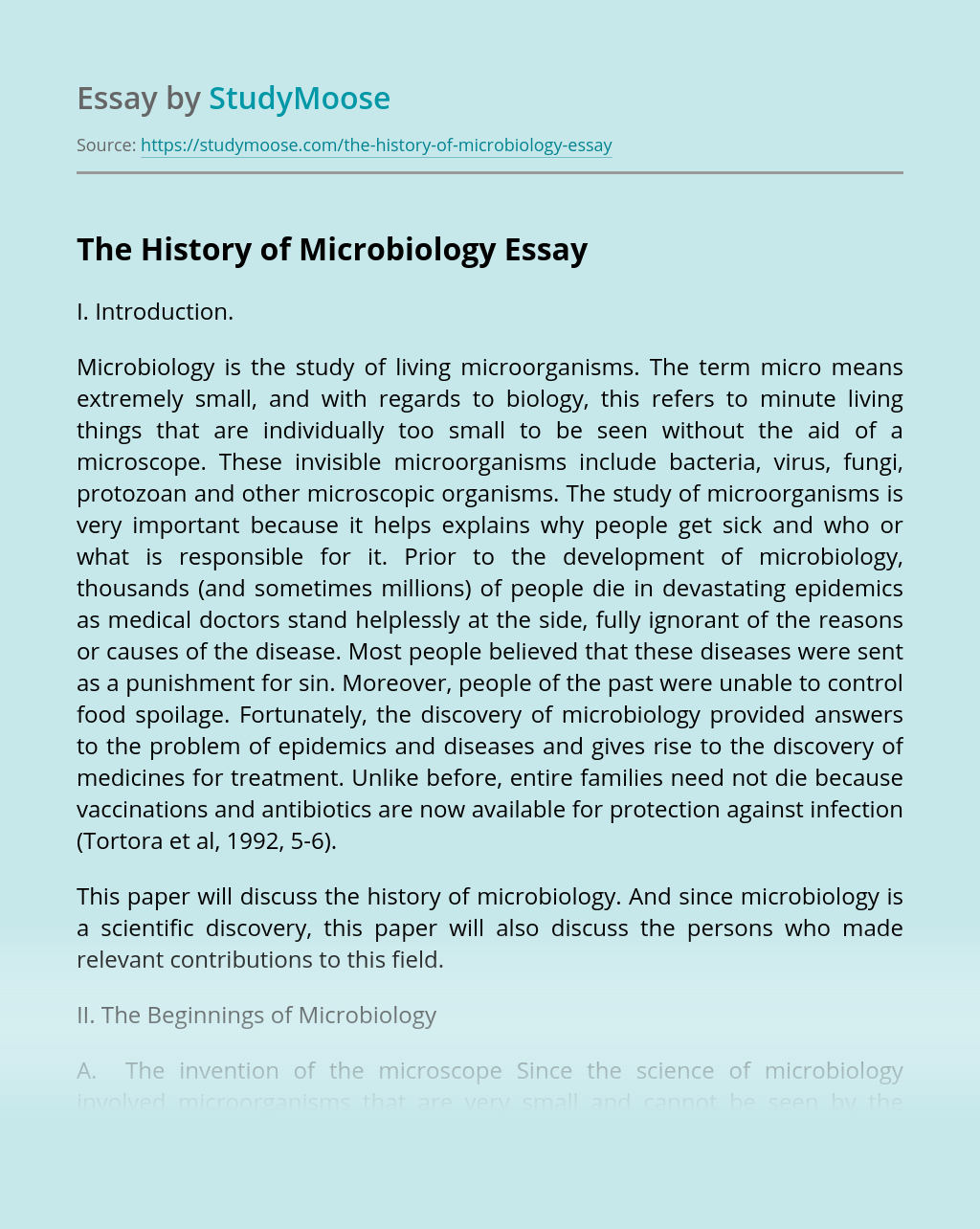