In F. Scott Fitzgerald’s novel, The Great Gatsby, a man named Nick Carraway is the narrator. He gets mixed up in all sorts of shenanigans with Jay Gatsby , Nick’s rich and successful, war veteran of a neighbor. Gatsby wanted Nick’s help to get Daisy to marry him, even though she’s already married. Although that does not stop Gatsby as he tries having her over at his house to show how rich he is, hosts parties to show how popular he is, and many more things.

Don't use plagiarized sources. Get your custom essay on
“ “The Great Gatsby” Literary Analysis ”
Get custom paper
NEW! smart matching with writer

It was harder to be rich and successful back then, which made it more admirable when someone did achieve it. Although it can be admirable, the novel suggests that the desire for wealth and status impacts people negatively. This can be seen when analyzing Myrtle, Daisy, and Gatsby.

Myrtle is affected negatively by wanting a good social status and wealth. The reasoning behind this claim is that she is cheating on her poor husband with Tom who is a rich, muscular man who is not afraid to beat her.

When her husband wises up to her cheating, he attempts to move with her far away from the town where they currently live. When he does that though, she runs out into traffic. A car she thinks is Tom’s car runs her over. “A moment later she rushed out into the dusk, waving her hands and shouting; before he could move from the door the business was over,” (Fitzgerald 148). She was planning on leaving her husband for Tom because he was rich and bought things for her.

Not much is said about Myrtle’s character. Her description is based on her looks. This shows that there is little to note about her personality. Tom seemed to genuinely appreciate her company, however, that doesn’t say much because Tom is a man of little depth and many mistresses. She was disappointed in the way her life and her husband turned out. Myrtle seemed to be a fool but she could have been desperate. She wanted more, so she began to use Tom as a stepping stool toward the rich and popular lifestyle she had always wanted. She even died because of her lust for wealth and popularity. Myrtle’s husband loved her enough to avenge her death, even though she was cheating on him to fulfill her greedy desires. This is how she was impacted negatively by the desire for wealth and a good social status.

Daisy, the majestic voiced and dark, shining haired “golden girl”, is another example of an influential person who was impacted badly by aspiring to get riches and better social status.She was raised in a semi-wealthy family in Louisville, Kentucky. She had always been a well-liked person. She wanted to marry Jay Gatsby but he went off to war. She said she’d wait for him but as the time passed she grew impatient and wound up marrying Tom, the rich and self righteous racist. After marrying Tom, she and him moved around a lot, like from Kentucky to Chicago, to paris, and eventually settling in Long Island. Gatsby ended up coming back and started harassing Daisy to divorce her husband and marry him. This leads to her being stressed out and accidentally killing a person running in the streets. “She began to sob helplessly. ‘I did love him onceㅡbut I loved you too.’ Gatsby’s eyes opened and closed. ‘You love me too?’ he repeated. ‘Even that’s a lie,’ said Tom savagely. ‘She didn’t even know you were alive,’ … The words seemed to physically bite into Gatsby,” (Fitzgerald 140). This shows that Daisy’s pursuit for wealth and a high social status affected her badly. Daisy doesn’t know who she is. She is scared to see what life would be like without her financial security that she’s always had. In truth, she might have thought of a life with Gatsby, but she never intended on leaving Tom. Despite the fact that Tom was cheating on Daisy, and she knew this, she was still stubborn, and afraid enough to stay with Tom. Daisy forgot about Gatsby a long time ago, and the thought of adventure was the only thing that tempted her to think about leaving Tom for Gatsby.

Gatsby, born James Gatz, was of mystery and superficial riches, was also impacted in a bad way by wealth and social status. He was tan skinned and short haired. He had ditched his parents because they were poor and as soon as a rich person offered him a job he took it, ultimately changing his name to Jay Gatsby to distance himself from his poor past. While working for Cody, his rich employer, they became close, close enough to inherit Cody’s small fortune. When Cody died, gatsby was in fact originally supposed to get the money, but due to his lack of knowledge of the legal system, he lost all of it to Cody’s mistress. This left him back at square one. Military seemed like the best option at the time to get where he wanted to go in life, this is also where he met Daisy. Gatsby had an automatic attraction to Daisy, he knew he wanted to marry her no matter the cost. After he left for Paris, Gatsby vowed to become rich so Daisy would be able to marry him. She eventually forgot about him and was pressured to marrying Tom, this was another motivator to become rich. After many purchases and deals Gatsby had enough money to buy a house near Daisy. Gatsby was such a calculated and patient man, he ended up throwing tons of loud and bright parties just in the hopes that his object of obsession, Daisy, would show up. He had ditched his poor parents for the military where he met Daisy. Once he left he went off to find her, even though she was already married, he had hoped that she would fall for his riches. She did end up somewhat falling for him again, but Tom finds out that Gatsby is a bootlegger, to which Gatsby tries to deny. Daisy decided she had had enough with Gatsby and left town with her husband, mostly because of the person she had ran over. “I began to have a feeling of defiance, of scornful solidarity between Gatsby and me against them all,”(Fitzgerald 173). This shows how alone Gatsby was. He was prideful, some may even say disgusted by poverty. His obsessive personality caused him to change his whole life for a girl he never had a chance with, maybe he did, once, but life had changed them. He charmed and lied his way through life. Perhaps Nick was the only one thoughtful enough to take the time to see who he was. The fact that he had spent most of his life trying to gain riches and isolating himself from poor people like his parents, left him utterly alone. The only people who showed up to his funeral were the Owl Eyed man, the guy who was in Gatsby’s library, a few servants, and Nick Carraway, the narrator of the book and center of most of the happenings in the book. Gatsby’s father, Henry C. Gatz, also showed up at the funeral, despite Gatsby shunning him all his life for being poor. Also he came all the way from where he lived, which is Minnesota, just to go to the funeral of a son he barely knew, even though Gatsby was mean to him.

All of this shows that chasing wealth or social status has a negative impact on people. Myrtle was ran over because she wanted to leave with Tom, but died trying. Daisy accidentally killed Myrtle because she married Tom because he was rich and he and Gatsby argued to the point of her being so stressed, it caused her to not be able to focus while driving. Gatsby, though, was alone because of what he did to get his wealth and social status. He left Daisy to go into the military and get a good social status, and he sold illegal alcohol to get money, which pushed any friends he may have had away. If Gatsby had invested time into hanging out with his parents, he wouldn’t have been so lonely. Sometimes people can get so obsessed with what they can’t have that they don’t appreciate what’s in front of them. Judging by his funeral, there were some people who might have been open to the idea of getting to know Gatsby. In the end, they were all affected in and unfavorable and unforgettable way by taking the immoral advances to gaining wealth and social status. Seeking security would have been acceptable for these characters, had it not consumed their lives. It begs the question, what lives have been lost. All of these characters could have made a difference in their small part of the world if they had been content with their lives. 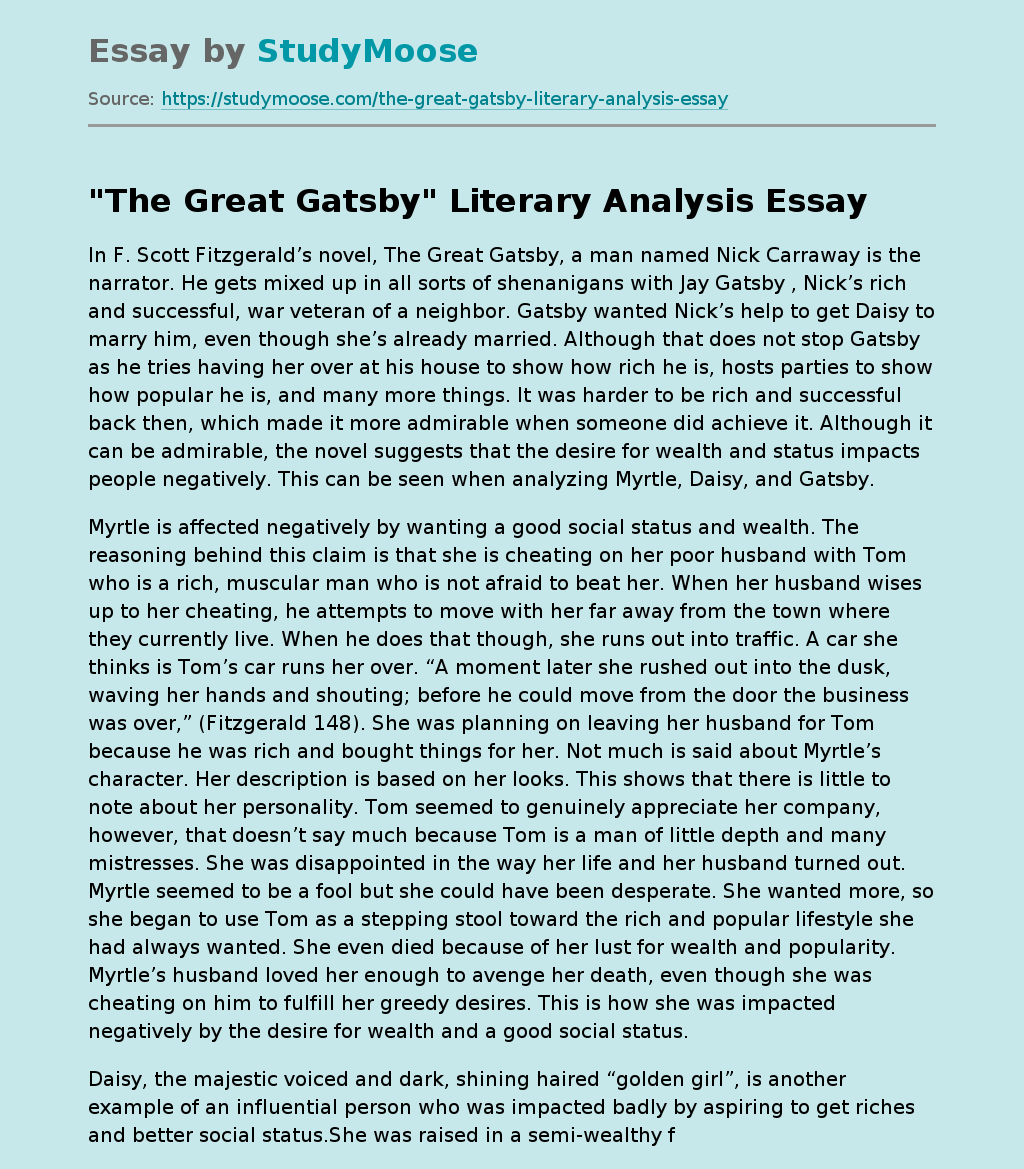