The Great Gatsby and Modernism

Modernism is a period in literary history which started around the early 1900s and continued until the early 1940s. Modernist writers in general stood against typical storytelling and ordinary verse from the 19th century. Instead, many of them told stories the way they seen it in a state of society during and after World War I. “Modernist literature is characterized chiefly by a rejection of 19th-century traditions and of their consensus between author and reader”- Chris Baldick. In all, modernism is a rejection of tradition and a hostile attitude toward the past.

In The Great Gatsby it is a first person narrator. Vision and viewpoint became an essential aspect of the modernist novel as well the way the story was told became as important as the story itself.” (Kathryn VanSpanckeren, 2003). Nick Carraway is not very reliable. He fails to remember some parts of the story, because he was too drunk to remember. “I have been drunk just twice in my life and the second time was that afternoon, so everything that happened has a dim hazy cast over it although until after eight o’clock the apartment was full of cheerful sun” (p.

At the end of Chapter II he wakes up beside Mr. McKee, who is in his underwear, looking at pictures, and wondering what just happened. His narration isn’t complete, because he remembers only parts of that night. And because Nick is the narrator of the story, we only know what he lets us know about Gatsby and when he wants to tell us.

Because of that, the story is told in fragments, there is not really a chronological order. What also makes the novel a modernist novel is the symbol of Dr. T.J. Eckleberg eyes and what it represents. In modernism God is dead and people are looking for something else to replace Him. In the novel, Dr. T. J. Eckleburg is actually a billboard that represents God. Times were changing and God was not, people’s main concern in life anymore. Dr. Eckleburg’s billboard showed that America had a lack of morals and faith in God in the 1920s.

The Great Gatsby is also a modernist novel because of its major theme, the loss of American dream. Almost everyone in the novel was most concerned with obtaining material possessions, having affairs, attending wild parties constantly and becoming drunk. An example would be Gatsby. Most of his adult life he was willing to do anything to gain the social position he thought necessary to win Daisy, but he failed. To sum it up, Gatsby was living the American dream but is ruined by his love for Daisy. In all, each character represented some sense of modernism. Nick was a loner with no one he could really relate too. Jordan was cynical and did anything to win. Gatsby was an optimistic and powerful but was weak when came to Daisy. Tom was arrogant racist, sexist and a bully. Daisy was cynical and skeptical.

The Great Gatsby and Modernism. (2017, Jan 08). Retrieved from http://studymoose.com/the-great-gatsby-and-modernism-essay 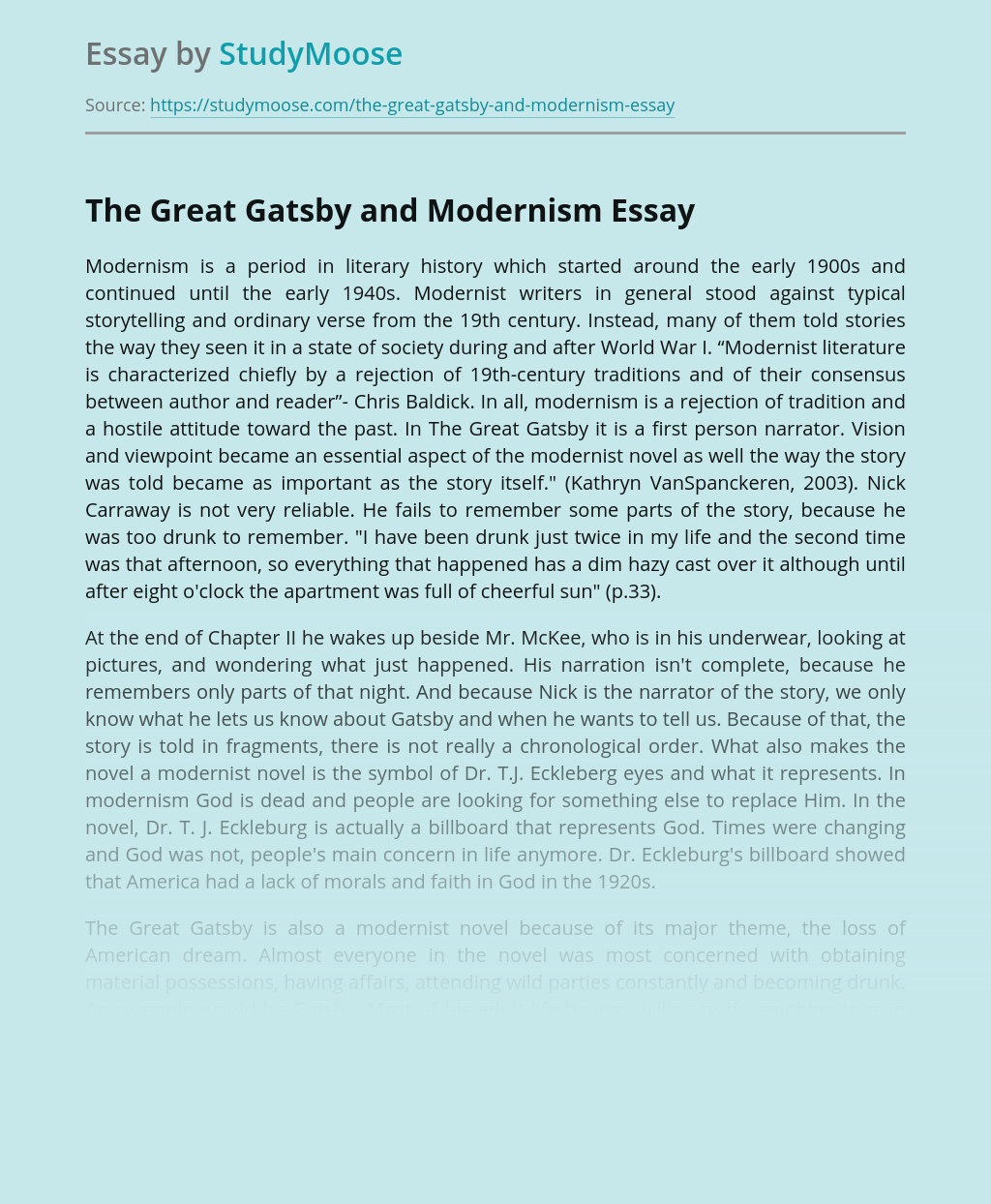 Don’t waste time
Get a verified writer to help you with The Great Gatsby and Modernism
Hire verified writer
$35.80 for a 2-page paper
Stay Safe, Stay Original