The Great Depression in to Kill a Mockingbird

On September 1929, Andrew Mellon declared, “There is no cause to worry. The high tide of prosperity will continue.” It made the people wonder, “Is this true?” The people of Maycomb County, Alabama, had a long way to recovery. Many are dirt poor, and others were pulled down along with them. During the depression period, “nickels and dimes were hard to come by.” (27) Shops closed down because of the decline in economy. Scout (the protagonist in To Kill a Mockigbird) mentioned, “There was no hurry, for there was nowhere to go, nothing to buy and no money to buy it with, nothing outside the boundaries of Maycomb County.

Don't use plagiarized sources. Get your custom essay on
“ The Great Depression in to Kill a Mockingbird ”
Get custom paper
NEW! smart matching with writer

”(6) All of Maycomb was affected in one way or another by The Great Depression.

Of all of the people that were impacted, the farmers were influenced the most. Atticus clarified to Scout once before that “He (Walter) had probably never seen three quarters together at the same time.” (25) Farming was the only way that they could live.

During the depression, people kept their money to themselves and did not spend much on the agriculturalists’ products. If nobody bought the food, the farmers could not get any money. Therefore, the amount of money received by the farmers deteriorated. Atticus explained to Scout, “The Cunninghams are country folks, farmers, and the crash hit them hardest.” (27) Since the farmers were poor, professionally employed businessmen, such as doctors, dentists, and lawyers, were poor as well.

”(27) The farmers were the professionals’ main customers. Since the agriculturalists didn’t have money to pay for the service, the companies plummeted in terms of money. “As the Cunninghams had no money to pay a lawyer, they simply paid us with what they had.” (28) This was one way poor farmers could pay for the professional service. Apparently, Dr. Reynolds worked the same way. He would not have asked for their money, but for what they had had at hand. (28) Mr. Cunningham could have gotten a WPA job (Works Progress Administrations Job), but he wanted to “keep his land and vote as he pleased” (27-28). The Great Depression left many citizens of America in poverty and most unfortunately, starvation. “Walter Cunningham’s face told us that he had hookworms. His absence of shoes told us how he got them.”

(25) Mr. Bob Ewell was excused from a rule because his children were starving from poverty. The rule was about hunting out of season; in Maycomb County, hunting out of season was forbidden. (41) As seen, the Great Depression had impacted Maycomb County severely. The Great Depression had a large impact in Maycomb County, Alabama in To Kill a Mockingbird. Many people lost jobs and were dragged down to the poverty line. Some, such as farmers, were dirt poor. Food was scarce on tables. Children and adults alike died from starvation. Many crimes were committed during that time because of the need for money. Harper Lee clearly defines what the Great Depression was really like for all Americans during the unpleasant time period through her impressive piece of literature.

The Great Depression in to Kill a Mockingbird. (2016, Mar 18). Retrieved from https://studymoose.com/the-great-depression-in-to-kill-a-mockingbird-essay 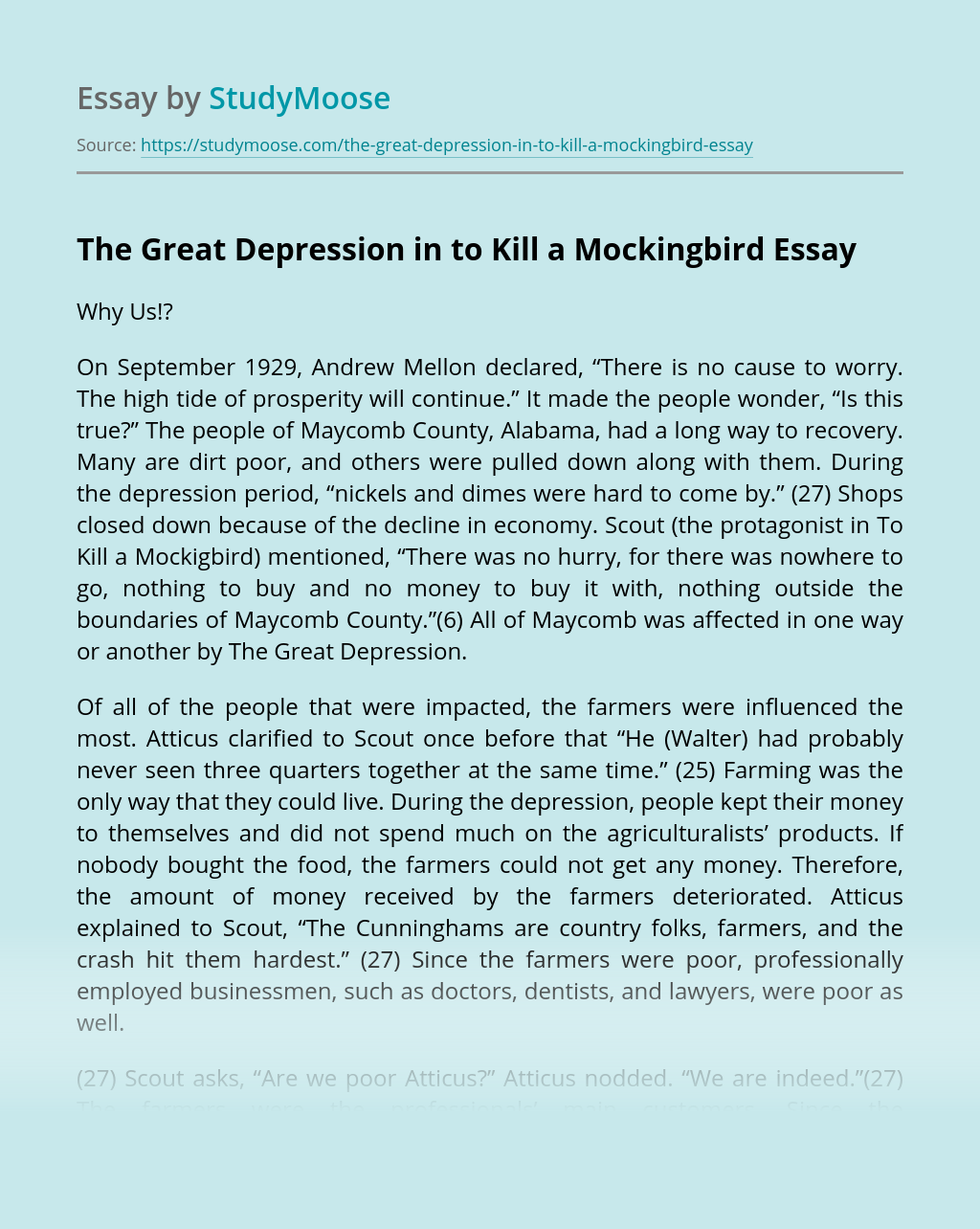