The executive branch of the U.S. goverment

“Using specific examples discuss how Madison’s observations in Federalist Paper 51 apply to the relationship between the legislative branch and the modern president.”

In order to keep the government from becoming too powerful and endangering the liberty of its people, the framers of the United States’ Constitution endorsed the implementation of separation of powers so that the different branches of the government would keep one another in check. In Federalist Paper 51, Madison focused on the crucial relationship between the legislative and executive branches with the use of separation of powers.

Don't use plagiarized sources. Get your custom essay on
“ The executive branch of the U.S. goverment ”
Get custom paper
NEW! smart matching with writer

He stated, “In the republican government the legislative authority, necessarily, predominates. The remedy for this inconvenience is, to divide the legislative into different branches…[and] the weakness of the executive may require, on the other hand, that it should be fortified.”

While the separation of powers has successfully protected the liberty of America’s people, it has also caused a continual struggle between the executive and legislative branch to gain power over matters such as the economy, the right to pass legislation, and control over the military.

Due to the prevalence of the legislative power severely limiting the authority of the executive, there is a large imbalance between the demands and expectations pressing in upon the President and his capacity to respond to them. The president cannot get his policies adopted by Congress without long delays and much bargaining. However, some fortification of the executive branch has allowed the president overcome some of these limitations in performing roles such as commander in chief, chief diplomat, and chief legislator.

The president holds the most authority as commander in chief than in any other role. While the Congress has the sole power to declare war, the president can send armed forces into a country in situations that are the equivalent of war. Numerous presidents in the history of America have exercised this right. McKinley sent troops to Peking after the Boxer Rebellion, while Truman dispatched troops to Korea to take police action. Kennedy, Johnson, and Nixon had an entire war in Southeast Asia without Congress’ approval. In 1973, however, Congress attempted to get some of
their military decision-making ability back.

By passing the War Powers Act, Congress spelled out the conditions under which the president can dispatch troops without the approval of Congress. If he chooses to send troops, the president must report to Congress within forty-eight hours. Then Congress has the right to pass a declaration of war within sixty days, extend the sixty-day time limit, or withdraw the troops. In 1983, President Reagan tested the War Powers Act when he wanted troops to remain in Lebanon. Congress would only allow him a limited number of troops to stay in the dangerous area. In spite of the War Powers Act, the powers of the president as commander in chief are more extensive today than they were in the past.

As chief diplomat the president is granted several powers in dealing with foreign countries and other heads of state that do not require the consent of Congress. The recognition power, which allows the president to recognize, or refuse to recognize, a foreign government, is an important power of the president. In modern times, the simple act of receiving a foreign diplomat has been equivalent to accrediting the diplomat and officially recognizing his or her government. Such recognition is a preliminary step in achieving diplomatic relations or negotiations with another country. The United States, for example, did not recognize the Soviet Union until 1933, sixteen years after the Russian Revolution of 1917. The president’s power as chief diplomat is enhanced greatly by the use of executive agreements also.

These agreements made between the president and other heads of state do not require Senate approval because the president cannot go back on his word. The advantages of executive agreements instead of a treaty are speed and secrecy, which are extremely important in some situations. Unlike a treaty however, executive agreements are binding only during the administrating that initiates it, unless approved by the new president’s consent. Despite its lack of interference in approving the agreements, the Senate can refuse to appropriate the funds necessary in implementing them. Franklin Roosevelt used executive agreements to bypass congressional isolationists in trading American destroyers for British Caribbean naval bases and in arranging diplomatic and military affairs with Canada and Latin American nations.

As chief legislator, the president can propose legislation; however, the Congress must review them and is not required to pass any of the administration’s bills. To overcome this obstacle the president must have the ability to argue and persuade. According to Richard E. Neustadt, governing rests in the act of persuasion not commands. The president needs to induce them to believe that what he wants of them is what their own appraisal of their own responsibilities requires them to do in their interests. On the other hand, the president must sign all bills accepted by Congress to become a law. If he does not want to make the bill a law, the president has the power to return the unsigned bill to the legislator, in what is called a veto. If the president does send the bill back, Congress can change the bill hoping the president will pass it the next time; otherwise, the Congress can override the president’s veto with a two-thirds vote in both houses.

If the executive refuses to sign a bill and Congress adjourns within ten working days, the bill is stalled and must be reintroduced next session, in what is known as a pocket veto. Ronald Reagan lobbied for the line-item veto, which would allow a president to veto only specific sections of a bill. In 1996, the line-item veto was passed by Congress and signed by President Clinton. The law grants the president the power to rescind any item in an appropriations bill unless Congress passes a “disapproval bill, which could be vetoed itself. The veto is a very powerful weapon that helps the executive control legislation and in turn gives the president more authority in making critical decisions.

The president is also granted a variety of special powers and privileges not available to the other branches of the U.S. government, which help to fortify the executive. One of these powers is the President’s ability to use emergency powers. Emergency power is an inherent capability exercised by the president during a period of national crisis, especially pertaining to foreign predicaments, which allows him to make crucial decisions without the approval of Congress. Presidents have used emergency powers since the formation of the United States.

For example, President Lincoln suspended the liberties of all citizens at the beginning of the Civil War and called the militia into national service. However, it was not until 1936, when the Supreme Court ruled in favor of Roosevelt in United States v. Curtis-Wright Export Corporation, allowing the president to order an embargo on the shipment of weapons to two warring South American countries without the consent of Congress, that the executives have been able to initiate emergency powers formally. The right of an executive to use emergency powers has greatly strengthened the position of the president.

An executive order is a rule or regulation issued by the president that has the equivalent effect that a law has. These orders can implement treaties, statutes, and provisions in the Constitution. This authority given to the president represents the executive’s legislative power. The Administrative Procedure Act of 1946 places a single requirement on executive orders; the president must publish the order in the Federal Register. Executive orders have been used in the past to implement national affirmative action regulations, to establish procedures for appointing administrators, to ration consumer goods, and to regulate the export of particular goods. Executive orders give the president the ability to act as a law making body, once again strengthening his position.

All presidents have the right of executive privilege, which allows him to refuse to appear before, or withhold information from, the judicial system or Congress. Opponents believe that this privilege only allows the president to hide information from Congress and the American people. In the United States’ history, the boundaries of executive privilege have only been tested once. During the Watergate Scandal, Nixon claimed, “No president could function if the private papers of his office, prepared by his personal staff, were open to public scrutiny.” In 1974, the Supreme Court ordered Nixon to give all of the tapes of his conversations in the Oval Office to the courts upon their unanimous ruling in United States v. Nixon. Executive privilege helps shield the president from the other two branches of government, giving the modern president even more power.

By law, when a president enters office he proposes a budget and the Congress approves it. However, it is not stated clearly that he must spend all of it. Often times the executive chooses not to use all the money congress provides; this is referred to as the impoundment of funds. Jefferson, Grant, Hoover, and Roosevelt all deferred money. Truman did not spend as much money on the military as Congress granted, while Kennedy refused to put money into weapons systems. The Budget and Impoundment Control Act of 1974 changed all this. It came in response to President Nixon’s refusal to spend funds allotted to him by Congress and was passed over Nixon’s veto.

The law required the executive to spend all money appropriated by Congress with few exceptions. Among the exceptions were if the president did not want to spend the funds, he must notify Congress. However, Congress can override the president if they do not give him consent to withhold the funds within forty-five days. The Budget and Impoundment Control Act puts the executive at a disadvantage, allowing the legislative branch a little control.

Despite the restraints put on the power of the executive branch by the separation of powers and the predomination of the legislative branch, the president has successfully surmounted many limitations by bestowing special rights upon the executive. These privileges have increased the power of the president while enabling him to make decision and take action more successfully and efficiently. In the past 60 years, however, the executive branch has gained an extraordinary amount of power, almost allowing the position to rival the authority in all of Congress. However, it is extremely necessary to have a strong executive in the United States.

The executive branch of the U.S. goverment. (2016, Jun 22). Retrieved from http://studymoose.com/the-executive-branch-of-the-u-s-goverment-essay 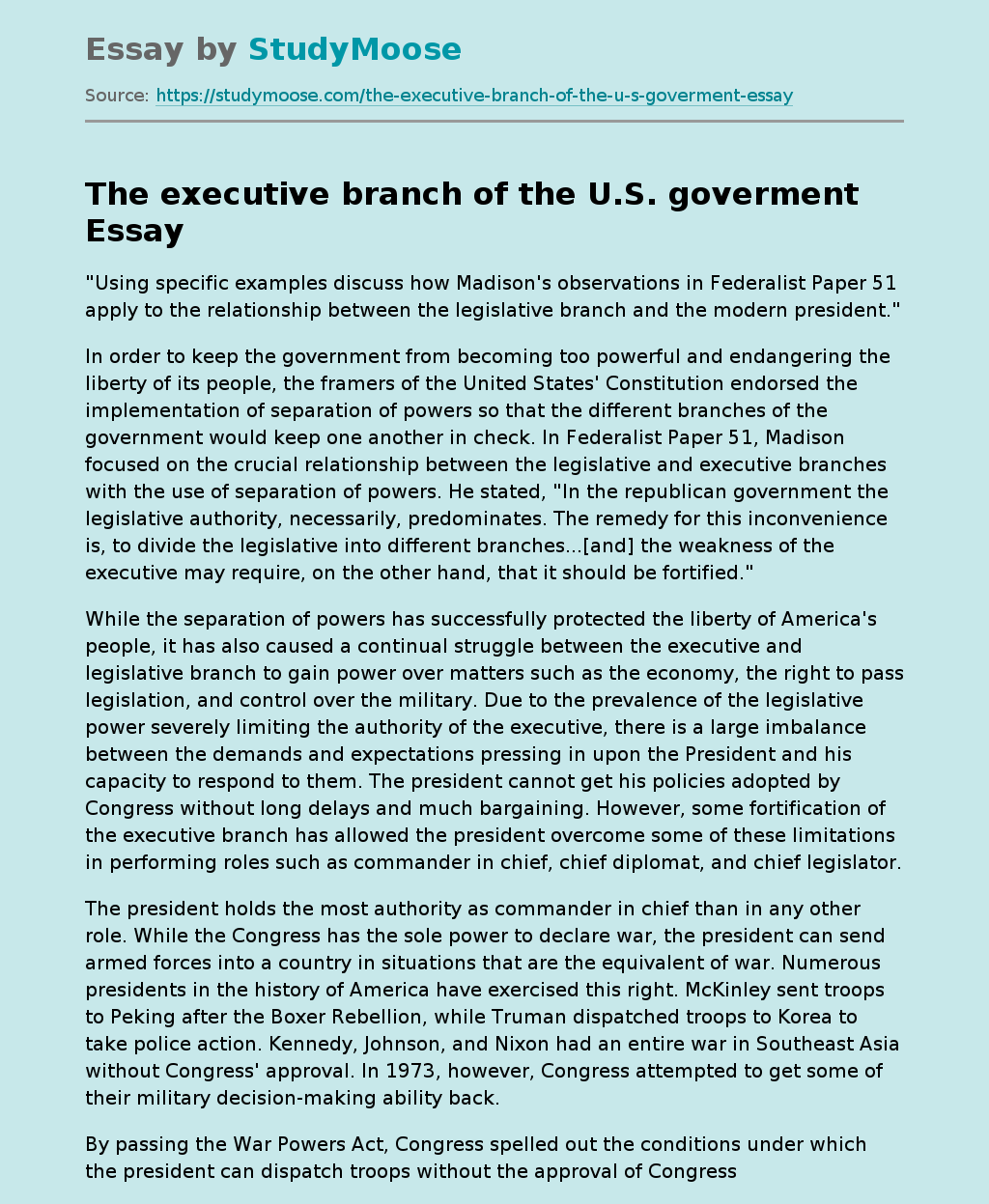