The Election Commission of India

Turn in your highest-quality paper
Get a qualified writer to help you with
“ The Election Commission of India ”
Get high-quality paper
NEW! AI matching with writer

The present CEC is V.SundaramSampath.

N. Seshan as chief election commissioner in 1991 reinvigorated the Election Commission and curbed the illegal manipulation of India’s electoral system. By cancelling or repolling elections where improprieties had occurred, disciplining errant poll officers, and fighting for the right to deploy paramilitary forces in sensitive areas, Seshan forced candidates to take the Election Commission’s code of conduct seriously and strengthened its supervisory machinery. In Uttar Pradesh, where more than 100 persons were killed in the 1991 elections, Seshan succeeded in reducing the number killed to two in the November 1993 assembly elections by enforcing compulsory deposit of all licensed firearms, banning unauthorised vehicular traffic, and supplementing local police with paramilitary units. In state assembly elections in Andhra Pradesh, Goa, Karnataka, and Sikkim, after raising ceilings for campaign expenditures to realistic levels, Seshan succeeded in getting candidates to comply with these limits by deploying 337 audit officers to keep daily accounts of the candidates’ election expenditures. Although Seshan has received enthusiastic support from the public, he has stirred great controversy among the country’s politicians. In October 1993, the Supreme Court issued a ruling that confirmed the supremacy of the chief election commissioner, thereby deflecting an effort to rein in Seshan by appointing an additional two election commissioners. Congress (I)’s attempt to curb Seshan’s powers through a constitutional amendment was foiled after a public outcry weakened its support in Parliament.

Use of Scientific and Technological Advancements

The Election Commission had tried to bring improvements in election procedures by introduction of EVM – Electronic Voting Machines. It was used with view to reducing malpractices and also improving the efficiency. On experimental basis it was firstly tried in the State of Kerala in 1982 for Legislative Assembly Elections. After successful testing and legal inquires the commission took historic decision to go ahead and start use of EVMs.[5] The Election Commission making use of Information Technology launched a web site of its own on 28 February 1998. It helps to provide accurate information, management, administration and instant results of the elections. In 1998, Election Commission decided programme for ‘computerisations’ of the electoral rolls. To prevent electoral fraud, in 1993 EPICs – Electorals Photo Identity Cards were issued. In 2004 elections, it was mandatory to possess card.

Guardian of Free and Fair Elections
One of the most important features of the democratic polity is elections at regular intervals. Democracy is the “Government of the people, By the people, And for the people”. Holding periodic free & fair elections are essentials of democratic system. It is part of basic structure of the Constitution which has been held in T. N. Sheshan V/s Union of India.[6]The Commission has taken many efforts for the success of elections and thereby democracy.

The Commission can issue an order for prohibition of publication and disseminating of results of opinion polls (Exit Polls).

The Election Commission of India. (2016, Mar 05). Retrieved from https://studymoose.com/the-election-commission-of-india-essay 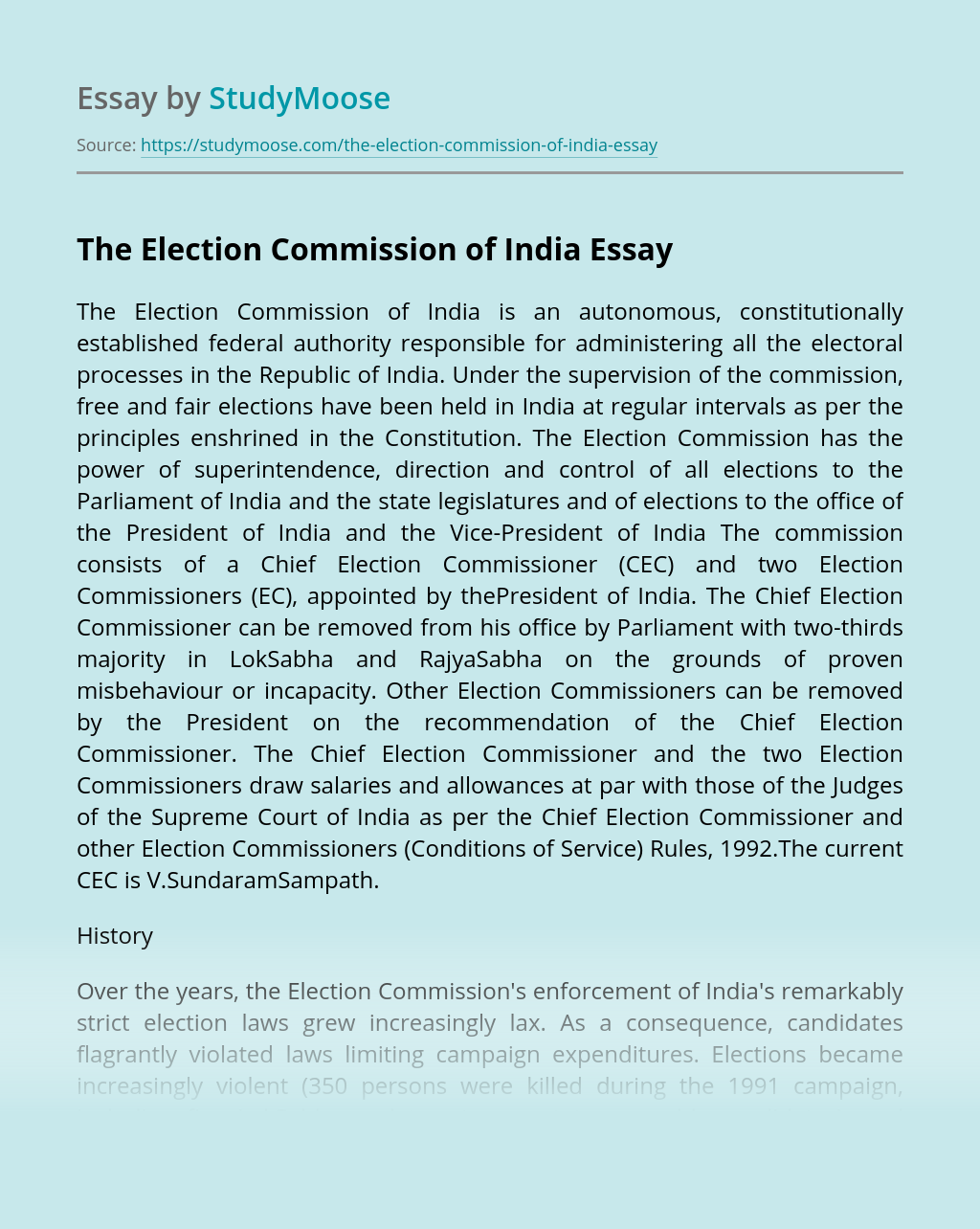 Turn in your highest-quality paper
Get a qualified writer to help you with
“ The Election Commission of India ”
Get high-quality paper
Helping students since 2015
Stay Safe, Stay Original