Is India Safe for India Women?

Woman is the builder and moulder of a nation’s destiny. Though delicate and soft as a lily, she has a heart, far stronger and bolder than of man.She is the supreme inspiration for man’s onward march, an embodiment of love, pity and compassion, she is no doubt, her commanding personality; nevertheless, is given by solemn.Our women have a very great part to play in the progress of our country, as the mental and physical contact of women with life is much more lasting and comprehensive than that of men.

Don't use plagiarized sources. Get your custom essay on
“ Is India Safe for India Women? ”
Get custom paper
NEW! smart matching with writer

Not for nothing was it said that ‘the hand that rocks the cradle rules the world’. In the apron strings of woman is hidden the revolutionary energy which can establish paradise on this earth.Women have generally been looked down upon with disdainful contempt. All sorts of strictures have been inflicted upon them, reducing their status to a mere play thing or a slave of man’s whims, a mere chattel to be dumb driven.

They have been confined to the hearth and home.

The orthodox male-oriented society in India has still not been able to adjust itself to the fresh wave of women’s liberation .But ours is still a male-dominated society. Women still continue to be exploited. There are still places where women are beaten, raped, and murdered without so much as a second thought practices.India is one of these places. A place that is both progressive on paper and in some urban areas but are also far behind in practice and in rural communities.

What progress has already been made to protect women in India and what still needs to be done to ensure the equal treatment of women in all areas of India? Violence against women and girls represents a global health, economic development, and human rights problem. At least one out of every three women worldwide has been beaten, coerced into sex, or otherwise abused in her lifetime, with rates of domestic violence reaching 70% in some countries.

This abuse of women and their rights is something more developed countries are taking very seriously. Over 7,000 women in India will be murdered by their family or their husband’s family because of arguments about dowries. Violence against women is rooted in a global culture of discrimination which denies women equal rights with men and which legitimizes the appropriation of women’s bodies for individual gratification or political ends. Every year, violence in the home and the community devastates the lives of millions of women. The study of why and how women are treated they way they have been is a fairly recent study.In practice they are being denied their rights and privileges. In practical life they are neither given equal rights, or status nor opportunities.5ons are given preference and better treatment while daughters are considered as curse and liabilities.

Their marriage is still a big problem and parents have to arrange for large dowries to get their daughters married. In some parts of the country the girl-infants are still killed. Women are still raped, molested, ill-treated humiliated, forced to adopt prostitution and burnt alive by their greedy in-laws. Even the educated and employed women have to depend on their husbands or in-laws for money etc. Employed women are the worst sufferers as they have to work hard both at home and in the office. Moreover, they don’t have control on their purses and earnings. a woman as a daughter, wife, mother, widow etc., has to live in eternal economic slavery. She is still actually not free to choose and make her destiny.

They should rise in a body and wage a relentless struggle against injustice in its various forms. They should never think in terms of weaker and fair sex. The weak and helpless are destined to be ever exploited and discriminated against, they will have to raise, struggle and sweat for their rights, freedom, empowerment and economic independence. There is no room either for complexes or complacency. They should refuse to be treated as sex objects, a thing of domestic utility, as anatomically inferior or a movable biological asset of man in marriage. They should refuse to be used as sex- symbols and models to attract business. Let there be no beauty contests where they are used as instruments to attract attention sensually.

Is India Safe for India Women?. (2016, Nov 29). Retrieved from https://studymoose.com/is-india-safe-for-india-women-essay 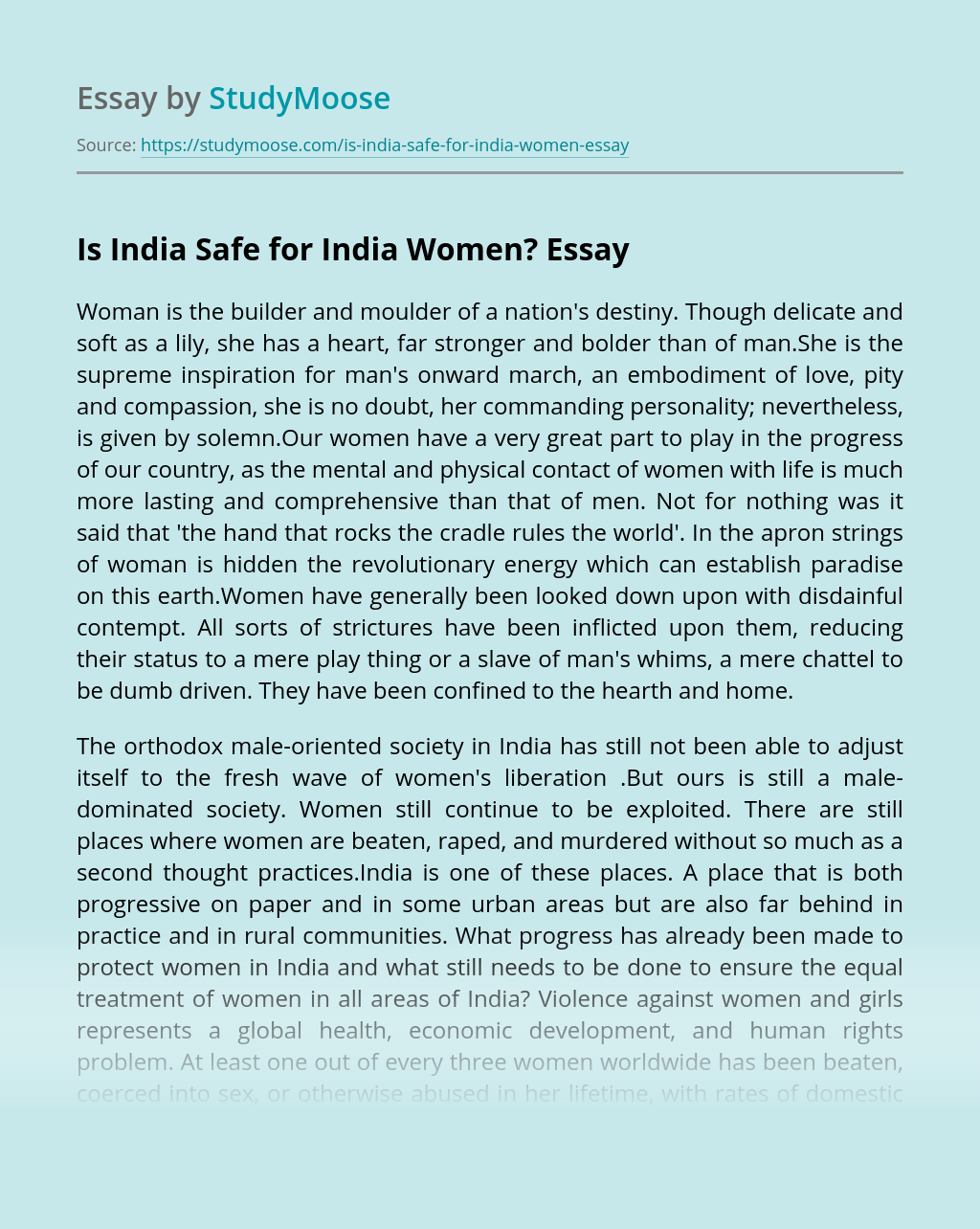