The Differences between Realism, Modernism and Postmodernism

Such a great variety of arts exist now: sculpture, paintings, architecture, poems, dance, etc. Can you realize that each century had own directions, preferences, and thoughts about what is good, beautiful and acceptable? That’s why every epoch is represented by the new direction of art. They differ from each other, but at the same time following direction often, even always, absorb some tiny things of the previous one. The main are Classicism, Sentimentalism, Romanticism, Realism, Modernism, and Postmodernism. Let’s focus on the last three points, and what is the difference between them.

Don't use plagiarized sources. Get your custom essay on
“ The Differences between Realism, Modernism and Postmodernism ”
Get custom paper
NEW! smart matching with writer

We will start with differences between Realism vs. Modernism. They both show people what the real life they lived in was; they didn’t embellish or overdraw, just simple, real things.

The interesting old traditional values, beliefs, and the new rational, logical views became to appear as a huge difference between Modernism vs. Realism. In the school, it is said that period of Realism dates between 1860 – 1900.

Now let’s talk about Modernism in details.
It is said that Modernism showed up between 1900 – 1930. However, several literary scholars think that it appeared in the middle of the 20th century and existed even after the half. Another says that it lasted till period after Vietnam War, what was close to 1990th, and only after that year started the Post-Modernism era.

Let’s move to the difference between modernism and postmodernism. As it was mentioned before, the former supported the belief that there is an exact purpose in each movement of life. And it should be viewed objectively, of course. Modernists had an optimistic view of the world. They believed that there existed concrete values and ethics that need to be followed. It wasn’t concentrated on politics which gave more opportunities to think about significant things. The era was a period of completely huge advancement of every piece of art, especially in pictures and literature. Of course, music, poetry, architecture was presented as well. Whole period differs in being a mirror image with its simplicity and elegance at the same time.

The latter is a movement that took place after the Second World War, but it got the biggest popularity on 1960th. It was a little bit chaotic era which is hard to comprehend and appraise. Its main idea was that world has no one universal truth. It used an unscientific approach to life and believed that all things are irrational. Postmodernists believed in chance and transience. They questioned the rationality of modernism, it’s principles, and thinking. They believed that there is no connection between the past and the present and that past event are irrelevant in the present.

As we see Modernism was a kind of refusal movement; it disagreed with the conservative views, ideologies, and theories of Realism. It was revolutionary in that sense that it challenged the issues that blocked the human progress. It focuses deeply on human efforts, self-consciousness to examine all aspects of human life and change the things that were wrong. Starting from commerce and trade to philosophy, Modernism questioned everything and encouraged individuals to find answers to problems by deep thinking, self-experiments and knowledge.
The main thought in Realism was that the reality in everyday life is the only truth. It is not dependent on any power of observers, and so, it must be depicted as it is, in arts and literature. Modernism later challenged Realism and focused on inner self-consciousness and the power of scientific experimentation to challenge and consequently change reality.

Modernism vs. Postmodernism literature. Now, differences between modernism and postmodernism are visible.
All of them: realism, modernism, and postmodernism had essential effects on arts, culture, music, and literature. Debates between Realism, Modernism vs. Postmodernism, have always existed between scholars and art lovers. Some of them say that Realism is no more than a dead weight now, while various others believe that Modernism has been long ago taken over Post-Modernism trends. This essay is not the full answer to all the depth of literature directions, to learn more you have to read popular novels and books which are related to those directions. It will completely and fully help you understand the nuances of those eras and the writing styles, more profoundly.

Believe, now you are ready to make your conclusions. Don’t stop reading, finding out and even writing more.

The Differences between Realism, Modernism and Postmodernism. (2016, Apr 04). Retrieved from http://studymoose.com/the-differences-between-realism-modernism-and-postmodernism-essay 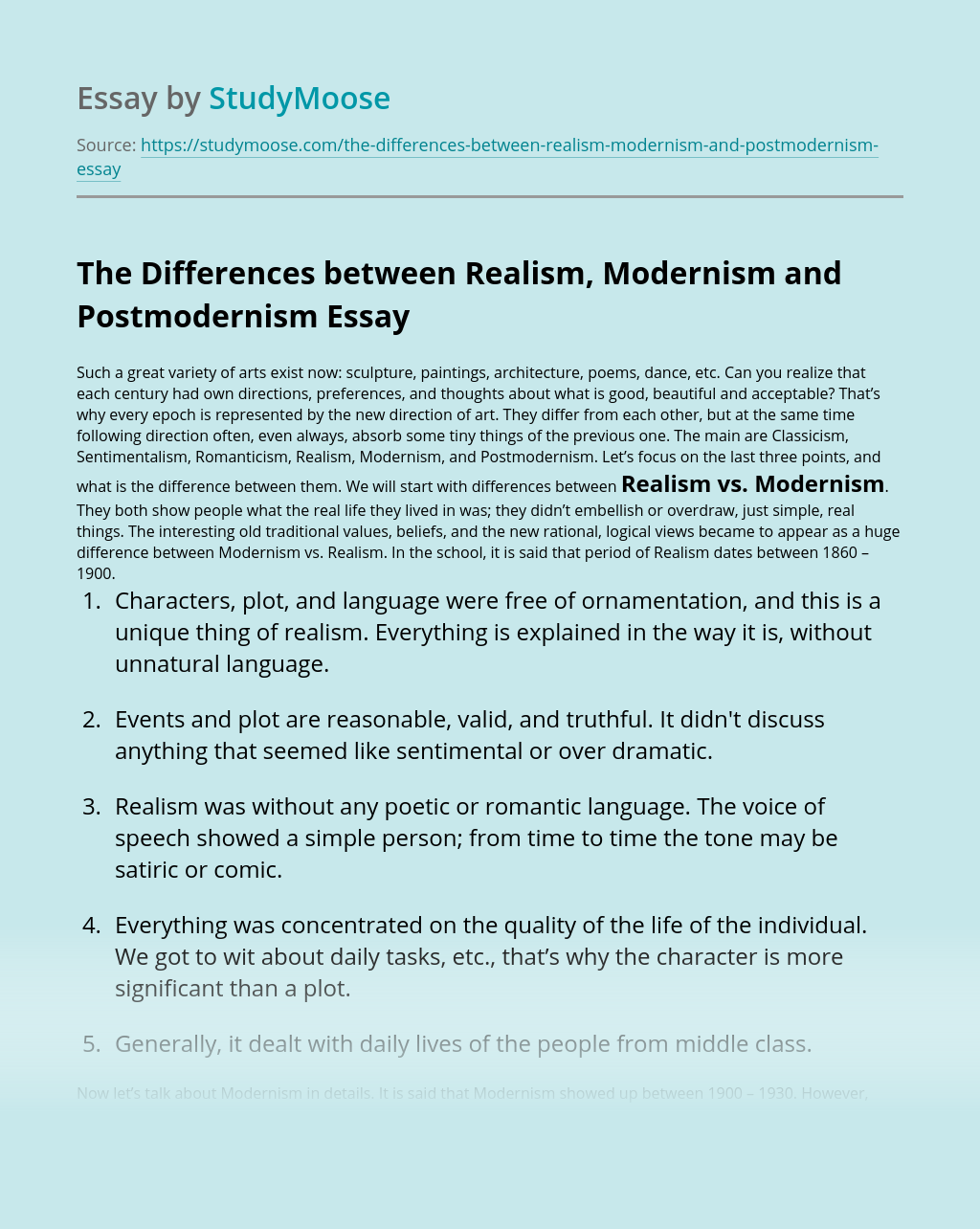