The Culture of Hooking Up

In 1997, a Brown University student expressed to The New York Times,” In a normal relationship, you meet, get drunk, hook up” (Stepp 33). Today college students are living in an environment saturated with sex. With tools such as the Internet, media and numerous of other sources producing sexual content, students are exposed to this material more than ever. During college, self-exploration and experimentation are prominent driving forces more than ever. It seems as though hooking up has replaced dating on college campuses, and for this reason the phenomenon has begun to attract the academic community.

Don't use plagiarized sources. Get your custom essay on
“ The Culture of Hooking Up ”
Get custom paper
NEW! smart matching with writer

It surprisingly appears that sexual experimentation is becoming a socially acceptable rite of passage. But it is not surprising that college students are having sex; and more often than not outside a committed relationship. But this rite of passage does not come without the serious physical, emotional, and social consequences; and this the case for most women. (Thomas 2010) Scholar’s Garcia and Reiber, express in their article Hook-Up Behavior: A Biopsychosocial Perspective that, “’Hooking up’ has become a normative sexual experience on college campuses today” (p.

With the media and observed texts shedding light on this new phenomenon, a plethora of common hook up definitions has transpired from research. A hook-up is a phenomenon defined as, “a sexual encounter which may or may not include sexual intercourse, usually occurring between people who are strangers or brief acquaintances” (Paul p.76). The frequently described no strings attached sex has surpassed traditional dating on college campuses, and has become the accepted norm.

This extensive epidemic that causes students to engage in casual sex with friends, acquaintances, or complete strangers has affected the emotional, mental, and physical well-being of these students.

While more researchers are gathering quantitative data on the frequency of hook ups, some researches have reported data that varied from campus to campus, while demographics and ecological differences also played a part in these statistics. Researchers Paul, McManus an Hayes (2000) had found approximately 78% of participants had hooked up; two years later, Paul and Hayes (2002) reported that 70% of undergraduate participants studied had engaged in at least one hook up in their college career. In 2003 researchers Lambert, Kahn and Apple found that 78% of female and 84% of male participants had hooked up. In a nationally representative study of individuals ages 12-21, who were sexually experienced, 70-85% reported engaging in a casual sex experience within the last year. (Garcia & Reiber p. 193)

Hooking Up: In Depth

As stated earlier research has allowed numerous hook-up definitions to surface in the academic community. A hookup is a spontaneous sexual interaction, usually lasting one night, between two individuals that are: 1) not in a traditional romantic relationship (i.e. not dating), 2) and not are not promised to any subsequent intimate relationships (Garcia & Reiber, 2008, Paul, 2000). These two individuals who may be strangers, acquaintances, or even close friends are engaging in a range of behaviors that include kissing, oral sex, sexual touching, and sexual intercourse. Researches have reported that hookups are more likely to occur at dormitories, parties, clubs and bars, fraternity houses or any available social gathering (Garcia & Reiber, 2008). Of course alcohol consumption and drug use have been linked to hookups, and these factors are often known to facilitate the experience and increase the overall risks of hooking up (Garcia & Reiber, 2008).

Although hookups are uncommitted intimate relationships and encounters, a couple of terms try to fall under the hookup umbrella. Casual sex and ‘friends with benefits’ (FWB) are different from hookups, because the intentions and motivations for these acts may differ from the motivations of hookups. Hookup partners are considered not to have any emotional attachments. Sexual educators and authors Levine and Mangeau, agree with the no strings attached commitment when they describe casual sex. They express that the point of having FWB or casual sex is for partners to have sex without the “romantic label and commitments, emotions, and hassles” that come along with a romantic relationship.

Levine and Mangeau continue to write, “For the most part, a friend with benefits involves people who have sex with someone they know and like while attempting to avoid the romantic feelings and label that come with romantic relationship. In the “no strings attached” ideal, the relationship is understood as a friendship, not a romance, and the ex is thought of as casual, not relational.” (Levine & Mongeau p. 95) But Garcia and Reiber argue that while FWB engages in a recurring sexual contract of frequent sexual activities without dating, attachment, or romantic commitment, the partners do maintain an “underlying friendship” that distinguishes them from acts of hooking up (Garcia and Reiber p.194). Though I concede that there is a difference between casual sex, FWB, and hookups, I still insist that the terms fall under the same category. And I will refer to casual sex as a division of the hookup culture to some extent.

Who Benefits? Male vs. Female

Traditionally there has always been a stereotype regarding men’s and women’s sexual interest and activities. These traditional stereotypes have led to gender roles setting the standard for different sexual expectations, meaning society’s “double standard” for men and women. What is socially expected of woman’s sexual interest and activities has brought attention to feminist, scholars, and outlets of media (i.e. Sex in the City). Researchers Grello, Welsh, and Harper (2006) suggest that there is abundant evidence of gender being an imperative factor in casual sex participation. The study continues to explain that emotional investment is very important, and that a females’ command of intimacy and emotional commitment is a priority in their late adolescent development. Grello, Welsh, and Harper is surely right about gender being an important factor in hooking up because, as she may not be aware, recent studies have shown that men feel that it is essential to be respected, and that it is important to preserve their status and independence. While women feel that it is more important to be liked, seeking intimacy and human communication.

I am referring to Deborah Tannen’s Genderlect Styles theory, the overall suggestion that men and women are different because they communicate cross-culturally. (Griffin 2006). Granting, our society has culturally evolved, women still have not reached the point of sexual equality. Women begin to find themselves caught between “old traditions and new expectations.” This possibly causes a confusing environment for today’s college female women. In Anna Thomas’s 2010 thesis proposal she references researcher Seaman, and his findings of women having feelings of anger and shame or feeling incomplete when engaging in these hookups. (Thomas p.18) In making this comment, Seaman is arguing that women with these feelings attempted to “legitimize the hookup so not to leave the encounter undefined” (Thomas p.18). I infer that the women take these behaviors to have self-gratification, to make their selves feel better from the hookup. So why do females seek empty sexual encounters? (Motivations)

In Garcia and Reiber (2008) study, nine in ten students reported physical pleasure as a motivation for hooking up (sexual gratification). Also in the same study, 54% exported to have emotional intentions for the hookup. Various studies have found that the potential to form a relationship as a result of the hookup is a main motivation for both men and women, but there is a gender difference with women hoping for relationship more than men. (Heldman & Wade 2010) I am presuming that females who conform to the hookup culture are defined as a pervasive, persistent, and have an inflexible pattern of behavior. Their character is maybe a person who is uncomfortable when not the center of attention, has inappropriately sexually seductive or provocative behavior (promiscuous), shows shallow expression of emotion, draws attention through his or her physical appearance (overly concerned with style of dress).

I am also assuming given the definition of hookups, that these females are thriving off of craving the excitement from engaging in sexual acts with a mere stranger or acquaintance with no commitment afterwards. These females may also be lively, enthusiastic, dramatic, flirtatious and easily influenced. As a result of these personality traits (attention seeking) and confusion of the double standards previously discussed, college females are more inclined to engage in risky behaviors that can lead to risky sexual behaviors. Risky behaviors are described as binge drinking, drunk driving, and drug use. Fulton, Marcus, and Payne’s study examined the relations between personality and several risky sexual variables. Scholars Fulton, Marcus, and Payne defines risky sexual behavior (RSB) as “any behavior that increases the probability of negative consequences associated with sexual contact, including AIDs, or other sexually transmitted diseases (STDs) and unplanned pregnancy (p.29).” Essentially, RSB among females is having unprotected sex vaginally, orally, anally, sex with multiple partners, hook-ups and sex with high risk partners.

On reviewing various literatures, I have decided that my proposed research question is a replication of various studies done on the hookup culture topic. Garcia and Reiber suggest that much of the research on hook-up culture has not been about “particular sex acts per se” but is focusing more on the motivation, properties, and sequelae (aftereffect) of the uncommitted relationship that exists between the actors (p. 193). My research question attempts to clarify the relationship between college female’s high risk taking behaviors and the defining characteristics of the Hook-Up culture. Essentially, I am arguing that college females that engage in sensation seeking behaviors (high-risk behaviors) are more likely to participate in the hook-up culture and experience a level of sexual regret.

The Culture of Hooking Up. (2017, Jan 08). Retrieved from https://studymoose.com/the-culture-of-hooking-up-essay 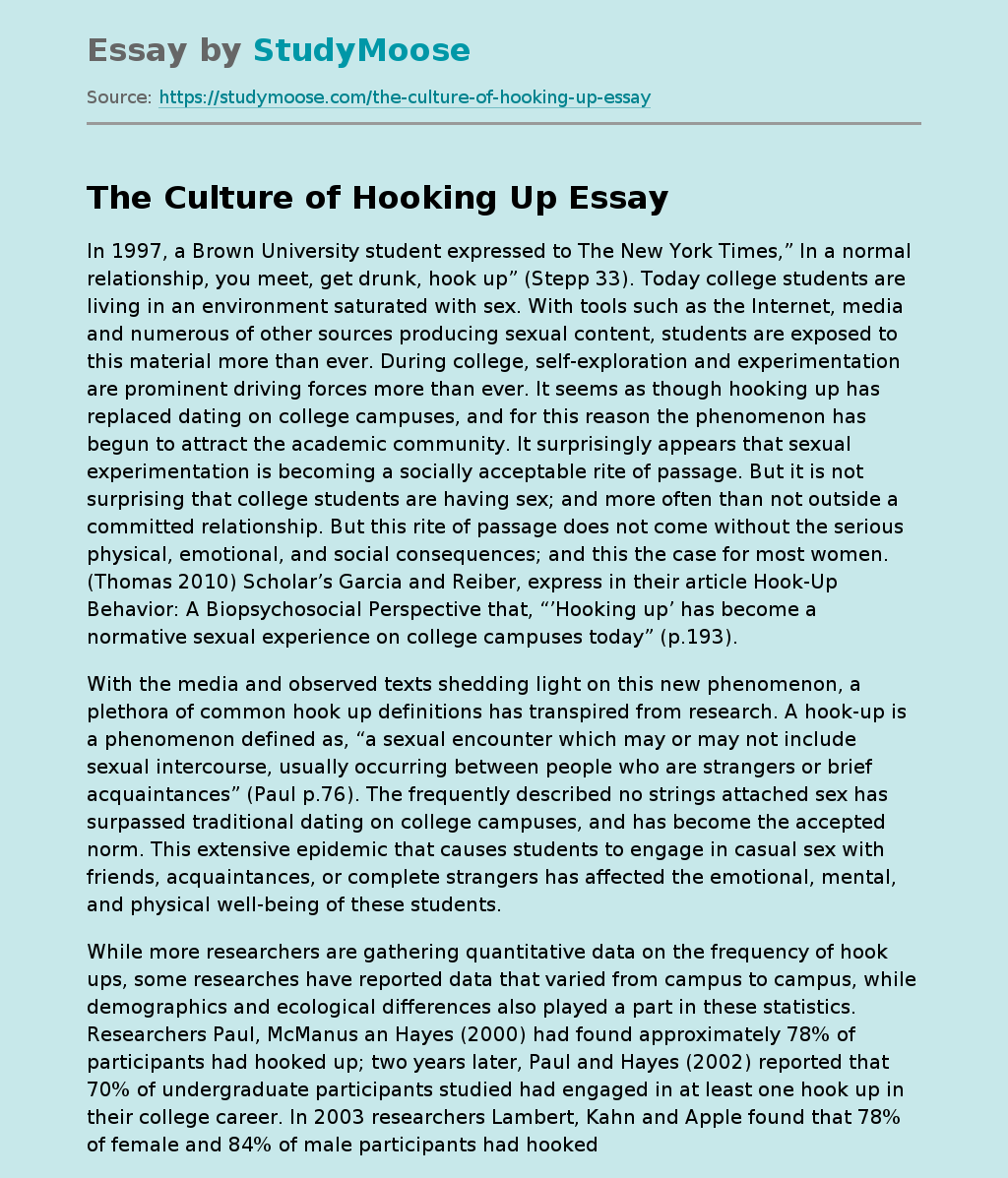