The Concept of Callout Culture

Most people probably know most the vocabulary involved in callout culture, as it is a phenomenon we all experience, but it is helpful to have them put into words. Political correctness, which is the basis for callout culture, is a “term used to refer to language that seems intended to give the least amount of offense, especially when describing groups identified by… race, gender, culture, or sexual orientation” (Roper np). Callout culture is when people take political correctness into their own hands and publicly shame people for offenses against those rules.

Don't use plagiarized sources. Get your custom essay on
“ The Concept of Callout Culture ”
Get custom paper
NEW! smart matching with writer

Where did callout culture come from? The idea of political correctness was first coined in 1917 during the Russian Revolution, where it represented following the rules of the Communist Party. Later, in the 70s and 80s, it was used by liberal politicians to talk about extreme leftists and, in the 90s, used primarily by Republicans to show opposition to the way universities taught in left-leaning ways (Roper np).

However, as discussed by biological anthropology professor, Richard Wrangham, in an episode of NPR’s Invisibilia, traces of callout culture can be found since the beginning of human societies. Humans have always been inflicting pain, physical and emotional, to strengthen their morality. As he put it is, “one of the great advances forward in early human history was when subordinate men, with the help of weapons and language, banded together to execute the bullies” (Tallo np).

It is easy to draw connections between early societal rules and callout culture today, making me wonder if there is a part of the human brain leading us to our current culture.

Callout culture in the way we experience it today has never existed before in recorded human experience. This is partly due to the idea of microaggressions, which were first introduced by Derald Wing Sue in 2007. As described in Greg Lukianoff and Jonathan Haidt’s book, The Coddling of the American Mind: How Good Intentions and Bad Ideas Are Setting Up a Generation for Failure, microaggressions thrive off of nine cognitive distortions, or ways of thinking that contribute to depression or anxiety and limit social interactions, debates, and more. These include emotional reasoning, catastrophizing, overgeneralizing, black and white thinking (dichotomous thinking), mind reading, labeling, negative filtering, discounting positives, and blaming (Lukianoff 37). Microaggressions are small things that people may say or do that intentionally or unintentionally imply negative beliefs about a minority. Microaggressions is that they completely discount the “offender’s” interpretation and encourage the belief that, just because you feel offended, the person was being aggressive. Most importantly, this idea shifted the balance between intent and impact. When deciding if someone is guilty, whether or not they meant to do it is taken into account. In microaggressions, only impact matters, even though “a faux pas does not make someone an evil person or aggressor” (Lukianoff 43). Microaggressions impact young people all over the United States, as they have introduced new reasons to be offended (Lukianoff). I found how problematic microaggressions are concerning. Students, like myself, have been told to stand up to them in many programs including SSA, YEDs, and more.

Another concept that has played a role in callout culture are safe spaces. Safe spaces, or place where people can feel as if they are safe from discrimination or microaggressions, feed off the concept creep of safety from physical well being to include emotions. People now feel unsafe during debates or arguments, like at Brown when two speakers were invited to debate whether or not America was a rape culture. People felt unsafe because the opposition’s presence and created both a separate conversation without any opposing viewpoints and a safe space where people could go to relax and avoid traumatic triggers (Lukianoff 28). Lukianoff and Haidt write that being exposed to “triggers” is how to improve after suffering traumatic experiences and that “avoiding triggers is a symptom of PTSD, not a treatment for it” (Lukianoff 28). Safe spaces are counterproductive to the emotional “safety” of people who have experienced trauma. Clearly our society “encourages people to systematically protect one another from the very experiences embedded in daily life that they need in order to become strong and healthy” (Lukianoff 29). The perceived need for safe spaces has grown to make 58% of college students say that it is necessary for them to be in an environment without any contradictory ideas (Lukianoff 48). Students only feel comfortable disagreeing in small groups of people they know well and “would rather conform to group think[ing] than voice their opposite opinions in group settings” (Friedersdorf np). I believe that this shows how dysfunctional our society has become, as disagreement is the only way to grow each person’s argument and interpersonal relationships.

As discussed in Conor Friedersdorf’s article, “The Destructiveness of Call-Out Culture on Campus”, social media’s role in callout culture is undeniable, yet controversial. Some believe that Gen Z is lucky to have the opportunity to stay connected with one another. Others believe that the one-in-a-million chance of going viral is exciting. However, the other camp is scared by the “stresses of call-out culture” (Friedersdorf np). Though they are opposed to discrimination and oppression based on race, gender, sexual orientation, and culture, they are afraid that political correctness extends to another level, getting people “‘worked up over the smallest of issues’” (Friedersdorf np). Social media’s impact on callout culture comes from “enabl[ing] students to be hostile from behind a screen, or to pile on[to]” (Friedersdorf np) a student who may have had a slight slip of the tongue (Friedersdorf np).

Who is involved in callout culture? The United States seems to be easily divided into two neat boxes. As discussed in Yascha Mounk’s article from The Atlantic, “Americans Strongly Dislike PC Culture”, this is not at all the case. Study conducted by More in Common, shows that there are seven clusters of people: “progressive activists, traditional liberals, passive liberals, the politically disengaged, moderates, traditional conservatives, and devoted conservatives” (Mounk np). Most people in the middle of the spectrum, not progressive activists or traditional/devoted conservatives, are called the “exhausted majority”. They are approximately 66% of the population and dislike callout culture and clashing opinions, are willing to change their opinions, and feel as if they are not heard. 25% of the population are traditional or devoted conservatives, while 8% fall into the progressive activists. What factors play a role in deciding whether or not you like political correctness, as 80% of Americans don’t? Race is not a deciding factor, as the stances on callout culture were all similar, the biggest outlier being 5% below the average of people who dislike it.

Income does not play a major role, though the population of people with higher incomes is less likely to believe that political correctness is a problem. Education plays a slightly bigger role but is not the major factor. People with a postgraduate degree are 21% more likely to agree with callout culture. The biggest factor is one’s political tribes. 30% of progressive activists, the most liberal group, dislike political correctness. Progressive activists, the most likely to participate in callout culture, are generally “rich, highly educated-and white” (Mounk np). They are the most homogenous political tribe (Mounk np). I find it very interesting that the group least discriminated against supports political correctness, and I think that it goes to show the problems rooted in callout culture do not lie in the discriminated, but those ashamed for their predecessors’ discrimination.

The Concept of Callout Culture. (2021, Oct 05). Retrieved from http://studymoose.com/the-concept-of-callout-culture-essay 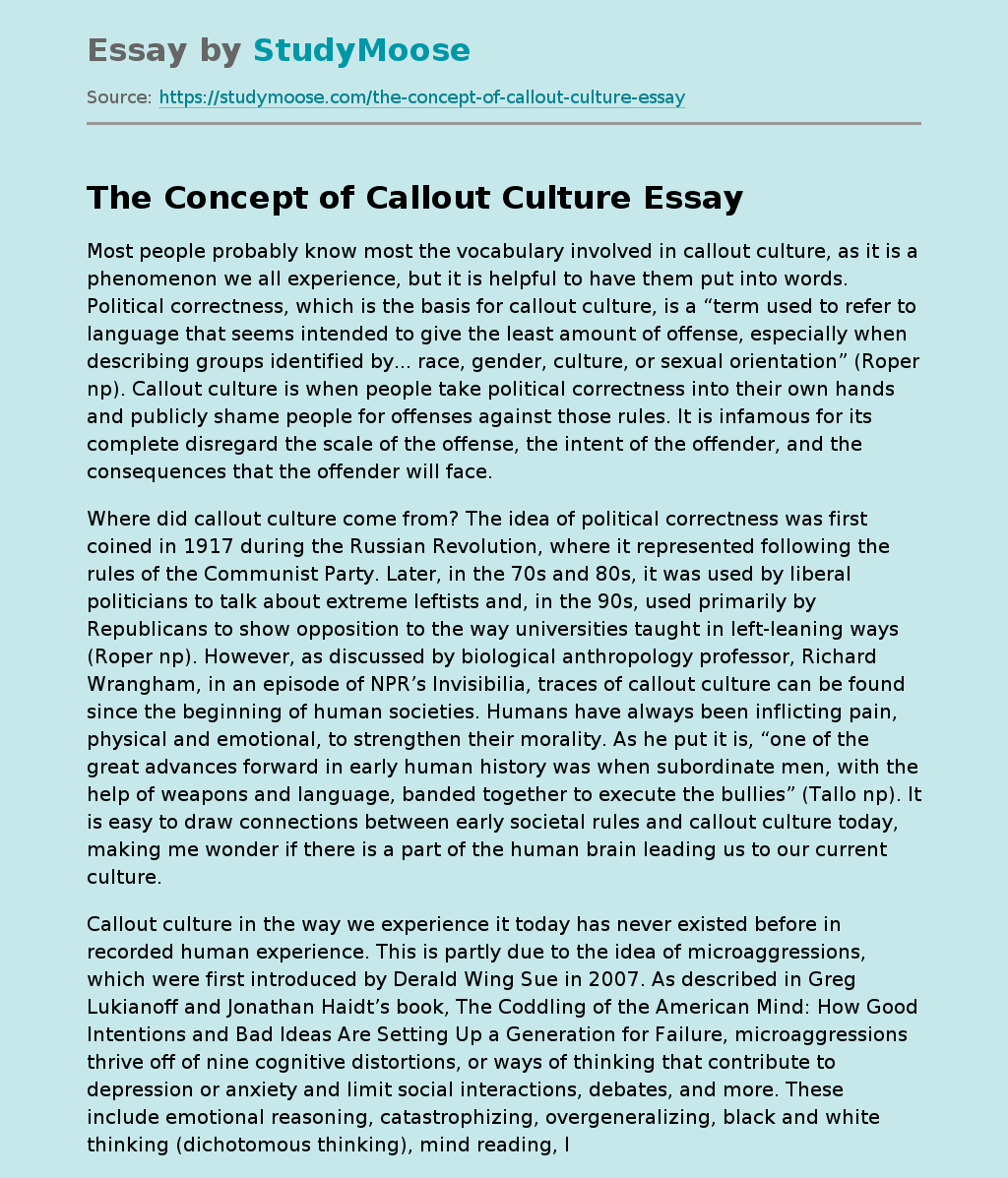