The Concept of Culture and Society Essay

Culture, as often defined in most sociology textbooks, is the way of life of a society. It is the sum of the ideas, beliefs, behaviors, norms, traditions, and activities shared by a particular group of people (Appelbaum and Chambliss, 1997). According to Giddens (1989), any society cannot exist without a culture. This means that culture is an important element that makes a group of people be called a society, a binding agent of the interrelationship among an assemblage of citizens, the core of any social system.

Don't use plagiarized sources.
Get Your Custom Essay on The Concept of Culture and Society Just from $13,9/Page

Culture, perhaps, is the most important aspect of a society. But why?

What roles does culture play in every society? For one, it sets the distinction between societies. People from Japan have their own set of culture, which sets them apart from the Chinese, who, in turn, also share within themselves a unique way of life that sets them apart from every other society in the world. Culture encompasses geographical or territorial borders. In relation to the study of organizational culture phenomenon, culture plays a significant role in societal formation.

Appelbaum and Chambliss (1997) identified a particular role of culture in society in their book Sociology.

According to them, “Culture builds up social institutions. ” Most of the time, almost every action people make depends greatly on the standards set by the society; in other words, individuals usually conform to what their culture dictates. For example, Muslim women cover their heads with veil almost all the time to abide by the beliefs of their religion. The post also mentioned a system or organization of activities lined up for the members of their church, which makes the group develop their own set of culture. Culture instills conformity, while conformity to culture is essential for any society to exist.

Changes in societies are also influenced by culture through learning. A child is born at a particular cultural context, and at his or her young age, he or she is bounded by the rules and beliefs provided by the culture to which he or she belongs. But through the years, as the child grows up, he or she becomes exposed to a vast number of realities that may or may deviate from his or her cultural inheritance, or in other words, he or she becomes open to the reality of cultural diversity. Acceptance of these realities may result to change, and if people adopt individual changes, it may result to a change within the society.

Culture paves the way for social institutions to interact. Social institutions are the following: the family, government, education, work, and religion, among others. These institutions work together and their roles and functions are interrelated with one another. Social institutions, in the most important sense, are responsible for producing the kind of person an individual becomes and the kind of society the people under it constitutes. References Appelbaum, R. P. & Chambliss, W. J. (1997). Sociology. New York: Longman Publishing Group Giddens, A. (1984). The Constitution of Society. CA: University of California Press

The Concept of Culture and Society. (2016, Aug 15). Retrieved from https://studymoose.com/the-concept-of-culture-and-society-essay 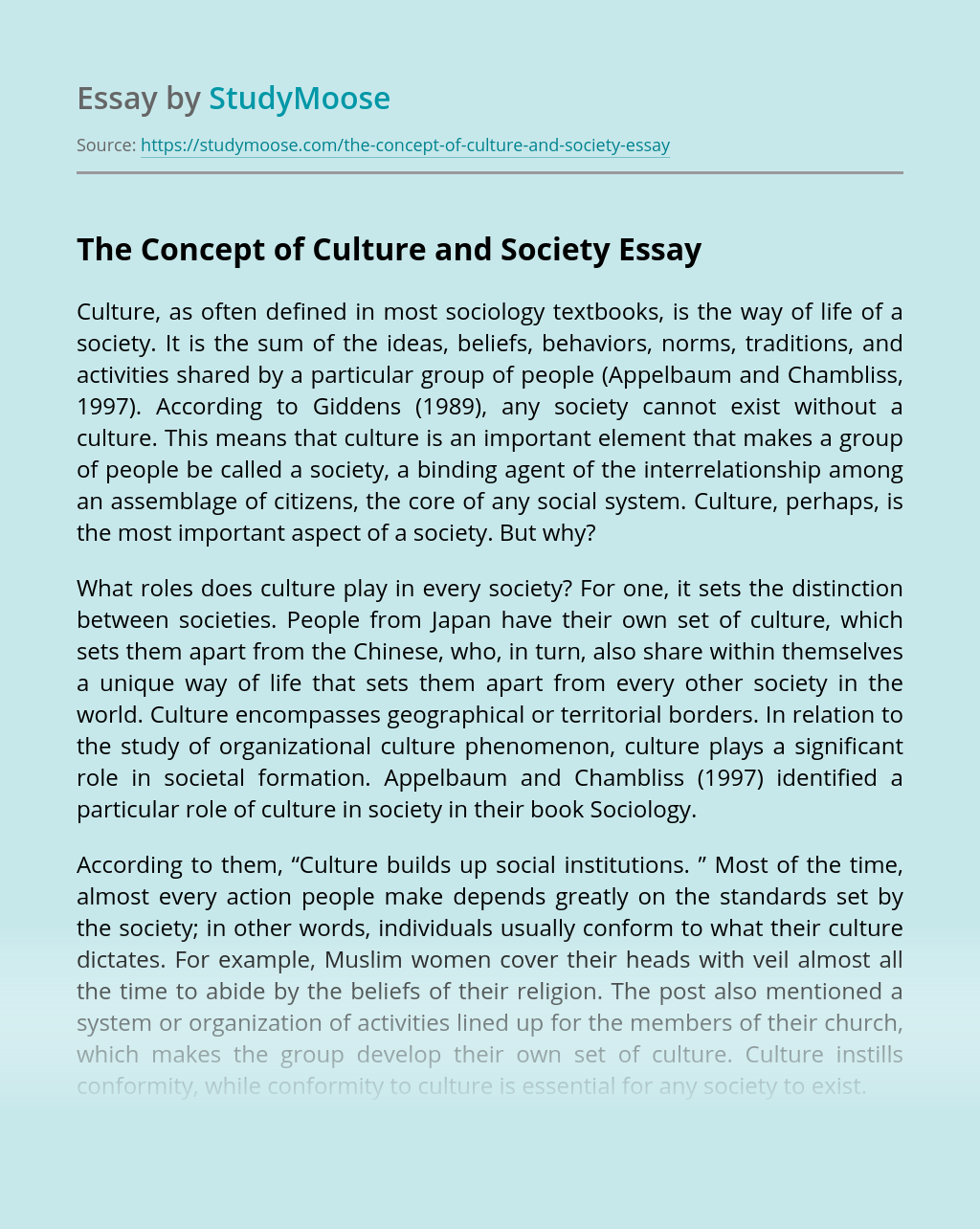