During the late 14th century, Europeans had occupied themselves in a severe and demanding exploration of the unknown world that surrounded them. They were very curious as to what they could find. One of the biggest findings European sailors eventually discovered was a connection of the Old World (Europe) and the New World (the Americas). This was called “The Columbian Exchange. ” The Columbian Exchange, between the Europeans and the Native Americans, was a significantly cultural and academic experience for both.

It was a trade between the New and Old world which exchanged items such as animals, plants, cultural ideas, and nasty contagious diseases.

The two worlds had been separated for hundreds of years and both developed their communities along entirely different paths. Their first encounter with each other was very exciting yet very fearful. Both civilizations had much to offer and to express with one another which were both positive and negative for both worlds. The Columbian Exchange made the world a better place.

Although during this era there were many explorers who attempted to connect both worlds by sailing the seas, such as the Portuguese’s own Prince Henry the Navigator, one of the best known explorers was Christopher Columbus. He was the man that accomplished bringing the Old and the New Worlds together. On the night of October 11, 1492, on board the Santa Maria in the Atlantic Ocean, he saw a light in the far distance that was thought to be the costal islands of Eastern India but were later found to be the Bahamas.

The connection between the Old and New Worlds, which for more than ten millennia had been no more than a tenuous thing of Viking voyages, drifting fisherman, and shadowy contacts via Polynesia…” At first the Europeans thought they were just off the coast of Asia, but were soon to be in awe of the flora and fauna of the land they had encountered. “I saw neither sheep nor goats nor any other beast, but I have been here but a short time, half a day; yet if there were any I couldn’t have failed to see them. There were dogs that never barked.

All the trees were as different from ours as day from night, and so the fruits, the herbage, the rocks, and all things. ” This discovery led to many good things, which had a huge impact on both worlds. When the connection of the two worlds occurred, the Europeans were shocked to see the type of people that lived on the New World. Due to never encountering these Native Americans, Columbus and his explorers found the natives the most exotic people they ever had ever met. “The Indians hair was not kinky, but straight and course like horsehair; the whole forehead and head is very broad, more so than any other race that I have ever seen. The Natives were very impressed with their first meeting with the Europeans.

They were very interested in their clothing, colours, weapons, shapes, and thought they were some sort of “demigod”, and continued to feel their skin to make sure the Europeans were human like themselves. This odd encounter was the first of many that inspired both the Europeans and Americans to do business with each other. Later on they began to trade all of these items including weapons, animals, plants, foods, and many others. Columbus began the trade routes, which was the first to be established between Europe and the Americas.

Without this encounter, both worlds would have never been what they are today. Both the Old and New worlds had much to offer for each other. They both learned a lot of different ways to do things, and different ways of life. They each took back many different things which improved the lives of many and had a positive impact on both sides of the world. This enabled both sides to start communicating and working with each other. While the Europeans began their exploration of the new Americas, they were exposed to new animals, plants and different types of foods.

The new types of foods that were most enjoyed by the Europeans included potatoes, corn, fruits, peppers, sugar cane and many others. The potato was one of the popular items as Europeans were now able to feed more people which allowed them to produce more children while increasing the population. Although many people in Europe now relied on the potato as a main source of food, they were devastated when all of their crops were wasted due to the great potato famine. Livestock such as alpacas and wild turkeys were brought back to Europe.

Europeans brought back rare furs from different animals that were considered “extravagant” items throughout Europe. The discoveries of lands flourished with gold, silver, and other treasures provoked the conquistadors to commence expeditions to the Americas. While many explorers stumbled upon lands with copious amounts of resources, the Americas were now luring in Europeans in search for a fresh and improved life. One of the things Europeans had over the Native Americans was sources of transportation and mobility. The natives had no wagons, plows, or any means of transportation.

They did everything on their own by the will of their own strength. Three main animals the Europeans shared with the Americans were donkeys, oxen, and horses. The horse highly benefited the Native Americans. They allowed hunters to cover a wider range of land, while locating and killing bison also became easier. The others were a new source of man power, which made it easier to farm, and do other jobs. On the other side, Europeans brought over some of their animals including cattle, sheep and pigs, which became sources of food and clothing for the Natives.

These new animals had a positive impact on both Europeans and Americans. Cotton was also new to the Natives, as the introduction of sheep helped along the production of wool textiles. At one point Columbus was offered tobacco leaves as a gift, which was later brought back and was later growing all over Europe. As it was said to be used for healing purposes, people were now selling it, and using it as a source of money. The Native Americans weren’t the only ones to introduce new foods to one another. The Europeans gave the Americans a little taste of Europe by sharing some of their foods with the Natives.

Grains such as rye, wheat, barley, oats, and rice, citrus fruits, onions, cabbage, cotton, coffee, sugar cane, many spices and herbs were amongst many other types of foods that were brought to the Americans. Since there was no refrigeration in this era, the Europeans taught the Americans how to use these spices to preserve their food. Sugarcane later became one of the major segments of the Columbian Exchange. Farmers were now learning different techniques and how to grow different crops. They were now deciding on what geographical location was best for each.

The worst impact the Columbian Exchange had on both the New and Old Worlds was the exchange of deadly diseases. Due to the new trade routes, it was impossible for Europeans, Africans, Americans, and Asians to not come in contact with each other. This blend of populations had effects that no one could have assumed. This contact caused the spreading of diseases. The Europeans brought over diseases such as smallpox, influenza, and tuberculosis to the Americans. These diseases were carried from the Spanish explorers who made their mark in the Caribbean islands, which spread through Europe and killed thousands of Europeans per year.

The Europeans carried back to Europe diseases such as typhus, and syphilis. Although syphilis was said to come from sexual encounters with American women, experts still debate the fact that there were signs of this disease in Western Europe. It was considered to be one of the most disastrous diseases of that time as it rapidly spread throughout Western Europe, and was often fatal. “In a showdown, it wouldn’t yield to leprosy, elephantiasis, ringworm, gout, or sycosis. ” It attracted many Renaissance physicians in its final stages as it was considered as a form of mental illness.

Religion was a big part of a person’s life during this time period. The majority of Europeans were religious. Some wanted to come to America to share their faiths and beliefs with the natives, while some left Europe to escape religious persecution and have the ability to believe in what they wanted to. The natives had a new sense of peace and kindness by accepting the Europeans religions. It was also an advantage for the Europeans, as the natives had a better sense of them believing the Europeans were good people after all.

Although at one point Columbus and his crew were taking advantage of the natives, not allowing them to practice their own religions. Europe received a significant economical boost due to the exchange. More jobs were now available for all people. Jobs included sailors who shipped and received items across seas and store owners who would sell these items to the public. Store owners wouldn’t make a lot of money off of these items, as the sailors would charge a lot for them. Sailors were always trying to find faster ways to ship cargo across the seas.

This increased the jobs for engineers to design faster yet stronger boats and carpenters who had to build them. More sailors and crew men were now needed to man these boats. These new trading routes improved Europe, improving their lives and put more people in the workforce. The Columbian Exchange had many positive and some negative impacts across the world. Humankind was now interacting with each other. Although diseases killed a lot of the population, and took many years for the population to get back to where it was, the Exchange still benefited the world.

It allowed the world to distribute and trade their resources with each other which boosted the whole economy. This allowed the whole population to discover new ways to live, and opened their eyes to new discoveries across the land. People were also travelling to different areas across the world. There was now enough food to sustain populations, and people were now making money to survive. If Columbus never made his way to the Americas in the late fourteenth century, the world would never be what it is today. 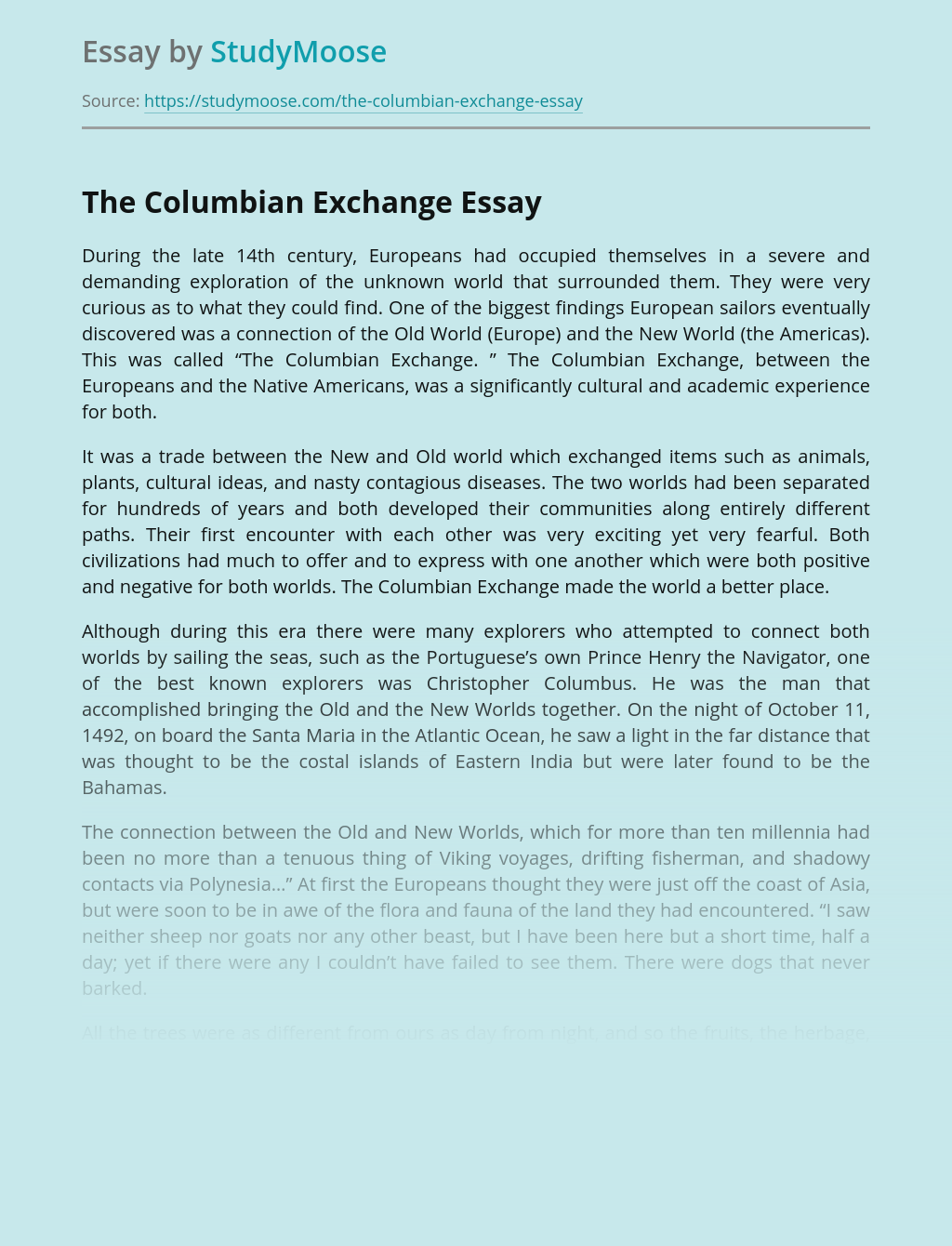 Don’t waste time
Get a verified writer to help you with The Columbian Exchange
Hire verified writer
$35.80 for a 2-page paper
Stay Safe, Stay Original