The causes of the break up of the Union

The American Civil War was the bloodiest American War, which placed brother against brother and tested the will of the Union. There were many causes to the breakup of the Union in 1860 to1861, but there are three that stood out the most. Many people believe that the Civil War was a war fought solely over slavery, but the reality was it was fought on several fronts. The three main causes were: the passage of the Kansas-Nebraska Act, the decision of the Dred Scott case, and the South’s cultural influenced fanaticism on slavery.

Turn in your highest-quality paper
Get a qualified writer to help you with
“ The causes of the break up of the Union ”
Get high-quality paper
NEW! AI matching with writer

In 1854 Kansas territory wanted become a state. The only question left to be decided was whether it would be a slave state or a free state. Stephen Arnold Douglas, the Democratic Senator of Illinois, strongly believed that the people of the territories should decide for themselves whether they wanted slavery. He sponsored the Kansas Nebraska bill and said that Kansas should be split into two states Kansas and Nebraska and that the question of slavery would be left to the vote of the settlers.

He called this principle popular sovereignty. The debate over the question of slavery in the territories became more of a problem than expected.

Proslavery and antislavery groups fought many wars, each side wanting to gain control of Kansas so they could have more power in Congress. More power would mean more votes for or against slavery. The bill also had its flaws. The law said that the people of Kansas were free to decide on slavery but the territories were not sovereign political units so they were not entirely free.

This also caused controversy between the two sections. The wars were known as “Bloody Kansas.” Neither side knew it, but with each day of fighting, they were getting a step closer to the Civil War.

In 1846 Dred Scott, a slave from Missouri, was involved in a case that would further the separation between the North and the South. After his master died, Scott tried to sue Missouri for his freedom claiming that since he lived in Illinois and was a resident there that he was no longer a slave, for slavery was barred under the Northwest Ordinance. Also he was a citizen in the Wisconsin Territory, where slavery was outlawed under the Missouri Compromise. Chief Justice Roger Taney declared that blacks were not citizens therefore Scott had no right to sue the court. Furthermore, the court ruled that his residence in the Wisconsin Territory did not make him free because the Missouri Compromise had been ruled unconstitutional.

Taney’s controversial decision in the case widened the breach between the North and South and further aggravated debates over slavery. Southern justices argued that according to the Bill of Rights, the federal government could not deprive anyone of their right to life, liberty or property. The northerners were angered by the courts decision to employ the Bill of Rights in order to keep blacks in slavery. This case was a controversy for years. The problem wasn’t that Scott had to return to being a slave but that the decision made slavery a national institution instead of it being a local one. It widened the gap between the two sections, the North and the South, feeding a fire that was to burn the rope holding the two together in union.

As the North gained power over the national government, the northern Free-Soilers and the Abolitionists pressured the South on the issue of slavery. In a world where “Cotton is King” the institution of slavery grew at the crack of a whip in order to fatten the pockets of the social elites. Their entire economic system was based on the institution of slavery. That is why they were so fanatical about it and that is why they refused to let it go. When the North went against the Constitution by allowing fugitive slaves to reside in northern states and not returning them to their owners, as was their duty under the Fugitive Slave Act, the South threatened succession.

The South now had no safety net and their economy would fail without the manual labor of slaves. The North did require the same type of cruel labor that the South required with the tobacco and cotton fields in their own factories. With the influence of the Industrial Revolution in the North, slavery was fading away. The two sides debated back and forth over slavery. When the North denied the Southern states the right to secession, the South thought the North was denying them their constitutional rights. The two sides stood at Fort Sumter, South Carolina for the first shot. With the first Southern shot, the South succeeded and the Civil War began.

In conclusion, the Civil war occurred due to a combination of small events that, had they not occurred, so many lives could have been saved. The diversity between the North and the South really influenced the decision the South made to secede. They figured that they were so different from the rest of the country might as well be separated. Events such as the decision of the Dred Scott case and the signing of the Kansas Nebraska Act were main causes to the break up of the Union but the underlying and most important issue was slavery.

The causes of the break up of the Union. (2016, Jul 15). Retrieved from https://studymoose.com/the-causes-of-the-break-up-of-the-union-essay 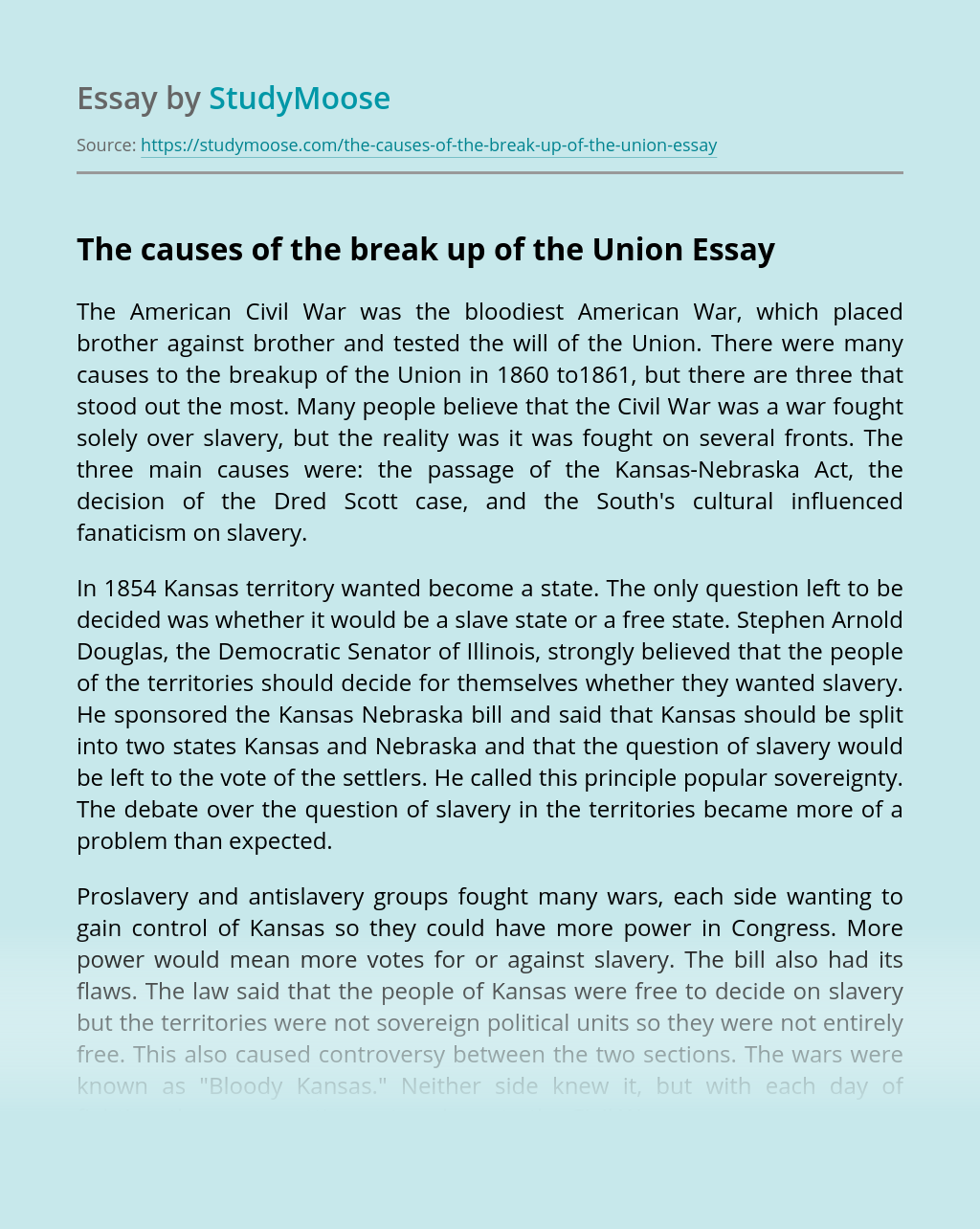 Turn in your highest-quality paper
Get a qualified writer to help you with
“ The causes of the break up of the Union ”
Get high-quality paper
Helping students since 2015
Stay Safe, Stay Original