The Book Thief by Markus Zusak

Death uncloaks himself and steps out of the shadows extending his hand to greet the reader as soon as a copy of The Book Thief by Markus Zusak is opened. With these words the narrator of the story, death, describes himself in a manner that one would never have imagined before, making the power of words shine bright on the first page. Throughout The Book Thief, the power, irony, and usefulness of literature is shown in the setting of Nazi Germany during World War II.

Don't use plagiarized sources. Get your custom essay on
“ The Book Thief by Markus Zusak ”
Get custom paper
NEW! smart matching with writer

A young girl by the name of Liesel Meminger becomes a master of her own with words. Liesel scratches out a meager existence for herself by stealing something she can’t resist–-books. With the help of her foster parents and an unlikely stowaway Liesel learns that without knowing the force of words, it is impossible to know more.

Liesel learns that through knowing the power of words, you can achieve greatness in life. These lessons are learned through a story, a beating, and an autobiography.

With words written on a page, Liesel learns her first lesson. Through this story Liesel realizes that the force of words is what holds the country under the power of Hitler and the Nazi party. …the Fuhrer decided that he would rule the world with words. “I will never fire a gun,” he devised, “I will not have too…” His first plan of attack was to plant the words in as many areas as him home land as possible… He watched them grow, until eventually; great forests of words had risen throughout Germany… It was a nation of farmed thoughts (Zusak pg.

As a part of The Word Shaker featured within The Book Thief, Max, a Jewish stowaway, explains in his own way how Adolf Hitler came to power over Germany. Max explains how the strength of words alone can be more deadly than a gun. In Hitler’s hands, manipulated words took many prisoners, and in The Word Shaker Max explains how Liesel was silently breaking free. Liesel was using her words for good, and in return other word shakers helped her steal back words. During World War II, Hitler uses words as a weapon and uses them to spread propaganda and to destroy other words in book burnings. Hitler knew the power of words could sway an entire nation to do bad things. But Liesel was also able to remember that they could do extreme good, even if she had to learn how they could do bad first. In The Book Thief, Liesel learns the effects words can have when used negatively and powerfully. “Blood leaked from her nose and licked at her lips.

Her eyes had blackened. Cuts had opened up and a series of wounds were rising to the surface of her skin. All from words. From Liesel’s words” (Zusak pg. 253). Liesel explodes at Ilsa Hermann, calling her pathetic and telling her to get over the death of her son. She imagines Ilsa’s face becoming physically battered by Liesel’s cruel invective. Liesel later comes to regret her tirade, as she realizes the power of words to inflict harm on others. This is a lesson Liesel holds tightly too for the rest of the book. “I have hated the words and I have loved them, and I hope I have made them right”(Zusak pg. 528) After encountering Max being forced on the way to a concentration camp, Liesel becomes hopeless and disdainful of the written word, seeing Hitler’s words as the source of her suffering. Ilsa Hermann gives her a blank book and encourages her to write. In response, Liesel writes the story of her life, containing both tragedy and beauty.

As Liesel puts down words on paper it gives them deeper meaning and infuses them with her own voice. Through this process, Liesel comes to the realization that words can cause both violence and comfort, and she strives to make them “right” by combating vicious propaganda with writing that emanates from selflessness and love. After learning their power, Liesel only hopes to continue to learn and use words in the right way. With the discovery and understanding of strong literary power, the book thief dominated Germany along side Hitler. “I thought of Hitler destroying people with words, and now I had a girl who was stealing them back” says Zusak.

Liesel learns the force of words through each and every experience throughout The Book Thief. With each discovery, Liesel learns more and more, continuing to grow and use words and their meaning the “right way”. The Book Thief is a powerful book with powerful language that teaches any reader the force of words and their consequences. As soon as Liesel is taught to read and write, her life becomes a classroom, where she is free to learn and explore within the pages of every book she is given and steals. young girl who understands the power of words is capable of defying the Fuhrer through words of compassion and love.

The Book Thief by Markus Zusak. (2021, Nov 08). Retrieved from http://studymoose.com/the-book-thief-by-markus-zusak-2-essay 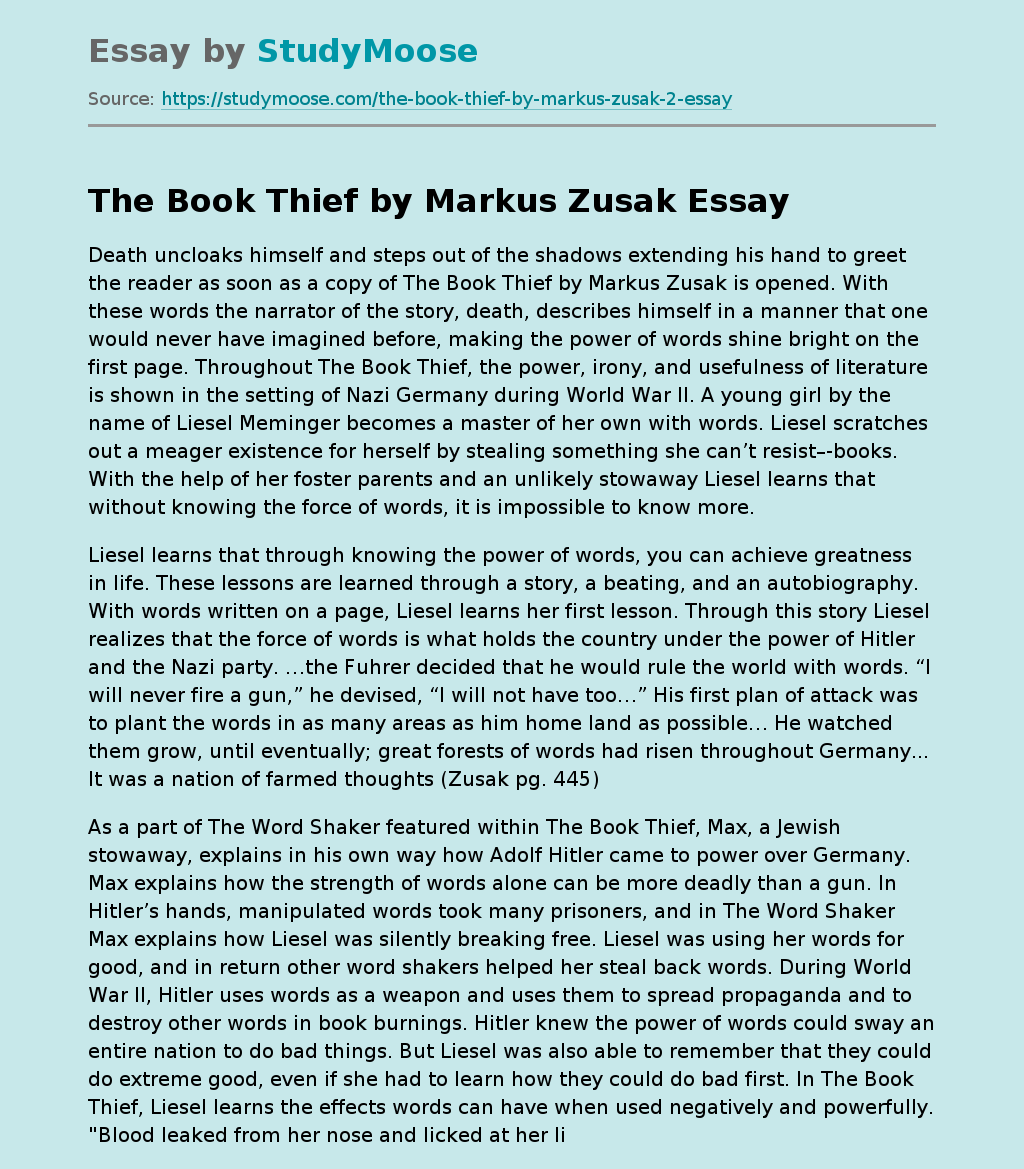