Innocence is something that all of us know and relish. It is something sweet and peaceful that we all deem precious. In the novel ‘The Book Thief’, one little girl possesses this trait, in a very surprisingly place. In the heart of Nazi Germany, Liesel Meminger’s innocence is easily distinguished. In the story, Liesel Meminger is forced to adapt to a new family and environment due to her past traumatic experiences. Throughout part one of the book, Liesel shows her juvenility on numerous occasions shown by her interactions with others, in what she says, and through her attitudes.

Don't use plagiarized sources. Get your custom essay on
“ Innocence of Liesel Meminger ”
Get custom paper
NEW! smart matching with writer

Rosa Hubermann was walking around their neighborhood to show Liesel her job, collecting clothes from the wealthy to iron. Upon arrival at a house, Rosa Hubermann told Liesel, “‘You go.’ Liesel was horrified. A giant brown door with a brass knocker stood atop a small flight of steps. ‘What?’ Mama shoved her ‘Don’t you ‘What’ me, saumensch. Move it.’” (The Book Thief, Hardcover Pg.

42) This shows that Liesel is juvenile because she is terrified at her mama’s orders even though the job is simply to collect clothing.

Also, she was in such disbelief at her mama’s decision when she was forced to retrieve the clothing because she never thought her new mama would put her in a position to bring her tremendous discomfort. Liesel is performing her usual routine, cleaning the spat saliva off the front porch from the mouth of Frau Holtzapfel. “…once in a while some stars had the nerve to rise and float, if only for a few minutes.

On those nights, she would stay a little longer and wait. ‘Hello, stars.’” (The Book Thief, Hardcover Pg.45) Due to Liesel’s young imagination, she takes the time to converse with the stars. Any adult would not even regard the stars let alone talk to them because they have lost the innocence found in childhood, but Liesel is different and takes the time to do such things.

Still in disbelief of her brother’s recent death, she is on her knees at her brother’s icy cold grave, digging in denial. “Somewhere in all the snow, she could see her broken heart, in two pieces.” (The Book Thief Hardcover Pg.24) This shows how Liesel is innocent because when all she loves is seized in that graveyard she is lost and does not know what to do. It was the cold graveyard, the thought of her mom leaving her forever in the midst of her younger brother’s death that overwhelmed Liesel to a broken heart.

The Book Thief by Markus Zusak is important to read because it reveals something special in an very unexpected place. Germans who lived in Nazi Germany are still to this day commonly stereotyped as being ruthless and hate filled. Liesel has given a previously unseen perspective of these times, a look through the eyes of an innocent child that knows nothing of bitter hatred and antagonism. This is all easily perceived through her interactions with other characters , her own dialogue, and attitudes. 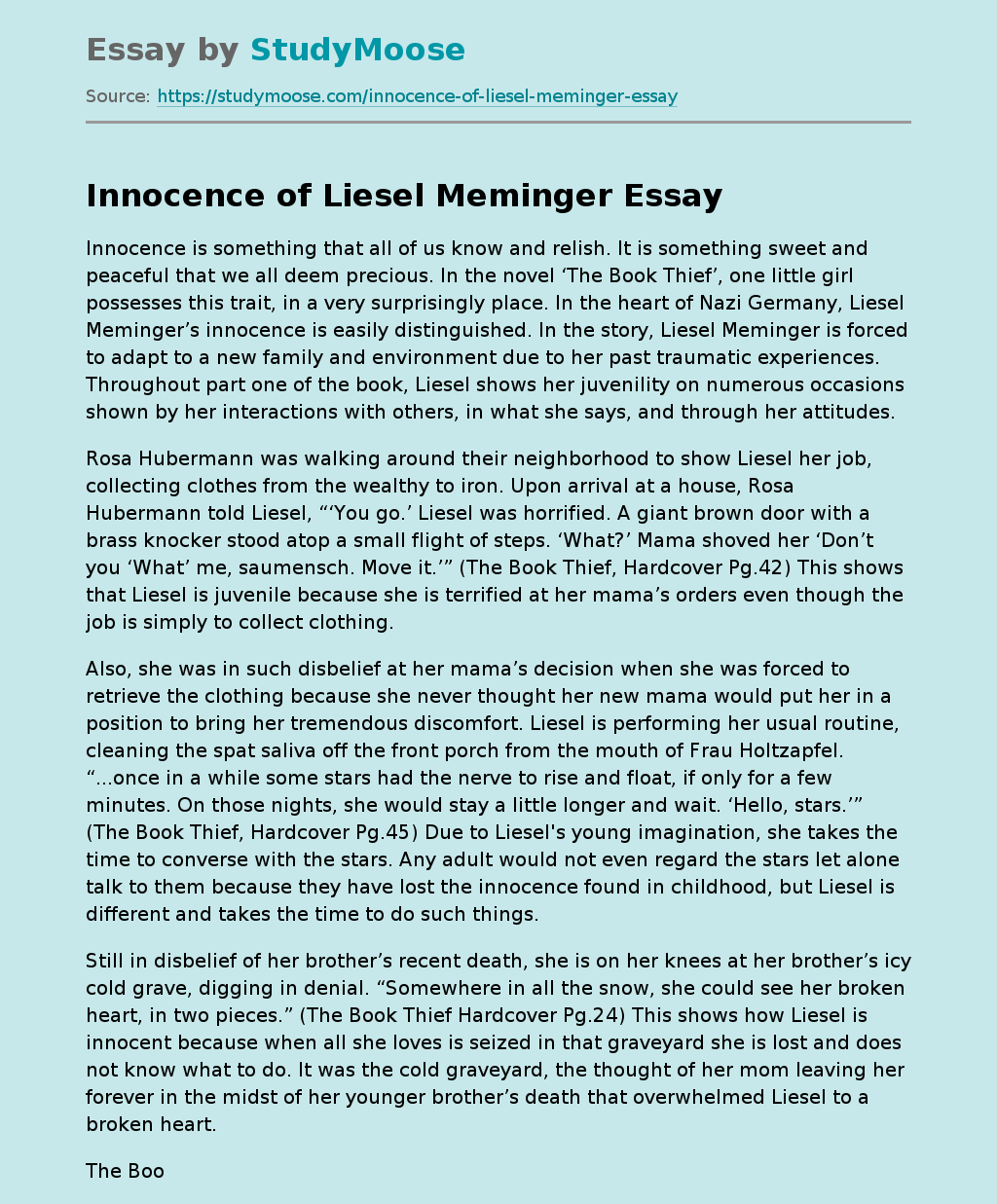